Gaining Insights from Candida Biofilm Heterogeneity: One Size Does Not Fit All
Previous Article in Journal

Review
Candida albicans Hyphae: From Growth Initiation to Invasion
by

:
Candida albicans is a commensal resident of the human gastrointestinal and genital tracts. Under conditions such as dysbiosis, host immune perturbances, or the presence of catheters/implanted medical devices, the fungus may cause debilitating mucosal or fatal systemic infections. The ability of C. albicans to grow as long filamentous hyphae is critical for its pathogenic potential as it allows the fungus to invade the underlying substratum. In this brief review, I will outline the current understanding regarding the mechanistic regulation of hyphal growth and invasion in C. albicans.
Keywords:
Candida albicans; hyphae; invasion

The fungal hypha is a manifestation of anisotropic growth: a non-uniform cellular volume expansion along a polarized axis. In higher eukaryotes, the cell-types arising in this manner serve diverse roles in organismic life-style. For example, in plants, the sclerenchymic fibers provide structural support, while root hairs developed from the trichoblasts are critical for water absorption [1]. In animals, anisotropic expansion regulates the precise patterning in a developing tissue [2]. In fungi, anisotropic growth as hyphae, a trait proposed to be evolved from the flagellar protists upon terrestrial colonization, not only compensates for the motility loss but also functions in nutrient acquisition, niche colonization and mating [3,4]. In the human pathogenic fungus Candida albicans, hyphal growth is clinically relevant as it is a critical driver of pathogenesis in symptomatic mucosal infections such as oral thrush and vaginal candidiasis, as well as fatal systemic infections. In these infections, the infected tissues often contain invading hyphae and in agreement, the C. albicans hyphal-defective mutants show defects in their virulence [5,6,7,8]. Given the importance of hyphae in virulence, hyphal morphogenesis in C. albicans has been an area of rigorous investigation.
Fundamentally, hyphal growth requires symmetry breaking and establishment of a polarity axis along which anisotropic cellular expansion can occur. Upon establishment of the axis for anisotropic expansion, hyphal growth initiates with emergence of a germ-tube from the area marked by polarity landmarks [9,10,11,12,13]. The germ-tube then extends and grows exclusively via growth at the tip. The exclusive tip expansion requires a plastic cell-wall at the tip, with elastic cell-walls laterally. The hydrostatic-pressure driven cytoplasmic forces expand the plastic cell-wall at the tip and thus drive the hyphal growth. In agreement, C. albicans hyphal growth rate is substantially retarded in hypertonic media [14]. The cytoskeleton, on the other hand, maintains directional growth via directing the vesicular flow for tip expansion, without much contribution to the cell-wall expansion forces. Indeed, actin disruption in growing hyphae, although disrupts the hyphal growth, still leads to isotropic cell-wall expansion and hyphal tip swelling [15]. Moreover, concurrent to the tip-expansion, the C. albicans hyphae undergoes mitotic cell division without constriction at the mother- and daughter cell boundaries and cell separation, thus leading to parallel-walled hyphal formation [8,16]. Hyphal growth also leads to a hyphal-specific transcriptional program which paves the way towards upregulation of virulence-related processes, such as increased adherence, biofilm formation and cellular invasion [17,18]. In the sections below I will highlight the key findings which have provided invaluable insights into the molecular regulation of the hyphal growth, directionality maintenance and invasion.

As highlighted under introductory paragraphs, the cytoplasmic forces driven by hydrostatic pressure (turgor), similar to the other fungi [64], may drive C. albicans hyphal invasion as well. In addition, C. albicans also harbors proteases that may directly assist in invasion [5,65]. In case of the hydrostatic pressure or turgor, as it is isotropic in nature, the force is exerted uniformly across all direction. In a growing hypha, actin cytoskeletal disruption leads to isotropic hyphal tip swelling, which clearly demonstrates the isotropic nature of turgor [15]. Which molecule contributes to turgor? The plant pathogenic fungi utilize glycerol for invasive growth [66], however C. albicans mutants which are defective in accumulating glycerol are not defective in hyphal growth [67]. The glycerol defective hyphae, on the other hand, are defective in invasion in vitro, as well as in virulence in a mouse model of intraabdominal candidiasis [68,69], implying a putative role for glycerol in supplementing additional forces needed to invade. Since glycerol has no roles in hyphal morphogenesis, additional osmolytes that serve the critical functions in hyphal morphogenesis, as well as invasion, still remain to be defined. Regardless, mathematical modeling suggests that if hyphal turgor (due to overall cytoplasmic content) reaches a magnitude that is equivalent to or greater than the elastic modulus of the substratum, the hyphae can initiate invasion; subsequent to which, the invasion rate depends upon turgor, substrate’s elastic modulus and cell-wall extensibility at the tip [68]. Direct real-time imaging of hyphal cells pushing against microfabricated obstacles revealed invasion forces resulting from turgor of ~1.2 MPa [33]. Interestingly, the real-time imaging experiments also showed that hypha grows along the substrate, tip-down with Spitzenkörper oriented towards the substrate, without invasion [33]. Upon encountering the substrate perpendicular to its growth axis, the hypha pushes into the material and then reorients the growth trajectory along the surface, in Cdc42 and Rsr1 dependent manner [29,33]. It is yet uncharacterized at what point, then, invasion occurs and what physicochemical cues regulate surface-associated versus invasive growth switch. Based on the data so far, it can be postulated that at-first, the three-dimensional surface associated growth as a biofilm ensues which then signals the hyphae in contact with the substrate to invade.
In addition to the fungal mediated active invasion mechanisms, the host tissue invasion elicits a host-assisted invasion mechanism. For example, the endothelial and epithelial cells actively endocytose C. albicans via N-cadherin, E-cadherin, and EGFR/HER2 [70,71]. The endocytic uptake is mediated via fungal cell wall proteins such as Als3/Ssa1 which, upon binding to aforementioned host proteins, induce endocytic uptake in clathrin and endothelial Septin-7 dependent manner [70,71,72,73]. The host cytokines can also affect the endocytic invasion. For example, Solis et al. recently showed that IFN-γ leads to production of kynurenins, which act on the aryl hydrocarbon receptor (AhR) for a prolonged activation and inhibits EGFR-dependent fungal endocytosis [74]. Future studies aimed at understanding how the other host immune mediators such as cytokines, chemokines affect epithelial endocytic fungal invasion will provide further insights into this mechanism. The tissue-resident mononuclear phagocytes also rapidly take up the fungus via phagocytosis [75,76,77]. Ex vivo it has been shown that the hyphae can escape the phagocytes [78,79], however how much this contributes to subsequent tissue invasion is not known.
In order to understand the relative contributions of each invasion mechanisms in cellular invasion, experiments have been carried out using dead fungus and/or host-cell cytoskeletal disruption, which showed differential utilization of invasion mechanisms depending upon the cell-type in question [80,81]. For example, enterocyte invasion required major contribution from active mechanism while oral epithelial cell invasion utilized endocytic uptake as well [81]. Among the different genes that mediate the invasion, the glycerol-deficient mutants are defective in damaging oral epithelial cells and are defective in invading enterocytes ex vivo [69,82]. Similarly, other genes such as RSR1 (Ras-like GTPase), BUD2 (Rsr1 GAP), CKA2 (protein kinase acting in the calcineurin pathway), BCR1 (transcription factor responsible for adhesin and biofilm-related gene expression) and HWP1 (hyphal wall protein and adhesin) are also critically required for invading the enterocytes ex vivo [69]. The above genes mediate enterocytes invasion but are dispensable for oral epithelial invasion. On the other hand, genes in the cAMP/PKA pathway, RAS1 (Ras-family GTPase), RIM101 (alkaline pH induced hyphal regulator), and HGC1 (G2 cyclin) are required for invasion into the both cell-types [69]. The relative contribution (and cooperation) of lytic vs. turgid and passive endocytic mechanism in tissue invasion remains to be characterized.
In summary, C. albicans employs a combination of strategies to invade the underlying substrata, including abiotic substrata of implanted medical devices. In host tissue invasion, cooperation between host-assisted uptake and the active fungal mediated invasion is likely. Experiments using cell monolayers showed the active invasion mechanism to be a major contributor [80], however the relative contributions of each, in vivo, are yet to be examined. Further studies will illuminate the molecular regulation of invasion mechanisms and their impacts on pathogenicity.

This work was supported by the funding from Division of Intramural Research (DIR) at NIAID/NIH. I would also like to acknowledge Aaron P. Mitchell, Frederick Lanni and Michail S. Lionakis for their support and guidance. 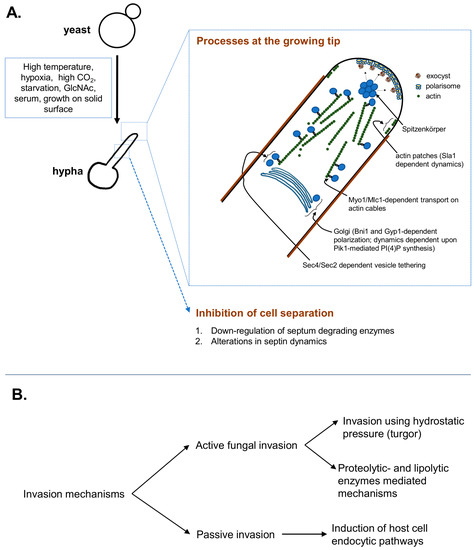 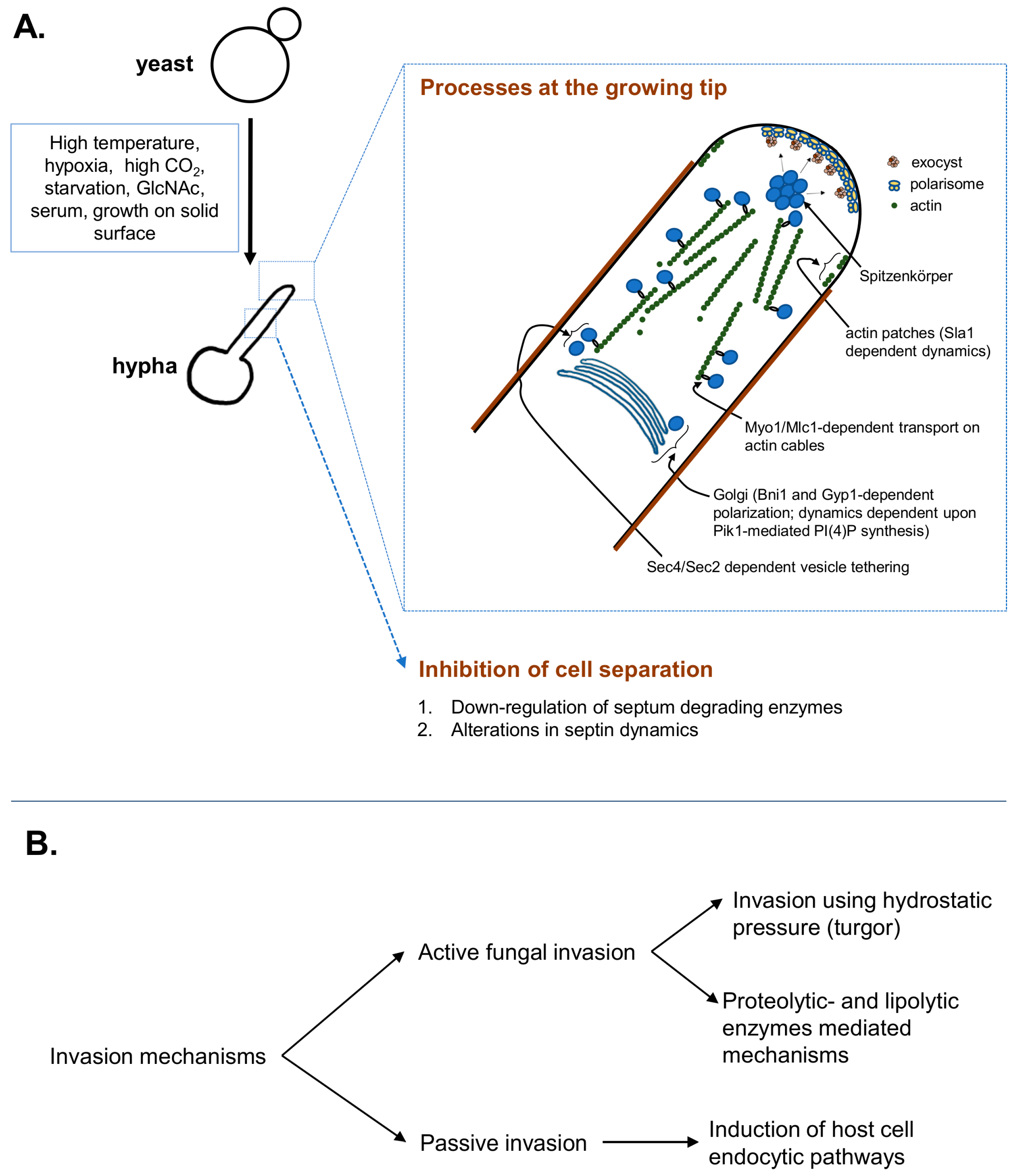