The CWI Pathway: Regulation of the Transcriptional Adaptive Response to Cell Wall Stress in Yeast
Previous Article in Journal

HIV-Associated Cryptococcal Disease in Resource-Limited Settings: A Case for “Prevention Is Better Than Cure”?
Previous Article in Special Issue

Function and Biosynthesis of Cell Wall α-1,3-Glucan in Fungi

Fungi are organisms able to colonize every habitat across the world. Like plants, fungi do not actively move, and they spread in the environment by producing small spores that can be easily transported by atmospheric carriers (e.g., wind and water flows) and animals. As with every organism on earth, during their life cycle, fungi are actively challenged by environmental changes, e.g., parasites and predators, and they have evolved an incredible ability to adapt to different ecological niches and compete with other organisms. In particular, fungi can produce a large arsenal of compounds that are specifically synthetized to increase their fitness. Many of these active molecules are produced in secondary metabolism and include a wide range of low-molecular-weight chemicals [1]. These chemicals are normally classified as natural products (NPs) and they belong to the class of polyketides, small peptides, terpenoids, alkaloids, and phenols [1]. The different roles of NPs are vast and they are likely produced not only to serve as defense compounds, but also as toxins, which can be relevant for infection processes. Additionally, some NPs can act as metal chelators, and are produced to reduce the fitness of competing organisms by subtracting relevant nutrients, making them more available for the NP-producing organism [2].
Fungal NPs have been employed for diverse applications including antibiotics, antifungals, insecticides, food preservatives, and so on, demonstrating how they are becoming extremely significant for humankind. For this reason, NPs have been largely studied in the last century regarding their synthesis and production. As an example, we know that many fungal NP biosynthetic genes are clustered in their respective genomes and usually entail large multidomain enzymes such as polyketide synthases (PKSs) and/or nonribosomal peptide synthetases (NRPSs) [1,3].
A lot of effort has also been spent on understanding the regulation of NP biosynthesis. In particular, these efforts were focused not only on promoting the increase of NP production, relevant for industrial applications, but also on inducing the expression of silent biosynthesis gene clusters which can potentially disclose new molecules with valuable functions [4]. Specifically, the induction of silent gene clusters became very popular in the post-genomic era. The large and increasing availability of genome data revealed that the knowledge about NPs is very limited if compared with that concerning the computationally identified biosynthetic pathways. This is true even for those organisms that have been extensively studied, which do not produce all their potential chemicals during lab fermenting conditions.

Fungal cells are characterized by the presence of a rigid external layer denominated as the cell wall. The fungal cell wall is a dynamic structure that changes during cellular growth, but, during these changes, still conserves its rigidity. The fungal cell wall is principally composed of sugars, such as glucans and chitins, and cell-wall-associated proteins. In many fungi, important components of the cell wall are melanins, which are among the most mysterious secondary metabolites studied. Many genes coding for melanin biosynthesis are well characterized, but the chemical structures of the many different identified melanins are still missing [5,6]. Our knowledge is mainly based on melanin precursors that have been isolated, but the last biosynthetic steps are, so far, unknown [5,6].
The fungal cell wall is also the first layer that interacts with the environment. All the external stimuli need to bypass the cell wall; these signals are then translated to specific responses. Consequently, cell wall stress is potentially responsible for the induction of a series of stress-responsive factors, including the production of secondary metabolites. After crossing the cell wall, stimuli are translated through complex cellular signals, which normally engage phosphorylation cascades.
Signaling pathways are very well conserved in fungi. The most studied signaling pathways in fungi are: the cAMP pathway, which exploits the formation of cyclic AMP to amplify the activity of responsive kinases; the calcineurin pathway, which responds to intracellular calcium homeostasis; the TOR pathway (target of rapamycin), which mainly regulates cellular nutrient and energy levels; and the mitogen-activated protein kinase (MAPK) signaling pathways [7,8,9]. The cell wall integrity (CWI) signaling is one of the MAPK signaling pathways. MAPK pathways are highly conserved among eukaryotes, and are distinguished by a central module composed of three protein kinases. All fungi usually contain three main MAPK pathways: the pheromone responsive pathway, the high osmolarity glycerol (Hog) response pathway, and the CWI pathway. These pathways are strongly connected to each other, and extensive cross-talk interactions are emerging [10,11,12].

3. The Cell Wall Integrity Pathway Affects the Production of Melanins

4. Mycotoxins, Antibiotics, and Virulence Determinants Affected by the CWI Signaling

In the last several years, scientists have been very inventive in developing growth conditions that could activate silent gene clusters. In particular, they have tried to reproduce environmental stress situations to stimulate stress responses and obtain potentially active molecules. For example, fungi have been co-cultivated with different organisms to induce the expression of potential active molecules [70].
The rational manipulation of signaling pathways can be a very straightforward strategy to activate silent gene clusters. However, the works reported so far were mainly focused on investigating the effects of gene deletion/disruption on secondary metabolite production. As shown in this review, in many cases, the inhibition of the CWI signaling pathway negatively affected the production of relevant molecules such as antibiotics and mycotoxins. The discovery of new mycotoxins can be very important because these molecules can also be employed as therapeutics. For example, gliotoxin was found to induce apoptosis in myeloma cell lines, proposing its possible use as a chemotherapeutic drug [41]. Moreover, sphingolipid inhibitors, such as fumonisins, can be potentially used to cure sphingolipid disorders in humans; these disorders have been associated with various diseases, including diabetes and schizophrenia [71]. Following this principle, we are still lacking studies on secondary metabolite cluster expression occurring as a consequence of signaling pathway activation. With the advent of synthetic biology, we are learning daily how to manipulate signaling on demand. The majority of these studies, as usual, have been conducted on model organisms such as S. cerevisiae [72]. However, because the signaling pathways are much conserved, it is possible that this knowledge can be transferred to secondary-metabolite-producing fungi in order to discover hidden compounds. A synthetic activation of CWI signaling in S. cerevisiae has already been performed by mutating the pkc1 gene. This change of the arginine in position 398 with an alanine residue induces a constitutively higher activation of the CWI signaling [73]. Similarly, the same mutation in A. nidulans was also able to increase the MpkA phosphorylation status [74].
Taken together, all the data presented so far suggests that the manipulation of the CWI signaling pathway could be a useful tool to activate defense mechanisms in fungi, including the production of still-unknown active molecules that could have clinical and industrial applications.

This work was supported by the Leibniz Research Cluster (LRC). I am thankful to Derek J. Mattern for editing the manuscript. 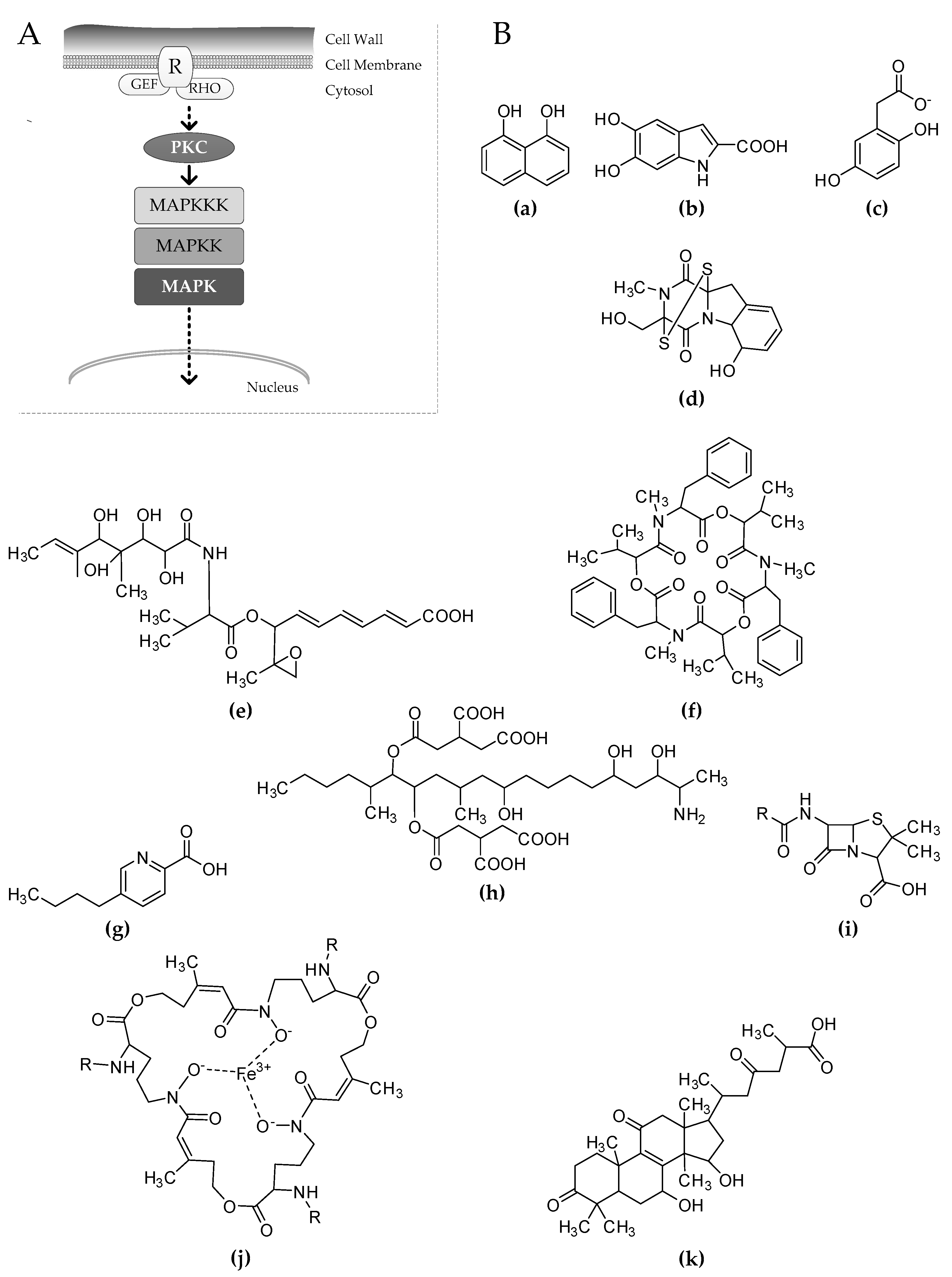