Ultrasonographic Diagnosis of Urachal Anomalies in Cats and Dogs: Retrospective Study of 98 Cases (2009–2019)

Prevalence of Disease and Age-Related Behavioural Changes in Cats: Past and Present

(1) Background: age-related changes in behaviour and health may be thought of as “normal” ageing; however, they can reflect under-diagnosed, potentially treatable, conditions. This paper describes the prevalence of age-related behavioural changes and disease in two UK cat populations at separate time-points. (2) Methods: owners of cats aged ≥11 years completed questionnaires in 1995 (cohort 1: n = 1236), and from 2010–2015 (cohort 2: n = 883). (3) Results: the most important behavioural changes in these cats were increased affection towards their owners (reported by 51.9% in 1995; 35.8% in 2010–2015), increased vocalisation (63.5%; 58.9%, respectively), particularly at night (32%; 43.6%), and house-soiling (29.3%; 55.8%). Most (79.4%; 81%) of the cats had visited a veterinary surgeon since becoming 11 years old. The main reasons, aside from vaccinations, were dental disease, renal disease and lower urinary tract disorders in 1995, and dental disease, renal disease and hyperthyroidism in 2010–2015. All major diagnoses were reported significantly more frequently in 2010–2015 than in 1995; behavioural changes were variably associated with these diseases. (4) Conclusion: elderly cats display age-related behavioural changes and develop diseases that may be under-diagnosed. Veterinarians need to ask owners about these behavioural changes, as they may signify manageable conditions rather than reflect “normal” ageing.
Keywords: normal ageing; elderly cats; behavioural changes; prevalence of disease normal ageing; elderly cats; behavioural changes; prevalence of disease

With improvements in nutrition and veterinary medicine, the life expectancy of pet cats is increasing and the number of elderly cats seen by veterinary surgeons is growing [1,2,3,4]. Approximately 30–50% of pet cats in the United States are now believed to be of seven years of age or older [5]; 13% of the cats are aged 12 years or older [5]; and there was a 15% increase in the number of cats over 10 years of age seen at veterinary clinics from 1983 to 1993 [6]. A study of insured cats in Sweden confirmed this trend, with 58% of Birman cats surviving to 12.5 years of age during 1999 to 2002, whereas between 2003 and 2006 this increased to 68% survival to this age [7]. Similarly, with Siamese cats, survival during the two periods increased from 33% to 42% [7]. In the UK, there are currently believed to be approximately 2.5 million ‘senior’ cats [4,5,6,7,8]. The management of these individuals is becoming increasingly important for small animal veterinary practitioners, as they constitute a large population of patients.
Details about age-related behavioural changes and common diseases seen in elderly cats have been reported previously [9,10]. Recognising behavioural changes that are common in old age is important as they can result from systemic diseases, intracranial pathology or neuronal degeneration [9,10]. Behavioural changes may develop before any other signs of illness, highlighting the importance of their early recognition. Some of the most common age-related behavioural changes include house-soiling, excessive vocalisation, altered sleep cycle, and disorientation [9,10]. The most common medical problems seen in elderly cats include mobility disorders (e.g., osteoarthritis); endocrine disease (e.g., diabetes mellitus, hyperthyroidism); hypertension; neurological disease (e.g., neoplasia and sensory deficits); organ failure (e.g., kidney, heart, and liver failure); and cognitive dysfunction syndrome [9,10]. Alongside this, geriatric patients are more likely to be presented with co-morbidities [9,10], resulting in the need for polypharmacy, which can make their management challenging, although rewarding, nonetheless.
Veterinarians can suggest many ways that owners can help their elderly cats. These include showing the owners what behaviours are normal and which ones may be a cause for concern and need to be investigated, as well as suggesting ways of adapting their homes and lifestyles to best accommodate their ageing cats to support a long and comfortable life [4]. In order to give the best advice to owners, veterinarians need to know how cats change with age. While they can learn a great deal by reading reference texts and looking at clinic records these can only help so far, they also need to listen to the cats’ owners. This is because owners can identify subtle changes in their pet (without necessarily understanding the significance of them). Unfortunately, the changes may not be apparent in a veterinary clinic because the stress of being there leads the cat to alter its behaviour. Being able to recognise abnormal clinical signs relies on understanding what changes are within the realms of normal ageing, and what are not. This paper provides evidence about the most common behavioural changes and diseases seen in elderly cats, according to their owners, in two large groups of pet cats in the UK. These findings will enable both cat owners and veterinarians to recognise these changes, and to differentiate between normal and abnormal; by doing this, specific cats’ requirements can be met, improving their quality of life and welfare.
The first aim of this paper was to describe the most common behavioural changes as well as the most prevalent diseases seen in elderly cats: this was performed by assessing two different cohorts of cats, one in 1995 and another one from 2010–2015. The investigation then assessed changes in the prevalence of these behaviours over the intervening 15 to 20 years.

Data were collected through surveys of two different cohorts of owners of elderly cats. The first questionnaire was available in 1995, for six months, while the second was available online, from 2010–2015.
The questionnaire in 1995 (“The Elderly Cat Survey”) was designed by one of the authors (VH) and consisted of two-pages containing 24 open and closed questions (Supplementary material 1). The open questions were included to gain an insight into the quality of the relationship between the owner and the cat. The survey was promoted in regional (The West Briton) and national newspapers (The Daily Telegraph), and a cat magazine (“All About Cats”); owners of a cat of 11 years of age or older were asked to forward a stamped self-addressed envelope (SAE) if they would like to be sent a copy of the questionnaire to complete and return. They were told that their data would be included in a study that would be submitted as part of a degree and potentially published.
In 2010, a second questionnaire was designed to gain more up-to-date data to see how things had changed in the intervening years. However, the SAE method of data collection was considered outdated and insecure, so the second questionnaire was available online. Not all questions included in the first questionnaire were included in the second, as they had been difficult to analyse; new questions were added to try to improve clarity. This questionnaire was available on the Vet Professionals website (http://www.vetprofessionals.com/) from 2010 to 2015; this company runs numerous online questionnaire studies, collecting, collating, and storing the data. This questionnaire consisted of 44 questions, of a similar design to that used in 1995, combining open and closed questions (Supplementary material 2). The questionnaire was accessible worldwide; but only UK data was analysed further. Owners were asked to reply for their own cat of 11 years of age or older.
Owners did not necessarily answer every question for every cat, so the analysis was completed on the data that were available for each individual question. Frequencies are reported with numbers and percentages of responses received. As the online questionnaire was available for a number of years, some cats had multiple entries, some fully and others only partially completed. If more than one copy was submitted, only the first completed questionnaire was included.
The questionnaires from 1995 and 2010–2015 were analysed separately using Minitab 17 Statistical Software (2010) (Minitab Inc. Coventry, UK). Data from both questionnaires was treated as categorical to determine whether a certain behaviour was associated with age by performing ordinal, nominal or binary logistic regression, depending on the number and/or order of the categories for each variable. For all regression models, the different behaviours and/or diseases were adjusted for age. Default terms in the model with no interactions were used, with two-sided 95% confidence intervals and a significance level of α = 0.05. Goodness-of-fit tests were calculated by the Pearson’s chi-square method for both ordinal and nominal logistic regression and by the Hosmer–Lemeshow method for the binary logistic regression. This compared cats within each group and time-period; the cats aged 11–15 years old, 16–19 years and those equal or greater than 20 years old in 1995 were compared with each other, while cats aged 11–13 years old, 14–16 years, 17–19 years, and those equal or greater than 20 years old in 2015 were compared with each other. Two-sample z-test were performed to determine whether there were any differences between the populations of both surveys.
Binary logistic regressions were performed, as described above, on the data from both questionnaires, separately, to assess whether there was a difference between different diseases the owners reported and the age of their cats.
Finally, Pearson’s chi-square and Fisher’s exact tests were performed to determine associations between the different behaviours and disease, where each of the behaviours were compared against each disease, separately. For the 2010–2015 questionnaire, similar responses were grouped together; for this, “a lot less” and “little less” responses were grouped into the “Decrease” group; “little more” and “much more” responses were grouped into the “Increase” group; and “Same” answers remained as they were.
Ethical approval by the Human Ethical Review Committee (HERC) was not requested for this study as it had not been introduced at the time the study started (1994), or when it was repeated (2009). However, the participants of both surveys expressly stated that by submitting their replies they were giving permission for the data to be used for research and publication. In addition, all data were stored and analysed anonymously, complying with current General Data Protection Regulations (GDPR) with regards to storing personal data and participation consent.

Both surveys showed that cats displayed different age-related behavioural changes, with some of them being reported by the owners as increased (Table 1) or decreased (Table 2). The complete list with statistical test results of the logistic regressions can be found in Supplementary material 3.

3.2.1. Vocalisation During the Day

3.2.4. Sociable with Other Animals

3.2.5. Agitation/Irritation for No Apparent Reason

3.3. Visit to Veterinarians and Diseases Diagnosed

Owners were asked what diseases their cats lived with; a summary of the prevalence of these different diseases can be found in Table 3.

3.5. Associations Between Behaviours and Disease

Cats reported as having diabetes mellitus showed no statistically significant associations with any of the behaviours reported in the questionnaires.

3.6. Owner’s Feelings about Their Cats

The authors wish to thank Claire Bessant of International Cat Care for her help in designing the initial questionnaire, Celia Haddon of The Daily Telegraph for interviewing VH for her Weekend Pet Column, and Vicki J. Adams who helped with the analysis of that survey. Thanks to Darren Shaw who helped with the analysis of the second survey. Lorena Sordo’s is supported by funding from CONACyT. 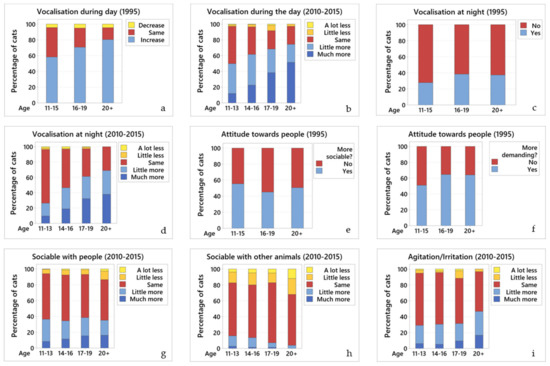 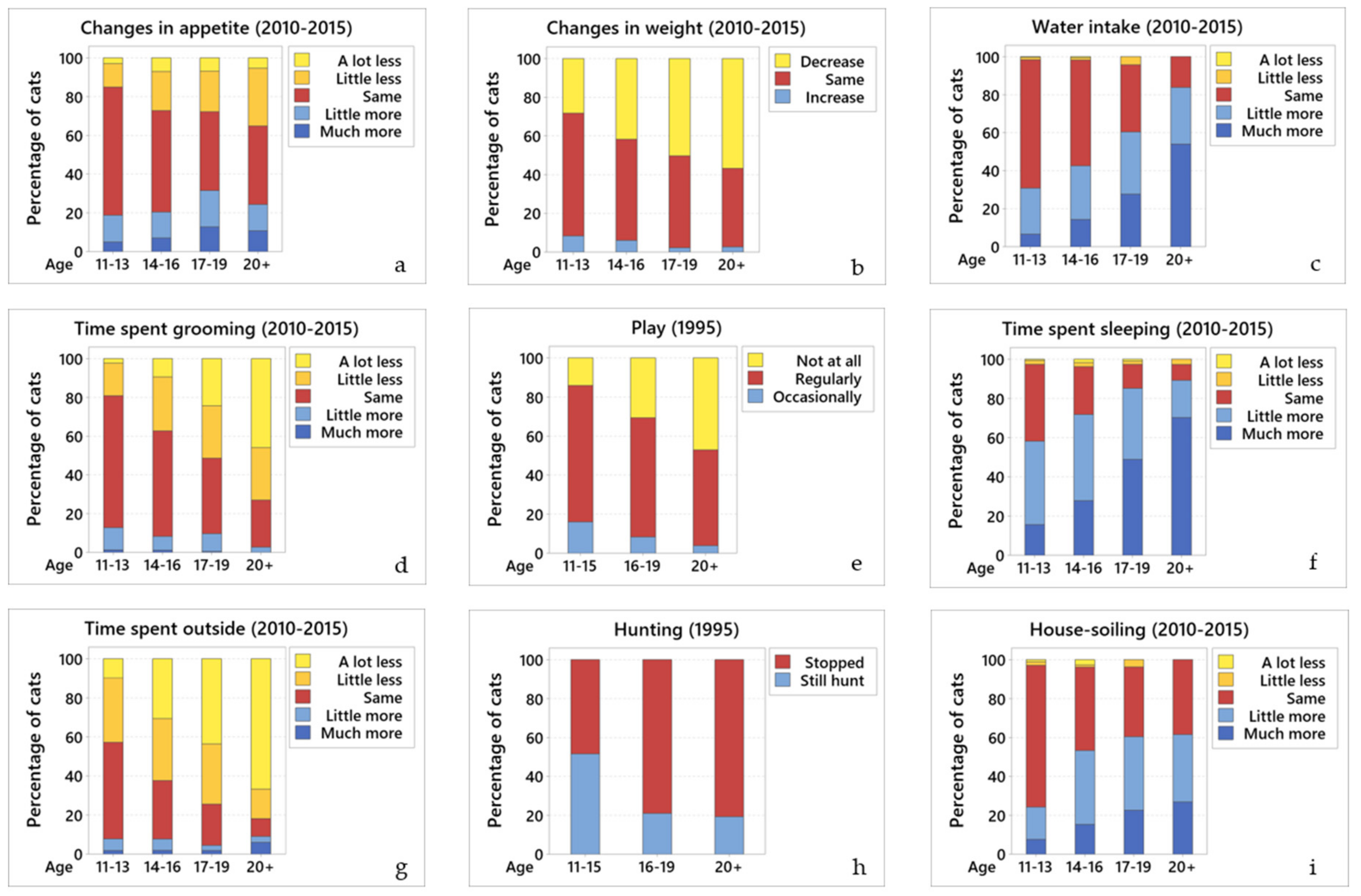