Manipulation of Innate Immunity for Cancer Therapy in Dogs

Relative Bioavailability of Niacin Supplements for Dairy Cows: Effects of Rumen Protection and of Feed Processing

The present study aimed to examine the effective systemic bioavailability of niacin— with particular focus on its galenic form—and feed processing. Experiment 1 was conducted with 35 dairy cows to investigate the effects of various doses of oral supplemented nicotinic acid (NA) either in differing galenic forms (non-rumen protected (nRP) vs. rumen protected form (RP)) on serum niacin concentrations. Experiment 2 was designed as a pharmacokinetic study examining the serum niacin kinetics over 24 h after giving a single oral bolus of 24 g nRP or RP NA admixed in either pelleted or ground concentrate. In both experiments, only the niacin vitamer nicotinamide (NAM) was detected. Results of experiment 1 showed that both galenic forms at a dose of 24 g/cow daily elevated NAM concentrations at the beginning of the experiment. Despite a daily supplementation, NAM concentrations decreased continuously towards the end of the experiment which was more steeply in nRP NA (p = 0.03). On experimental day 21, NAM concentrations were higher when feeding RP NA (p = 0.03) and the highest dose (24 g/day and cow) (p < 0.01). Results of experiment 2 indicated that nRP and RP were characterized by similar pharmacokinetic profiles resulting in similar areas under the curves as a net result of the kinetic counterbalancing alterations. Pelleting seemed not to influence the relative bioavailability. View Full-Text
Keywords: dairy cow; niacin; bioavailability; feed processing; pharmacokinetic dairy cow; niacin; bioavailability; feed processing; pharmacokinetic
►▼ Show Figures 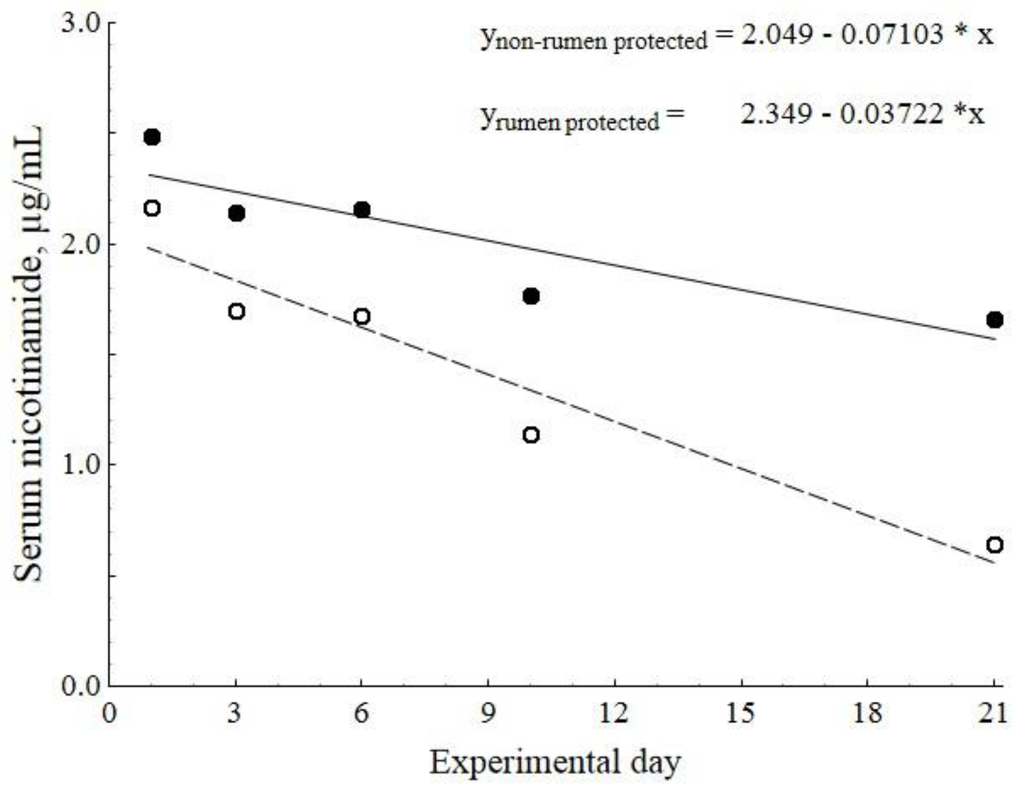