Minerality in Wine: Towards the Reality behind the Myths

The aim of this study was to evaluate the effects of high fat diet with or without grape juice during the pregnancy on gestational weight gain, biochemical parameters, and oxidative stress in plasma and liver from Wistar rats. Forty-nine rats were divided into four groups: control diet group (CD), high fat diet (HFD), grape juice and control diet (PGJCD), and grape juice and high fat diet (PGJHFD). During the treatment the weight gain of the rats was tracked. They had free access to their respective diets during 42 days of treatment. After offspring weaning, the mother rats were euthanized and blood and liver were collected. The high fat diet increased the total cholesterol and triglycerides serum levels as well as carbonyl levels in the liver, however this diet reduced the high-density lipoprotein (HDL) and urea levels in serum. Grape juice consumption reduced gestational body weight gain. In liver, the juice consumption increased sulfhydryl levels and reduced the superoxide dismutase (SOD) activity and TBARS level, in serum the consumption reduced aspartate aminotransferase (AST) and TBARS. We can conclude that the consumption of a diet rich in fat can promotes harmful effects on health during pregnancy, however the consumption of grape juice seems to be an important alternative to prevent oxidative damages and to promote the improvement of health.
Keywords: antioxidants; gestational model; obesity; polyphenols antioxidants; gestational model; obesity; polyphenols

Pregnancy is a process that causes various changes in the maternal physiological state, since this is necessary due to the greater demand for nutrients essential for proper fetal development [1]. A hyperlipidic diet is defined by the above average fat intake of 30 to 45% of the total daily calories [2]. There is a relationship already evidenced in epidemiological studies, as well as in the animal model, that the consumption of a diet rich before and during gestation promoted the development of metabolic disorders, such as adipogenesis, stimulation of chronic inflammation, and oxidative cellular imbalance, factors associated with gestational obesity [3,4]. In addition, excess weight gain during pregnancy may be associated with gestational diabetes, birth difficulties, and even health risks to the fetus during the perinatal period into adult life [5]. Recently studies showed that paternal and maternal obesity increase the chance of breast cancer in female offspring [6,7,8].
As a consequence of these and other modifications, pregnant women, mainly obese ones, are more exposed to deleterious actions that free radicals (FR) and/or reactive species (RE) can cause in an organism [9]. This process known as oxidative stress (OE) is established when the antioxidant defenses are not equivalent or sufficient in relation to the reactive species and their substrates [10]. Still, according to the literature, EO has been frequently related to the etiology of pathological processes that affects the reproductive process [11,12]. In view of this, the consumption of grape derivatives such as grape juice can be an alternative to combat OE due to the presence of nutrients and bioactive compounds with antioxidant action in their composition [13,14,15].
As previously mentioned, among the metabolic and biochemical changes that may be present during gestation, obesity, diabetes, and liver disorders are the ones with the highest incidence in this population [1,5,12]. Pregnancy cholestasis is a heterogeneous disease specific for pregnancy characterized by hepatic dysfunction and intense pruritus [16]. Among the main laboratory findings reported are the plasma increase of hepatic transaminases [17]. In addition to causing harm to maternal health, it is also linked to an increase in fetal morbidity and mortality, and medium-risk perinatal complications such as preterm birth to more severe complications such as fetal uterine death [16,17,18].
Studies from our group have already proven the hepatoprotective effects after the consumption of this beverage [15,19], one of those studies demonstrated that grape juice intake was able to decrease fat accumulation in hepatocytes in a high fat diet model [19]. In addition, a recent study by Wohlenberg et al. (2015) demonstrated that grape juice consumption during the pregnancy and lactation time promoted an antioxidant and hepatoprotective effects in Wistar rats [20].
Maternal obesity is becoming an increasing public health issue, and it is known that nutrition and metabolism play a crucial role in the health and well-being of both mother and fetus [21]. Considering the high fat diet is a common choice in this population, and deleterious effects were already observed [7,22], associated with the findings about the health benefits from grape juice consumption, this study aims to evaluate the gestational weight gain, biochemical profile, and parameters of EO in the serum and liver of Wistar rats. At the time of writing this paper, there were no other studies in the literature demonstrating the possible protective effects that grape juice consumption could promote against the deleterious effect from high fat diet during pregnancy.

Purple grape juice Vitis labrusca L. variety Bordo was kindly provided by Fante drinks. The juice was from the harvest of 2015 and all from the same lot.

Juice samples were diluted 1:100 in water for Folin-Ciocalteau analysis and 1:2 in 40% ethanol for total flavonoids. For HPLC analysis, the pure samples were filtered on 45 m pore Nylon membranes. The total content of phenolic compounds of the grape juices were measured using the colorimetric modification of Folin-Ciocalteau method, as described by Singleton, (1999). Two hundred microliters of grape juice was assayed with 1000 μL of Folin–Ciocalteu reagent and 800 μL of sodium carbonate (7.5%, w/v). After 30 min, the absorbance was measured at 765 nm, and the results were expressed as mg/L catechin equivalent.
The analysis of phenolic compounds was performed on an HP model 1100 HPLC, Lichrospher RP18 column (5 μm) equipped with a 210 nm UV detector and quaternary pump system. The reverse phase analysis consisted of: solvent A, water with 1% phosphoric acid, and solvent B, Acetonitrile. The pumping system of the mobile phase was gradient, with 90% of solvent A from 0 to 5min, 60% of A from 5 to 40 min and 90% of A from 45 to 50 min. The standard flow was maintained at 0.5 mL/min according to Morelli (2011). The samples were filtered on Nylon membranes, 0.45 μm in pore diameter. The phenolic compounds were identified according to their elution order and by comparing their retention time with those of their pure standards. The quantification was performed by the external standardization method, by correlating the area (mAU*s) of the compound peak to the standard curve performed with each standard evaluated (gallic acid, catechin, chlorogenic acid, epicatechin, rutin, ferulic acid, naringin, hesperidin, myricetin, resveratrol, quercetin, and vitexin).

Initially, we used 78 Wistar female and 39 male Wistar rats, 12 weeks old and weighing approximately 290 g from the bioterium of the IPA Methodist University. These animals were placed in a ratio of 2 mating females for each one (2:1), had free access to their respective diets, and were maintained in a light–dark cycle of ±12 h at a temperature of 22 °C ± 1 °C. The entire experiment was conducted with the approval of the Ethics Committee on Animal Use (ECAU) of the Methodist University Center-IPA (number 019/2014 e 009/2015).

During pregnancy (approximately 21 days) and lactation (approximately 21 days), damns were divided into 4 groups: control diet (CD), high-fat diet (HFD), control diet and purple grape juice (PGJCD), and purple grape juice and high-fat diet (PGJHFD). Dams had free access to water and feed according to the diet of the defined group. The pregnant rats had free access to water and diet, according to the group. All groups received water, however the purple grape juice groups received the juice plus. The daily consumption of grape juice was of approximately 72.02 ± 31.94 mL (PGJCD) and 48.51 ± 23.14 mL (PGJHFD). Also during treatment, the gestational weight gain of these animals was monitored 3 times a week with a digital scale balance (Crystal 200, Gibertini, Italy). After lactation, the animals were euthanized by decapitation. Trunk blood was collected which was centrifuged to obtain the serum and stored at about 0 °C. The liver of these animals was also removed, homogenized in 1.5% KCl, and refrigerated at −20 °C until the moment of analysis.

Protein concentration was determined according to the method described by Lowry et al. (1951) [28].

The total phenolic compounds of grapevine Vitis Labrusca L. were quantified by Folin-Ciocalteau and the majority compounds were identified by high-performance chromatography (HPLC) with pure standards of resveratrol, catechin, epicatechin, naringin, gallic acid, chlorogenic acid, and ferulic acid (Table 2).
We monitored weight gain during pregnancy and observed a significant difference in measures eight (p = 0.031), nine (p = 0.006), ten (p < 0.001), and eleven (p < 0.001), corresponding respectively to 16, 18, 24, and 26 days of treatment, where the groups consuming grapes presented lower weight than the control groups, and the PGJCD group had the lowest weight among all the related groups (Figure 1). Also, when evaluating the gestational weight gain (final weight–initial weight), we observed that the beverage factor promoted a reduction in gestational weight gain, where the groups that consumed the juice presented values lower than the control groups (Figure 2).
We observed that the diet was determinant for the alterations in lipidic profile. CT and TG have increased levels, and HDL levels have been reduced in dams who consumed a high fat diet with or without grape juice consumption (Table 3). In order to evaluate hepatic function through AST level, we observed statistically differences in type of drink (water = 266.54 ± 8.670, juice = 234.28 ± 10.50) and with the diet factor (control = 265.69 ± 9.16, high fat diet = 235.12 ± 10.10). The rats from PGJCD and PGJHFD groups showed the lowest levels if comparing with other groups (Table 3). The high fat diet was the factor that caused increases in ALT level (Table 3). As for renal markers, the dams who consumed a high fat diet during the gestation reduced urea level (Table 3), no differences in serum creatinine levels were observed (Table 3).
Regarding lipid peroxidation levels, we observed that the beverage consumption alters this parameter in liver and serum. In serum, the females from grape juice group had lower TBARS levels (2.57 ± 0.44) than the non-consumers (3.69 ± 0.42) (Figure 3A). In hepatic tissue, the lower lipid damages were also observed in rats consumed the grape juice during pregnancy (2.57 ± 0.21) when compared to the non-consumers rats (3.44 ± 0.24) (Figure 3B).
Regarding protein oxidation (carbonyl levels), no significant differences in serum were observed between the treated groups (p > 0.05) (Figure 4A). When evaluated in the liver, we found that mothers who consumed a high fat diet had higher protein damage in the liver (107.29 ± 13.37) than the control group (60.72 ± 11.37) (Figure 4B).
We did not observe difference in the factors interactions (beverages and diets) in plasma thiols (sulfhydryl) levels (p > 0.05) (Figure 5A). On the other hand, dams who consumed grape juice during pregnancy presented increased levels of these groups in the liver (30.39 ± 1.29) when compared to the control groups (21.88 ± 1.43) (Figure 5B). As for antioxidant activity, we observed that grape juice consumption had a lower SOD activity in the liver (22.81 ± 9.07) compared to than the non-grape juice consumers (57.80 ± 9.67) (Table 4). In CAT activity no significant differences were found in the liver among the groups of dams (p > 0.05) (Table 4).

We can observe the importance of maternal nutritional choices. Consumption of grape juice can reduce weight gain during pregnancy, ensuring the health of the mother and the development of her offspring. Also, the juice was effective mainly on serum levels of AST and on lipid peroxidation, reducing these damages in both serum and liver and promoting the increase of non-enzymatic defenses in the liver tissue. These findings, together with those in the literature, reinforce the protective effect of grape juice in relation to OE. In spite of this, more studies are needed to better elucidate and understand the primary and secondary mechanisms that may be involved in this process, including the possible transgenerational effects on the health of offspring in the short and long term.

This research was funded by IBRAVIN and Centro Universitário Metodista IPA. 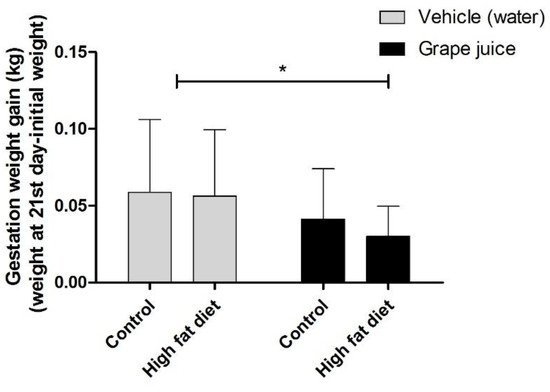 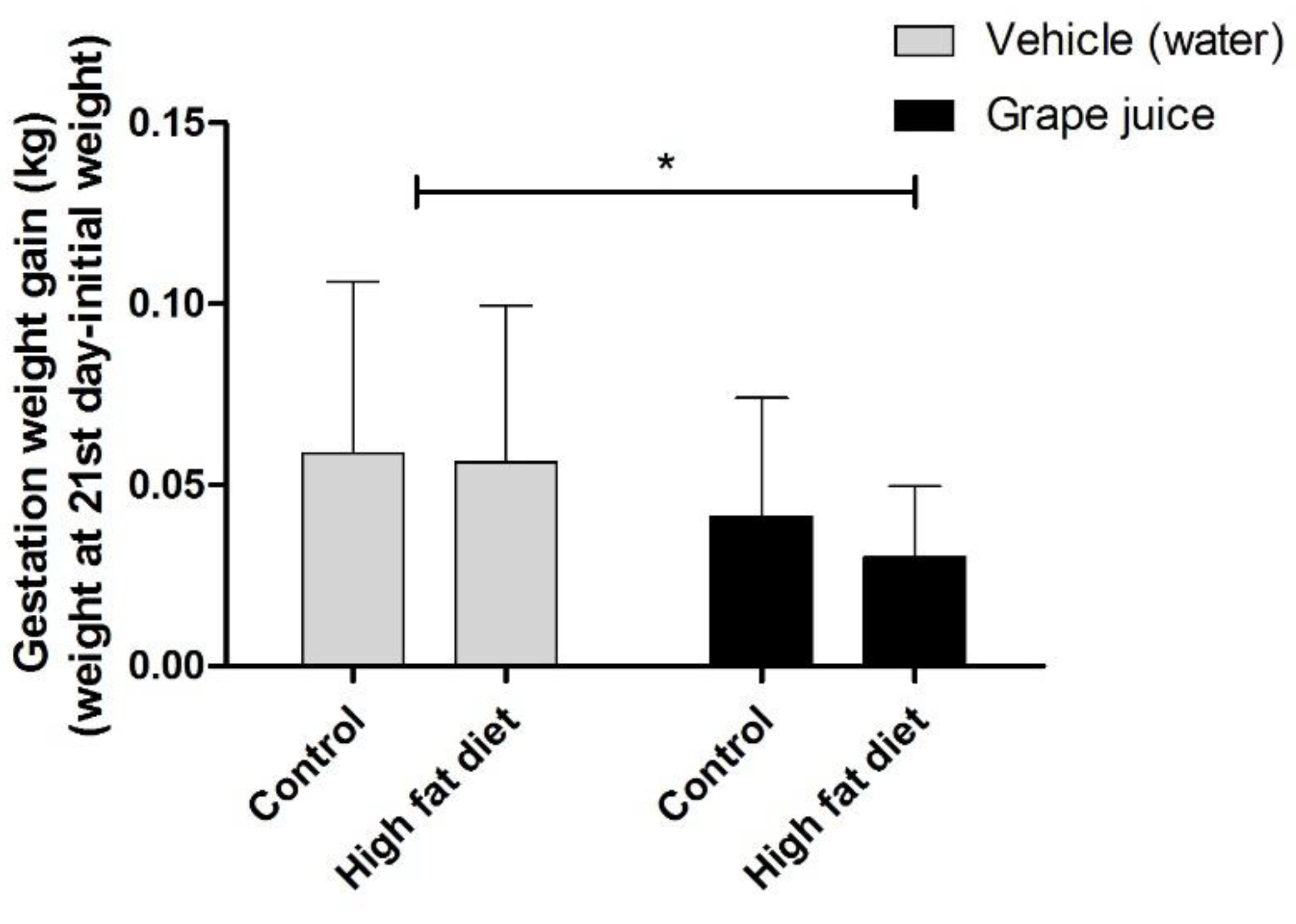 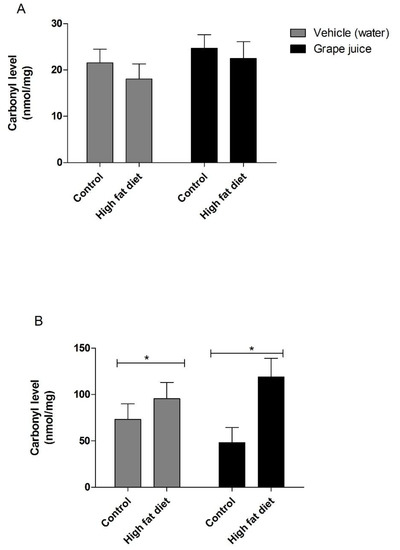 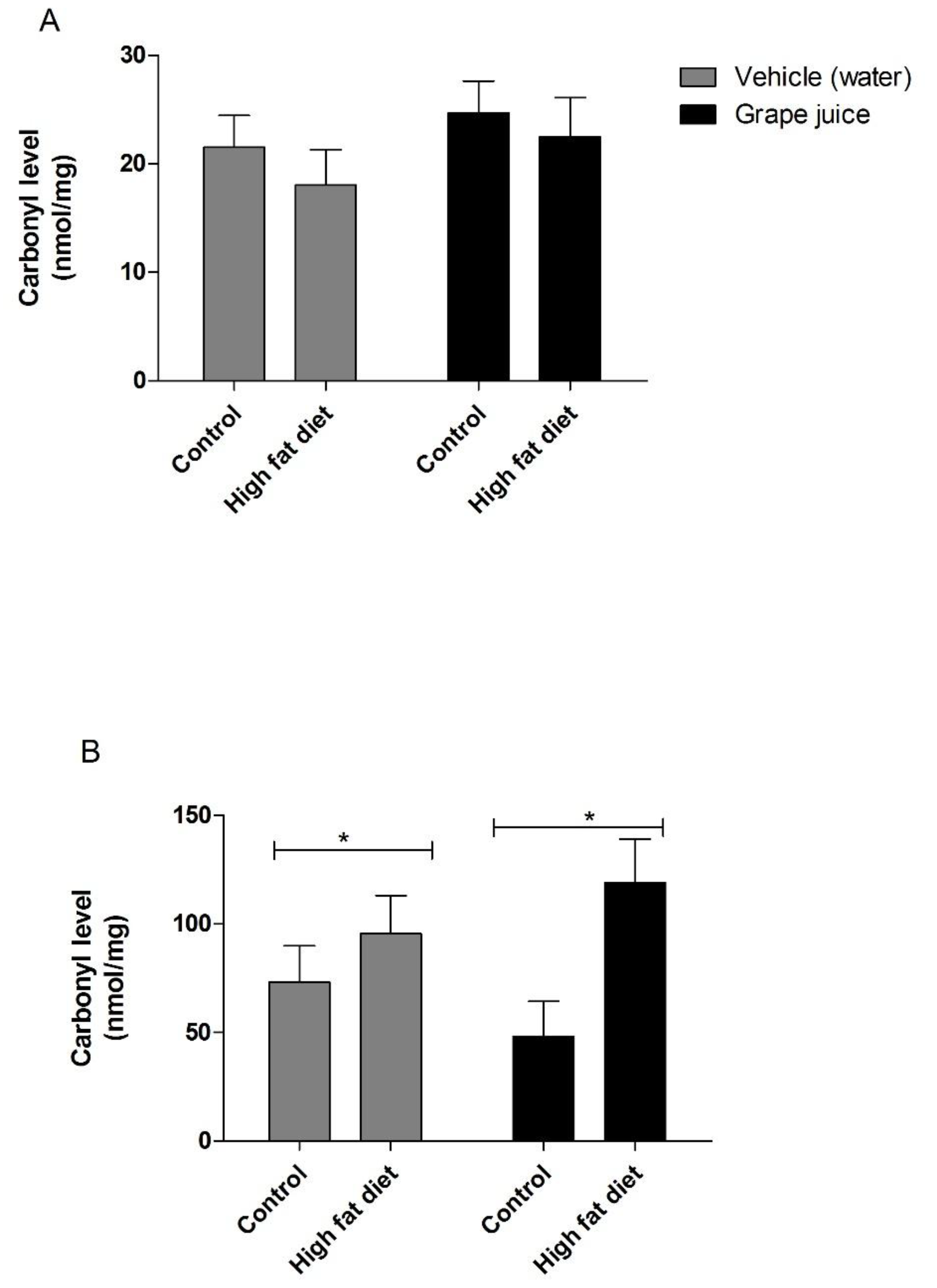 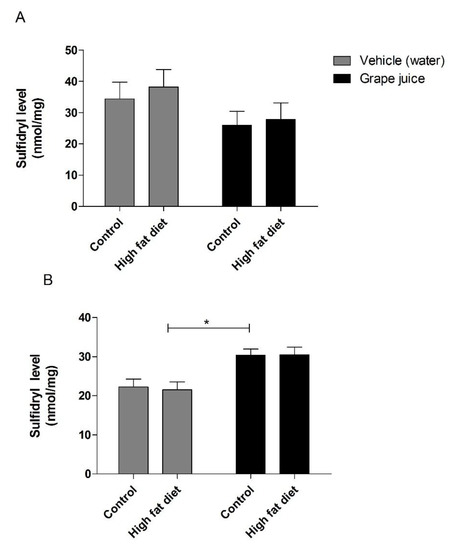