Olfactory ensheathing cells (OECs) are a promising candidate therapy for neuronal tissue repair. However, appropriate priming conditions to drive a regenerative phenotype are yet to be determined. We first assessed the effect of using a human fibroblast feeder layer and fibroblast conditioned media on primary rat olfactory mucosal cells (OMCs). We found that OMCs cultured on fibroblast feeders had greater expression of the key OEC marker p75NTR (25.1 ± 10.7 cells/mm2) compared with OMCs cultured on laminin (4.0 ± 0.8 cells/mm2, p = 0.001). However, the addition of fibroblast-conditioned media (CM) resulted in a significant increase in Thy1.1 (45.9 ± 9.0 cells/mm2 versus 12.5 ± 2.5 cells/mm2 on laminin, p = 0.006), an undesirable cell marker as it is regarded to be a marker of contaminating fibroblasts. A direct comparison between human feeders and GMP cell line Ms3T3 was then undertaken. Ms3T3 cells supported similar p75NTR levels (10.7 ± 5.3 cells/mm2) with significantly reduced Thy1.1 expression (4.8 ± 2.1 cells/mm2). Ms3T3 cells were used as feeder layers for human OECs to determine whether observations made in the rat model were conserved. Examination of the OEC phenotype (S100β expression and neurite outgrowth from NG108-15 cells) revealed that co-culture with fibroblast feeders had a negative effect on human OECs, contrary to observations of rat OECs. CM negatively affected rat and human OECs equally. When the best and worst conditions in terms of supporting S100β expression were used in NG108-15 neuron co-cultures, those with the highest S100β expression resulted in longer and more numerous neurites (22.8 ± 2.4 μm neurite length/neuron for laminin) compared with the lowest S100β expression (17.9 ± 1.1 μm for Ms3T3 feeders with CM). In conclusion, this work revealed that neither dual co-culture nor fibroblast-conditioned media support the regenerative OEC phenotype. In our case, a preliminary rat model was not predictive of human cell responses. View Full-Text
Keywords: olfactory ensheathing cells; spinal cord injury; neural regeneration; cell therapies olfactory ensheathing cells; spinal cord injury; neural regeneration; cell therapies
►▼ Show Figures 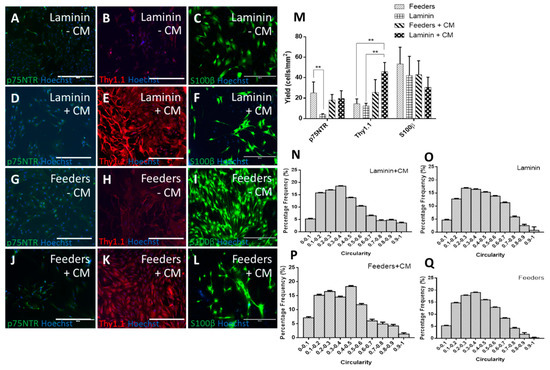