This paper focuses on cytotoxicity examination of superparamagnetic iron oxide nanoparticles (SPIONs) using different methods, including impedance spectroscopy. Recent advances of SPIONs for clinical and research applications have triggered the need to understand their effects in cells. Despite the great advances in adapting various biological and chemical methods to assess in-vitro toxicity of SPIONs, less attention has been paid on the development of a high throughput label-free screening platform to study the interaction between the cells and nanoparticles including SPIONs. In this paper, we have taken the first step toward this goal by proposing a label-free impedimetric method for monitoring living cells treated with SPIONs. We demonstrate the effect of SPIONs on the adhesion, growth, proliferation, and viability of neuroblastoma 2A (N2a) cells using impedance spectroscopy as a label-free method, along with other standard microscopic and cell viability testing methods as control methods. Our results have shown a decreased viability of the cells as the concentration of SPIONs increases with percentages of 59%, 47%, and 40% for 100 µg/mL (C4), 200 µg/mL (C5), 300 µg/mL (C6), respectively. Although all SPIONs concentrations have allowed the growth of cells within 72 h, C4, C5, and C6 showed slower growth compared to the control (C1). The growth and proliferation of N2a cells are faster in the absence or low concentration of SPIONS. The percent coefficient of variation (% CV) was used to compare cell concentrations obtained by TBDE assay and a Scepter cell counter. Results also showed that the lower the SPIONs concentration, the lower the impedance is expected to be in the sensing electrodes without the cells. Meanwhile, the variation of surface area (∆S) was affected by the concentration of SPIONs. It was observed that the double layer capacitance was almost constant because of the higher attachment of cells, the lower surface area coated by SPIONs. In conclusion, impedance changes of electrodes exposed to the mixture of cells and SPIONs offer a wide dynamic range (>1 MΩ using Electric Cell-substrate Impedance electrodes) suitable for cytotoxicity studies. Based on impedance based, viability testing and microscopic methods’ results, SPIONs concentrations higher than 100 ug/mL and 300 ug/mL cause minor and major effects, respectively. We propose that a high throughput impedance-based label-free platform provides great advantages for studying SPIONs in a cell-based context, opening a window of opportunity to design and test the next generation of SPIONs with reduced toxicity for biomedical or medical applications. View Full-Text
Keywords: SPIONs; high-throughput; viability; neuroblastoma 2A; impedance-based assay SPIONs; high-throughput; viability; neuroblastoma 2A; impedance-based assay
►▼ Show Figures 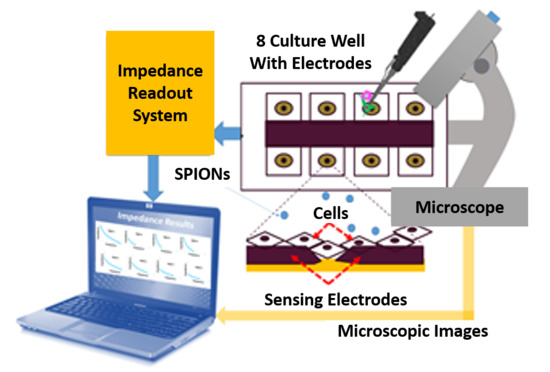