Removal of Heavy Metals from Wastewaters: A Challenge from Current Treatment Methods to Nanotechnology Applications

Soil amendments have been proposed for immobilizing metallic contaminants, thus reducing their uptake by plants. For the safe production of crops in contaminated soil, there is a need to select suitable amendments that can mitigate heavy metal uptake and enhance crop yield. The present experiment compared the effects of three amendments, hydroxyapatite (HAP), organic manure (OM), and biochar (BC), on plant growth and heavy metal accumulation by maize in an acidic soil contaminated with Cd, Pb, and Zn, and their potential for safe crop production. Toxicity characteristic leaching procedure (TCLP) tests, energy dispersive X-ray spectroscopy (EDS) analysis, and X-ray diffraction (XRD) analysis were used to evaluate the effectiveness and mechanisms of heavy metal immobilization by the amendments. The results showed that shoot and root biomass was significantly increased by HAP and 1% OM, with an order of 1% HAP > 0.1% HAP > 1% OM, but not changed by 0.1% OM and BC (0.1% and 1%). HAP significantly decreased Cd, Pb, and Zn concentrations in both shoots and roots, and the effects were more pronounced at the higher doses. OM decreased the shoot Cd and Pb concentrations and root Zn concentrations, but only 1% OM decreased the shoot Zn and root Pb concentrations. BC decreased the shoot Cd and Pb concentrations, but decreased the shoot Zn and root Pb concentrations only at 1%. HAP decreased the translocation factors (TFs) of Cd, Pb, and Zn (except at the 0.1% dose). OM and BC decreased the TFs of Cd and Zn, respectively, at the 1% dose but showed no significant effects in other cases. Overall, plant P, K, Fe, and Cu nutrition was improved by HAP and 1% OM, but not by 0.1 OM and BC. Soil pH was significantly increased by HAP, 1% OM, and 1% BC, following an order of 1% HAP > 1% OM > 0.1% HAP > 1% BC. The TCLP levels for Cd, Pb, and Zn were significantly reduced by HAP, which can be partly attributed to its liming effects and the formation of sparingly soluble Cd-, Pb-, and Zn-P-containing minerals in the HAP-amended soils. To some extent, all the amendments positively influenced plant and soil traits, but HAP was the optimal one for stabilizing heavy metals, reducing heavy metal uptake, and promoting plant growth in the contaminated soil, suggesting its potential for safe crop production. View Full-Text
Keywords: soil remediation; heavy metal immobilization; soil pollution; food safety soil remediation; heavy metal immobilization; soil pollution; food safety
►▼ Show Figures 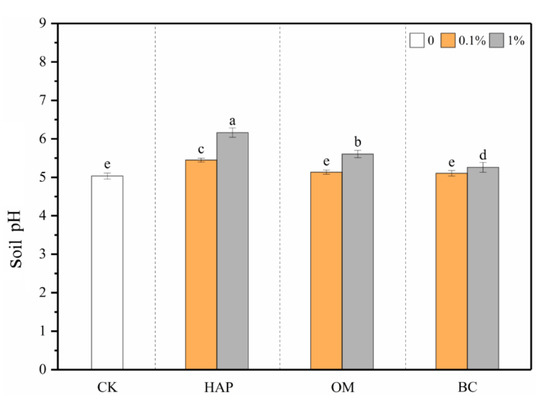