Effect of 10 UV Filters on the Brine Shrimp Artemia salina and the Marine Microalga Tetraselmis sp.

The presence of pharmaceutical and personal care product (PPCP) residues in the aquatic environment is an emerging issue due to their uncontrolled release through gray water, and accumulation in the environment that may affect living organisms, ecosystems and public health. The aim of this study is to assess the toxicity of benzophenone-3 (BP-3), bis-ethylhexyloxyphenol methoxyphenyl triazine (BEMT), butyl methoxydibenzoylmethane (BM), methylene bis-benzotriazolyl tetramethylbutylphenol (MBBT), 2-ethylhexyl salicylate (ES), diethylaminohydroxybenzoyl hexyl benzoate (DHHB), diethylhexyl butamido triazone (DBT), ethylhexyl triazone (ET), homosalate (HS) and octocrylene (OC) on marine organisms from two major trophic levels, including autotrophs (Tetraselmis sp.) and heterotrophs (Artemia salina). In general, results showed that both HS and OC were the most toxic UV filters for our tested species, followed by a significant effect of BM on Artemia salina due to BM—but only at high concentrations (1 mg/L). ES, BP3 and DHHB affected the metabolic activity of the microalgae at 100 µg/L. BEMT, DBT, ET, MBBT had no effect on the tested organisms, even at high concentrations (2 mg/L). OC toxicity represents a risk for those species, since concentrations used in this study are 15–90 times greater than those reported in occurrence studies for aquatic environments. For the first time in the literature, we report HS toxicity on a microalgae species at concentrations complementing those found in aquatic environments. These preliminary results could represent a risk in the future if concentrations of OC and HS continue to increase. View Full-Text
Keywords: UV-filters; toxicity tests; marine microalgae; Artemia salina; marine environment UV-filters; toxicity tests; marine microalgae; Artemia salina; marine environment
►▼ Show Figures 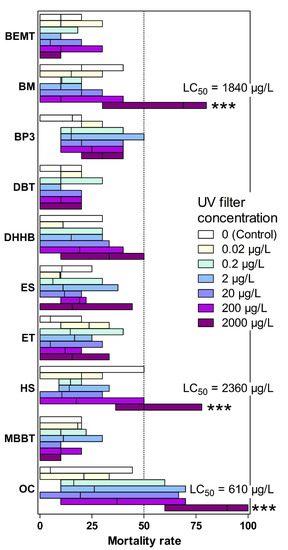