Effects of Exposure to Tobacco Cigarette, Electronic Cigarette and Heated Tobacco Product on Adipocyte Survival and Differentiation In Vitro
Previous Article in Journal

Beginning in June of 2019, there was a marked increase in reported cases of serious pulmonary injury associated with vaping. The condition, referred to as e-cigarette or vaping product use-associated lung injury (EVALI), does not appear to involve an infectious agent; rather, a chemical adulterant or contaminant in vaping fluids is suspected. In August of 2019, the Wadsworth Center began receiving vaporizer cartridges recovered from patients with EVALI for analysis. Having no a priori information of what might be in the cartridges, we employed untargeted analyses using gas chromatography-mass spectrometry and high-resolution mass spectrometry to identify components of concern. Additionally, we employed targeted analyses used for New York medical marijuana products. Here, we report on the analyses of 38 samples from the first 10 New York cases of EVALI for which we obtained cartridges. The illicit fluids had relatively low cannabinoid content, sometimes with unusual Δ9-/Δ8-tetrahydrocannabinol ratios, sometimes containing pesticides and many containing diluents. A notable diluent was α-tocopheryl acetate (vitamin E acetate; VEA), which was found in 64% of the cannabinoid-containing fluids. To investigate potential sources of the VEA, we analyzed six commercial cannabis-oil diluents/thickeners. Three were found to be >95% VEA, two were found to be primarily squalane, and one was primarily α-bisabolol. The cause(s) of EVALI is unknown. VEA and squalane are components of some personal care products; however, there is growing concern that vaping large amounts of these compounds is not safe. View Full-Text
Keywords: electronic cigarettes; vaping cartridges; cannabinoids; vitamin E acetate electronic cigarettes; vaping cartridges; cannabinoids; vitamin E acetate
►▼ Show Figures 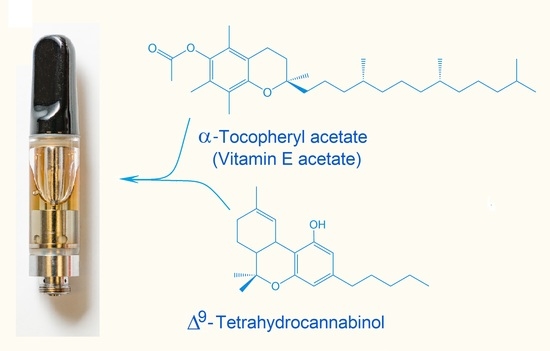