New Insights into the Toxicokinetics of 3,4-Dichloroaniline in Early Life Stages of Zebrafish (Danio rerio)
Previous Article in Journal

To enhance crop productivity and economic profit, farmers often use pesticides that modulate plant growth and prevent disease. However, contamination of ecosystems with agricultural pesticides may impair the health of resident biota. Paclobutrazol (PBZ), an aromatic-containing triazole, is widely applied to many crops in order to promote flowering and fruit setting, while also regulating plant growth and preventing fungus-related diseases. Due to its high mobility, high stability and potential for bioaccumulation, the risks of PBZ to the health of organisms and ecological systems have become a serious concern. In previous studies, we documented the toxicity of PBZ on developing heart, eyes, liver, pancreas and intestine of zebrafish. In this study, we sought to further understand the developmental stage-specific impacts of PBZ on digestive organs and other tissues. Zebrafish were exposed to PBZ beginning at different embryonic stages, and the toxic effects on organs were evaluated at 120 hpf (hours post-fertilization) by in situ hybridization staining with tissue-specific marker genes, such as liver, intestine and pancreas. Unsurprisingly, early-stage embryos exhibited higher sensitivity to PBZ-induced death and developmental hypoplasia of digestive organs. Interestingly, the developing liver and pancreas were more sensitive to PBZ than intestine when embryos were exposed at early stages, but these tissues showed lower sensitivity at later stages. Our delineation of the differential toxic effects of PBZ on developing organs at different exposure timings can serve as a powerful reference for further studies into the mechanisms of PBZ organ toxicity. View Full-Text
Keywords: Paclobutrazol; toxicity; Zebrafish; exposure timing Paclobutrazol; toxicity; Zebrafish; exposure timing
►▼ Show Figures 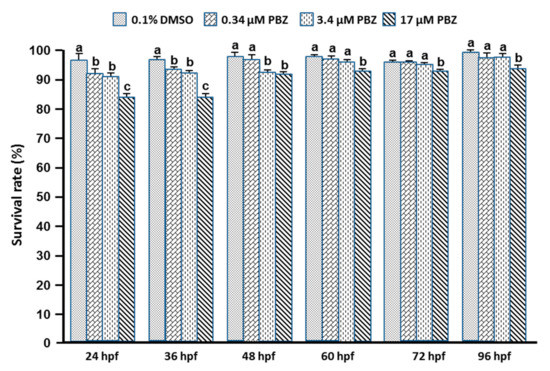