Radiocarbon Tracers in Toxicology and Medicine: Recent Advances in Technology and Science

Piper aduncum, commonly known as matico, is a plant that grows in the mountainous and coastal regions of Peru, and is studied for its antimicrobial properties and various ethnopharmacological uses. The main objective of this study was to determine the cytoprotective and antioxidant effects of the methanolic extract of Piper aduncum leaves in Mus musculus previously administered with sodium fluoride (NaF) using the Micronucleus test and the Comet assay. The extract was administrated orally in four different concentrations: 150, 300, 600, and 1200 mg/Kg for ten days. At the 11th day, a single dose of NaF was administrated via intraperitoneal at 20 mg/Kg. The genotoxicity study was performed with mice from the strain BALB/c, using the Micronucleus test on bone marrow and the Comet assay on peripheral blood according to OECD guidelines 474 and 489, respectively. The statistical analysis was performed by median analysis with ANOVA. Significant differences were found in Micronucleus frequency between the highest concentrations of Piper aduncum and NaF. The Comet assay showed significant reduction of NaF-induced damage on erythrocytes depending on the different concentrations of the extract which were evaluated in this study. It is concluded that the methanolic extract of P. aduncum leaves has cytoprotective and antioxidant activity against sodium fluoride. View Full-Text
Keywords: Piper aduncum; antioxidant; cytoprotective; micronucleus test; Comet assay Piper aduncum; antioxidant; cytoprotective; micronucleus test; Comet assay
►▼ Show Figures 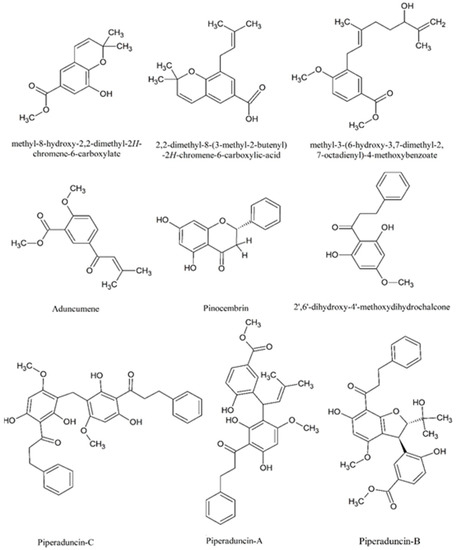