A large species diversity characterises the wide distribution of chestnuts in Asia, North America, and Europe, hence reflecting not only the adaptation of the genus Castanea to diverse environmental conditions, but also to different management strategies encompassing orchards. The characterisation and description of chestnut populations and cultivars are crucial to develop effective conservation strategies of one of the most important Italian and European fruit and wood species. Chestnut cultivars grown in the same pedoclimatic conditions and on the same clonal rootstock were characterised with sensory, spectrophotometric, and chromatographic analysis to determine the phytochemical composition and nutraceutical properties. A multivariate approach, including principal component analysis and conditional inference tree models, was also performed. The ease of peeling, seed colour, and intensity of sweetness were the sensory descriptors that allowed us to differentiate C. sativa cultivars. Antioxidant capacity ranged from 9.30 ± 0.39 mmol Fe+2 kg−1 DW (‘Bouche de Bètizac’) to 19.96 ± 1.89 mmol Fe+2 kg−1 DW (‘Garrone Rosso’). Monoterpenes represented the main component, reaching 88% for hybrids, followed by polyphenols (10–25% for hybrids and chestnuts, respectively). A multivariate approach showed that phenolic acids and tannins were the bioactive classes with the highest discriminating power among different genotypes, and that genotype is a significant variable (p < 0.05). In addition, most of the analysed chestnut cultivars showed a content of bioactive compounds similar to or higher than the main hazelnut, walnut, and almond varieties. Chestnut agrobiodiversity could be intended as strictly associated to the genotype effect and underlines the large variability within the genus Castanea, and therefore, the importance of in farm and ex situ conservation of local germplasm is part of a global strategy aimed at increasing the levels of agrobiodiversity. View Full-Text
Keywords: chestnut; characterisation tool; bioactive compounds; sensory analysis; multivariate approach chestnut; characterisation tool; bioactive compounds; sensory analysis; multivariate approach
►▼ Show Figures 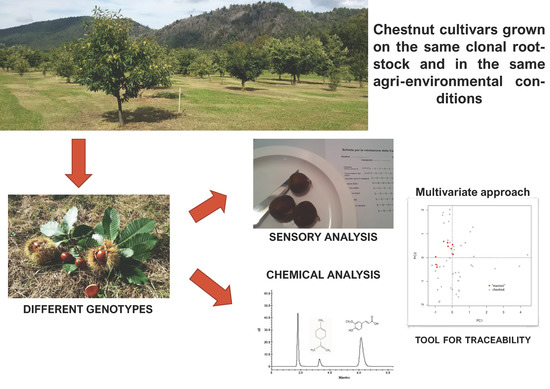