Legumes are a rich source of a wide range of compounds that may represent an important tool to overcome gut dysbiosis. In this work, the prebiotic potential of two cooked legumes (cowpea and black bean) was investigated in comparison with potato:beef mixture, as substrates in batch faecal culture fermentation. Prior to the fermentation, all the samples were in vitro digested, passing through three phases, namely mouth, gastric and small intestine simulation, and then in vitro fermented for 6, 24 and 48 h. The shift of pH, production of gas and short-chain fatty acids (SCFAs) and changes in gut microbiota were evaluated along the fermentation time. The pH decreased significantly over time in all media with fermentable sources when compared with the negative control. Gas production was higher in the media containing fermentable source than in the negative control and decreased with fermentation time. The concentration of SCFAs increased over time and it was significantly higher for both legumes than in inulin (positive control) and potato:beef meal. Acetate was the major SCFAs produced during fermentation, particularly in media containing legumes. Both legumes presented a strong prebiotic effect on gut microbiota, showing a significant increase in Bifidobacterium and Lactobacillus. These results suggest that consumption of cooked cowpea and black bean, used alone or as an ingredient of novel functional foods, may contribute to improving intestinal health and therefore human health promotion. View Full-Text
Keywords: cowpea; black bean; in vitro digestion; in vitro fermentation; prebiotic effect; short-chain fatty acids cowpea; black bean; in vitro digestion; in vitro fermentation; prebiotic effect; short-chain fatty acids
►▼ Show Figures 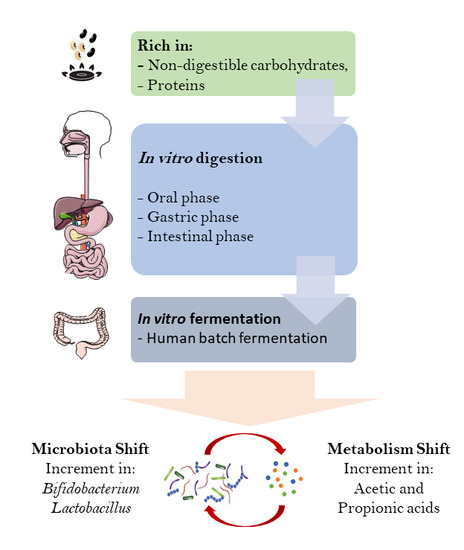