Quality and Safety of Meat Products
Next Article in Special Issue

Malolactic fermentation (MLF) is an important process in wine production due to the resulting reduction in acidity. MLF is typically induced by the addition of Oenococcus oeni after the completion of alcoholic fermentation (AF), but can occur concurrent with AF by co-inoculation of O. oeni with Saccharomyces cerevisiae. This study investigated the effect of MLF inoculation timing and temperature (15 °C and 21 °C) and the presence of the non-Saccharomyces yeast Torulaspora delbrueckii on Chardonnay wine aroma and mouthfeel. Aroma composition was measured using headspace solid-phase microextraction-gas chromatography mass spectrometry (HS-SPME-GCMS). Mouthfeel attributes of the wines produced were assessed by a winemaker panel, using Napping® and Ultra-flash profiling. Significant differences in aroma composition and mouthfeel perception were found based on MLF timing and inoculation conditions, as well as between temperatures. Temperature had a greater impact on the aroma composition for sequential inoculations, while there were little differences based on the temperature of concurrent fermentations. Treatment type and temperature also affected the chemical composition of finished wines. Mouthfeel was impacted, although not as strongly as aroma composition. These findings demonstrate the usefulness of various MLF practices to influence the sensory qualities of a Chardonnay wine. View Full-Text
Keywords: Saccharomyces cerevisiae; Oenococcus oeni; Torulaspora delbrueckii; concurrent fermentation; GCMS; Napping®; ultra-flash profiling Saccharomyces cerevisiae; Oenococcus oeni; Torulaspora delbrueckii; concurrent fermentation; GCMS; Napping®; ultra-flash profiling
►▼ Show Figures 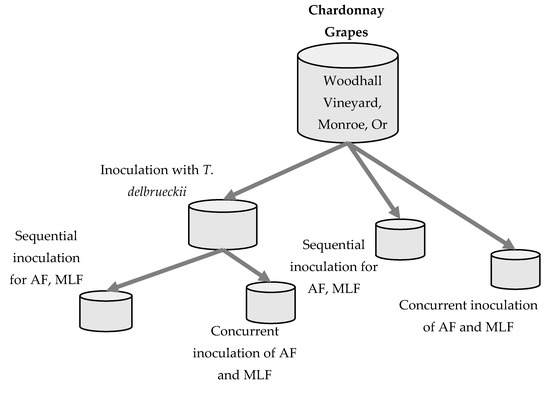 
Sereni, Anthony, Quynh Phan, James Osborne, and Elizabeth Tomasino. 2020. "Impact of the Timing and Temperature of Malolactic Fermentation on the Aroma Composition and Mouthfeel Properties of Chardonnay Wine" Foods 9, no. 6: 802. https://doi.org/10.3390/foods9060802