Interaction between Myricetin Aggregates and Lipase under Simplified Intestinal Conditions

Cirsium setidens Nakai, a perennial plant belonging to the genus Cirsium, is an endemic species of Korea and mainly grows in Kangwon province [1]. It is commonly called “Gondre” in Korea and is extensively used as food and mainly harvested in May, although young leaves and stems of the plant are also consumed in spring. The plant is used in a variety of cooking methods, such as in preparing vegetables, soups, and in fried, stir-fried, and blanched food items [2]. It is also used to prepare tea due to its unique flavor [3].
C. setidens Nakai has received increasing attention as a functional food [2]. The Cirsium genus, belonging to the Compositae family, contains various bioactive phytochemicals that have various physiological functions, such as antioxidant, anti-cancer, anti-tumor, and anti-inflammatory effects [1,4,5,6]. Pectolinarin, a flavone, is commonly found in plants belonging to the genus Cirsium. Pectolinarin and pectolinarigenin, the aglycon of pectolinarin, have hepato-protective and anti-inflammatory activities [7,8]. Silymarin, a polyphenol flavonoid derived from milk thistle, is also present in large amounts in C. setidens Nakai. Silymarin is a powerful antioxidant and has various therapeutic properties such as free radical-scavenging, reactive oxygen species-scavenging, and anti-cancer activity [9,10]. C. setidens Nakai also contains polyphenols, including pectolinarin and silimarin, in addition to dietary fibers, minerals, and vitamins. Its wide range of physiological activities, due to the presence of a large number of phytochemicals, has been well-studied [3,4].
Recently, the production and consumption of processed food products prepared using C. setidens Nakai, such as steamed rice with Gondre, have been steadily increasing due to the unique flavor. However, very little information is available on the volatile compounds from C. setidens Nakai, which give the plant its characteristic flavor and taste. Moreover, to the best of our knowledge, only one study has analyzed the volatile compounds in the essential oil extracted from C. setidens Nakai via hydrodistillation [11]. To develop food products that can retain the characteristics of C. setidens Nakai, further research is required to assess the effect of the processing methods on the taste and flavor of processed food products of C. setidens Nakai.
Over the past several decades, numerous studies have been conducted to determine the volatile compounds in food products or their raw materials. The volatile extraction methods such as simultaneous distillation extraction (SDE), solvent-assisted flavor evaporation (SAFE), and steam distillation under reduced pressure (DRP-LLE), which have been used traditionally, have several disadvantages, such as the need for large quantities of extraction solvents and post-extraction solvent evaporation [11,12,13,14,15]. Therefore, headspace extraction methods, such as dynamic headspace, headspace solid-phase microextraction (HS-SPME), and headspace stir bar sorptive extraction (HS-SBSE), are being widely used [15,16,17,18,19,20,21]. The advantages associated with headspace techniques include a simple procedure that avoids the use of organic solvents and high selectivity due to the use of more suitable sorbents, such as polydimethylsiloxane (PDMS), carboxen, divinylbenzene (DVB), and polyacrylate (PA).
Recently, the use of an SPME Arrow device, a novel technology that combines the advantages of SPME and HSSE, was introduced for the microextractions of larger volumes of sorbent material compared with that with a traditional SPME fiber [22,23]. This device, consisting of an inner metal rod coated with sorbent materials protected by an outer metal tube, is more robust than the traditional SPME fibers. A scheme of the SPME Arrow device is shown in Figure 1.
SPME Arrows are also covered with a larger volume (6–20 times) of the sorbent phases than SPME fibers, indicating a higher sample capacity [23,24,25]. Therefore, SPME Arrow extracts are more efficient and have better reproducibility than SPME fibers and allow for more volatile compounds to be extracted and analyzed in food [23,24,25]. Since the development of the SPME Arrow, studies on the analysis of harmful components, such as polycyclic aromatic hydrocarbons in water and volatile amines in wastewater, have been carried out [26,27]. However, little research has been reported on the analysis of volatile compounds using SPME Arrows, particularly from food materials. In addition, there is virtually no report on the analysis of volatile compounds from C. setidens Nakai using the SPME Arrow system.
In the present study, the volatile compounds of C. setidens Nakai were analyzed using four different types of SPME Arrows and compared to determine the most suitable SPME Arrow for the further analysis of C. setidens Nakai. We found that the SPME Arrow with a carbon wide range (CWR)/PDMS coating exhibited the highest affinity towards the volatile compounds from the plant. A total of 58 volatile compounds were extracted and identified using gas chromatography–mass spectrometry, amongst which 2-Pentylfuran was found in the highest concentration. Based on our results, we demonstrate that a CWR/PDMS film-coated SPME Arrow is most suitable for the analysis of volatile compounds from Cirsium setidens Nakai.

The HS-SPME Arrow was carried out using an RSH Triplus autosampler (Thermo Fisher Scientific Inc., Brookfield, WI, USA). Four different sorbent-coated SPME Arrows were used, and each Arrow was conditioned prior to analysis according to the instructions provided by the manufacturer. For the extraction of volatile components, 1 g of freeze-dried and ground C. setidens Nakai samples was placed in 20-mL headspace screw-top vials sealed with PTFE/silicone septum containing caps. The vials were heated and stirred at 50 °C for 10 min to equilibrate the headspace with the volatile compounds in the samples. The Arrows were then exposed to the headspace for 30 min. The volatile compounds in the samples were adsorbed to the sorbent of the respective SPME Arrows, which were then inserted into the injection port in GC and desorbed for 5 min at 250 °C. After desorption, the SPME Arrows were subjected to post-conditioning for 5 min.

All samples were separated and detected using a TRACE™ 1310 Gas Chromatograph-TSQ 9000 TriPlus quadrupole mass spectrometer (Thermo Fisher Scientific Inc., USA) equipped with a DB-WAX capillary column (60 m × 0.25 mm i.d. × 0.25 μm film thickness) purchased from J & W Scientific Inc., Folsom, CA, USA. The volatile compounds injected into the inlet were delivered to the column at a split ratio of 1:5. Helium was used as a carrier gas with a flow rate of 1 mL/min in a constant flow mode. The GC oven was programed as follows: the initial temperature of 40 °C was maintained for 10 min and then increased to 50 °C at a rate of 2 °C min−1. Subsequently, the temperature was further increased from 50 to 100 °C at a rate of 3 °C min−1 and then to a final temperature of 210 °C at a rate of 4 °C min−1. It was maintained at the final temperature for 5 min. The mass spectrometer was allowed to scan the range from 30 to 500 m/z in full scan mode. Electron ionization was conducted at 70 eV of ionization energy. The data obtained were processed using Xcalibur. The volatile compounds were identified in two ways that are widely used for profiling volatile compounds. The mass spectra obtained from the GC-MS experiments were compared with the standard spectral data in the Wiley/NIST 2008 library. The Kovats retention index (KI) was calculated using the retention time of the standard n-alkanes and also used for the identification of the peaks. KI was compared with the values in the previously reported literature that can be found in the NIST library, for qualitative analysis. The efficiencies of the four different SPME Arrows were evaluated by comparing the peak areas of each of the volatile components extracted. All experiments were performed in triplicate and expressed as the mean value ± standard deviation.

The chromatograms of the volatile compounds of C. setidens Nakai analyzed using the four types of SPME Arrows are shown in Figure 4. Volatile compounds such as 2-Pentylfuran, 2-Ethylfuran, 1-Methylcyloheptanol, 1-Penten-3-ol, 2,2,4,6,6-Pentamethylheptane, 2,3,6,7-Tetramethyloctane, 5-Ethyl-2,2,3-trimethylheptane, 3,5-Octadien-2-one, β-Cyclocitral, and trans-β-Ionone were mainly observed. Other volatile compounds such as caryophyllene, trans-β-Ionone (also named as 4-(2,6,6-Trimethyl-1-cyclohexen-1-yl)-3-buten-2-one), and β-Ionone epoxide were previously reported in the essential oils extracted from C. setidens Nakai [11]. Volatile compounds belonging to the alcohol group were present in large amounts based on the peak areas (from 327.16 × 106 to 2200.41 × 106 area units) in the extractions performed from all four types of SPME Arrows. In addition, aliphatic hydrocarbons, especially 2,2,4,6,6-pentamethylheptane, were the most abundant volatile compounds extracted by all four SPME Arrows, except the PA-coated Arrow. Further, 1-Methylcycloheptanol, 1-Penten-3-ol, and trans-β-Ionone were also present in high amounts based on the peak area in the extractions from all four Arrows. Among those compounds, 1-Penten-3-ol is known to smell like green vegetables [28] and trans-β-ionone represents a violet-like, sweet, and floral scent [29,30]. In particular, volatiles extracted with CWR/PDMS-coated SPME Arrows showed a particularly high amount of 2-pentylfuran, which is formed from linoleic acid and is well-known for its involvement in lipid oxidation. It is reported to smell like earthy beany vegetables and is expected to undergo changes in content upon drying and storage depending upon storage conditions, which can eventually change the flavor [31,32]. Moreover, 3,5-Octadien-2-one, which imparts a mushroom-like flavor, was also present in high amounts [33]. β-Cyclocitral was present in high amounts based on the peak area in the extractions performed by all SPME Arrows except that with a PDMS coating. β-Cyclocitral is one of the monoterpenoids derived from carotenoids. It is an important compound, commonly found in many plants, vegetables, and fruits, has a sweet smell, and imparts a distinct fruity flavor [33]. The presence of the volatile compounds that belong to the group of terpenes are consistent with previous reports by Choi that demonstrated the presence of these compounds in essential oils obtained from C. setidens [11]. 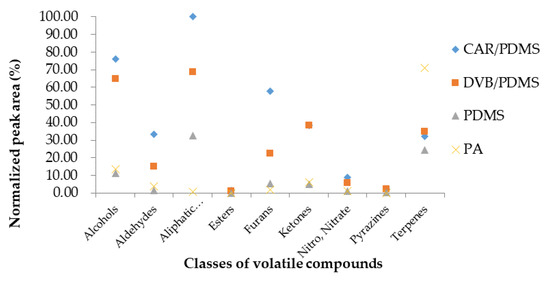 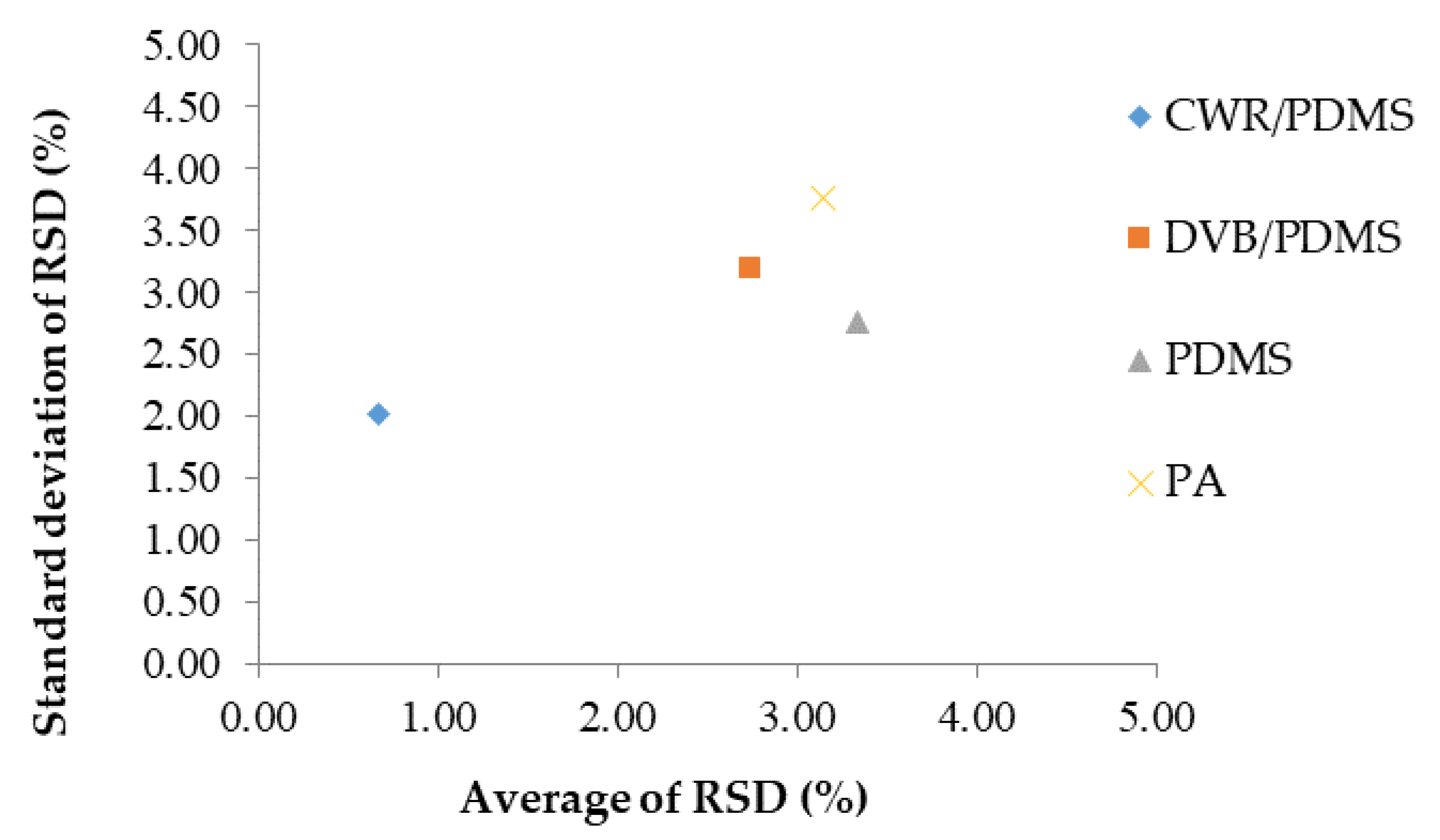