Animal-Origin Prebiotics Based on Chitin: An Alternative for the Future? A Critical Review
Next Article in Special Issue

Effects of Sugars and Sugar Alcohols on the Gelatinization Temperatures of Wheat, Potato, and Corn Starches

In this study, three pearling fractions, namely bran, dehulled grains and pearled grains, derived from fourteen hulled and one hull-less Greek barley cultivars (Hordeum vulgare L.), were analyzed for the protein, ash, β-glucan, phenolic compounds and tocols contents. High variations appeared in the bioactive contents across the barley cultivars and fractions as well. The protein and ash contents decreased from the outer to the inner layers, whereas β-glucans presented an inverse trend. The highest protein and β-glucan contents were in the hull-less cultivar; however, one hulled cultivar (Sirios) exhibited similar β-glucan content, while another (Constantinos) had even higher protein content. The results also revealed that functional compounds were mainly located in bran fraction. Similar trends were also noted for the antioxidant activity. Ferulic acid was the primary phenolic acid in all fractions, followed by sinapic and p-coumaric acids that were dominant in bound form. However, oligomeric flavonoids, such as prodelphinidin B3, catechin, and procyanidin B2, were more abundant in free form. Overall, this study highlights that different barley cultivars can provide pearling flour fractions of varying composition (nutrients and bioactives), which have the potential to serve as nutritionally valuable ingredients in formulations of cereal-based functional food products. View Full-Text
Keywords: barley cultivars; pearling fractions; β-glucan; protein; tocols; phenolics; proanthocyanidins; antioxidant activity barley cultivars; pearling fractions; β-glucan; protein; tocols; phenolics; proanthocyanidins; antioxidant activity
►▼ Show Figures 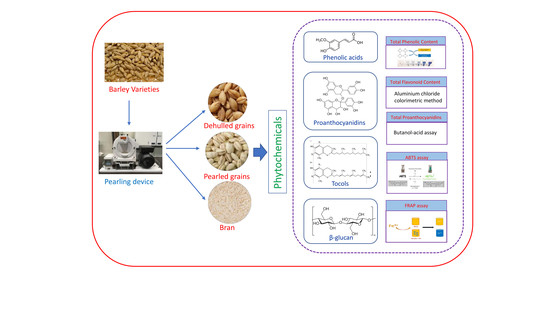