Poultry meat deterioration is caused by environmental conditions, as well as proliferation of different bacterial groups, and their interactions. It has been proposed that meat spoilage involves two bacterial groups: one group that initiates the deterioration process, known as specific spoilage organisms (SSOs), and the other known as spoilage associated organisms (SAOs) which represents all bacteria groups recovered from meat samples before, during, and after the spoilage process. Numerous studies have characterized the diversity of chicken meat SAOs; nonetheless, the identification of the SSOs remains a long-standing question. Based on recent genomic studies, it is suggested that the SSOs should possess an extensive genome size to survive and proliferate in raw meat, a cold, complex, and hostile environment. To evaluate this hypothesis, we performed comparative genomic analyses in members of the meat microbiota to identify microorganisms with extensive genome size and ability to cause chicken meat spoilage. Our studies show that members of the Pseudomonadaceae family have evolved numerous biological features such as large genomic size, slow-growing potential, low 16S rRNA copy number, psychrotrophic, and oligotrophic metabolism to initiate the spoilage of poultry meat. Moreover, inoculation experiments corroborated that these biological traits are associated with the potential to cause chicken meat deterioration. Together, these results provide new insights into the identification of SSO. Further studies are in progress to elucidate the impact of the SSO on meat quality and microbiota diversity. View Full-Text
Keywords: meat spoilage; Pseudomonadaceae; genomic; specific spoilage organisms; chicken meat spoilage; Pseudomonadaceae; genomic; specific spoilage organisms; chicken
►▼ Show Figures 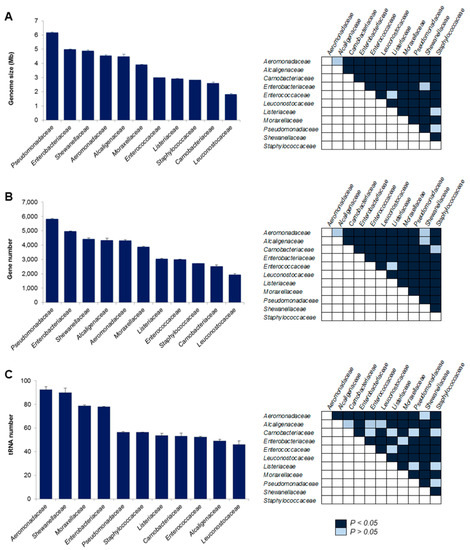