The drivers of consumer acceptance concerning organic wines are not well understood. In particular, among wine professionals, there are anecdotal evidences claiming that consumers accept off-flavours that would not be tolerated if the wines were conventionally produced. Therefore, the aim of this study was to shed further light on this issue by tasting blind wines of both types of production using a tasting panel comprised by experienced individuals of several nationalities. The tasted wines were both conventional and organic and were with and without off-flavours. The same wines were evaluated in three tasting sessions where the given information was: (1) all wines were conventional, (2) all wines were organic, and (3) tasters were asked to guess the mode of production. A group of untrained tasters also rated the same organic wines in an informed session. The results showed that wines were significantly better scored and were given a higher willingness to pay value in the “organic” session. In addition, the experienced tasting panel produced a list of the most frequent sensory descriptors. When tasters were asked to guess the mode of production, wines that were supposed to be organic received a higher citation of off-flavours, such as “oxidized”, “reductive”, and “animal/undergrowth”. Moreover, an overall emotional response of unpleasantness was associated with the recognition of organic wines in the “guess” session. Untrained tasters rated the same organic wines with lower liking scores and were willing to pay less. In conclusion, off-flavours and their unpleasantness worked as a cue to identify wines supposed to be organic by experienced tasters. Their corresponding higher valorization could be explained by the psychological halo effect induced by the organic label. Contrarily, consumers did not show this halo effect, depreciating wines with unpleasant flavours irrespective of their mode of production. View Full-Text
Keywords: organic wines; liking; willingness to pay; off-flavours; halo effect organic wines; liking; willingness to pay; off-flavours; halo effect
►▼ Show Figures 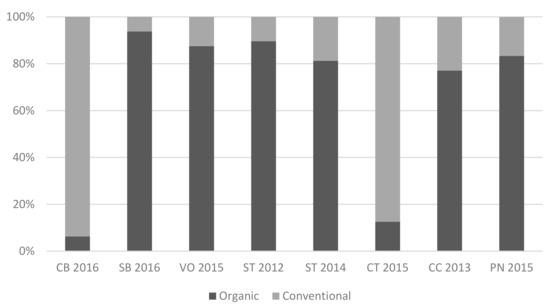