Total, Neutral, and Polar Lipids of Brewing Ingredients, By-Products and Beer: Evaluation of Antithrombotic Activities
Next Article in Special Issue

Obesity is defined as excessive weight gain, particularly inordinate fat accumulation in the body [1]. Due to rapid economic growth and westernized diets, the number of patients with obesity has increased [2], resulting in increased rates of diseases such as type 2 diabetes [3], hypertension [4], hypercholesterolemia [5], and hyperlipidemia [6].
Obesity occurs because of a combination of overeating, lack of exercise, and neurotransmitters, drugs, and genetic factors [7]. To improve obesity, pharmacological treatment has been applied. However, because these treatments involve diverse side effects such as diarrhea and vomiting, the development of anti-obesity materials from natural products with few side effects is required [8,9].
Nelumbo nucifera L contains several flavonoids and alkaloids and has recently been used as a plain or blended tea to treat obesity in China [10]. Morus alba L is abundant in polyphenols such as rutin and quercetin and has been used to treat dyslipidemia, diabetes, fatty liver disease, and hypertension [11]. Raphanus sativus is an annual herb belonging to the cruciferous family and has been reported to be effective for treating hyperlipidemia by decreasing blood sugar level [12]. Some researchers evaluated the anti-obesity effects of Eriobotrya japonica and N. nucifera in adipocytes and obese mice using a single material or mixture, but few studies have examined mixtures of three natural materials [13]. Because each material has a different physiological activity, it is necessary to confirm the physiological activities of each according to the type and mixing ratio. These materials may exert synergistic effects, but there might be also negative effects [14,15].
In this study, we blended N. nucifera L., M. alba L., and R. sativus in different mixing ratios and selected the optimal mixed material based on antioxidant and anti-adipogenic experiments. The anti-obesity effects of optimal mixed material were evaluated in 3T3-L1 adipocytes and C57BL/6J obese mice.

3T3-L1 preadipocytes were plated into 96-well plates (1 × 106 cells/well) and differentiated with MDI medium along with 100 μg/mL extracts since the 2 day after confluence for 6 days. At the day 6, Mixed XTT (2,3-bis(2-methoxy-4-nitro-5- sulfophenyl)-2H-tetrazolium-5-carboxanilide) and PMS (N-methyl dibenzopyrazine methyl sulfate reagents) (WelGene, Seoul, Korea) were included into the medium and incubated for 4 h at 37 °C. Then the soluble formazan salt generated in the medium was measured at 450 nm against 690 nm using a microplate reader [20].

The amount of lipid accumulation of 3T3-L1 cells differentiated on a 24-well plate for 6 days was determined using Oil-Red O staining. In brief, the cells were washed with phosphate-buffered saline (PBS; Gibco) and fixed in 10% formaldehyde in distilled water for 1 h. Next, the cells were dried with 60% isopropanol and stained with Oil-Red O (Sigma-Aldrich) solution for 1 h, and then washed with distilled water. The stained lipids were eluted with 100% isopropanol and measured using a microplate reader at 490 nm.

After administering the anti-obesity candidate materials for 8 weeks, mice were fasted for 12 h and the blood glucose level was measured at 0, 15, 30, 45, 60, and 75 min after glucose (1 g/kg) peritoneal administration. Blood for glucose measurement was obtained from the tail vein of mice and measured using a serum analyzer (Accutrend plus GCTL Cobas Roche, Basel, Switzerland).

Also, adiponectin, leptin, and insulin-like growth factor-1 (IGF-1) were isolated in blood samples collected by cardiac puncture after administration of anti-obesity candidate materials for 8 weeks. Each antibody was diluted in coating buffer and coated on a microwell for overnight incubation at 4 °C. Each well was washed three times with washing buffer, and 100 μL of serum was dispensed, incubated at room temperature for 1 h, and washed twice with washing buffer. Thereafter, 100 μL of the antibody avidin-horseradish peroxidase conjugate was added and incubated at room temperature for 1 h, and then washed again. The TMB substrate was dispensed in 100 μL, incubated in the dark for 30 min, and treated with 50 μL of stop solution, after which absorbance was measured at 450 nm.

The results are expressed as the mean ± standard deviation of triplicate experiments. An analysis of variance and Duncan’s multiple range tests were used to determine the significance at the p < 0.05 level.

α,α-Diphenyl-β-picrylhydrazyl (DPPH) is a very stable free radical and representative reaction substance used to measure antioxidant capacity. DPPH radical scavenging activity assay is a method that utilizes the principle that a purple compound is discolored as yellow when radicals are eliminated through hydrogen donation in a phenolic compound or flavonoid with a hydroxyl radical (-OH) [21]. For the extraction method, the radical scavenging activities of ethanol extracts were superior to those of hot water extracts. For the mixing ratio, EM05 (84.30%), EM06 (83.00%), and EM01 (81.65%) were superior in order, but there was no significant difference between these samples (Figure 1A).
The content of phenol, a representative antioxidant, was highest in EM03 (49.00 mg GAE/g), EM02 (48.40 mg GAE/g), and EM01 (47.90 mg GAE/g), with no significant difference between these samples (Figure 1B).
No cytotoxicity or changes in morphology were observed at the concentration of 100 μg/mL mixtures by XTT assay (Figure 1C). Next, the anti-adipogenic activity was measured by Oil-Red O staining, and EM01 (75.30%) was found to be the most effective mixture for inhibiting lipid accumulation among the 26 mixtures (Figure 1D). Therefore, we selected EM01 as an optimal mixture and carried out anti-obesity experiments using in vitro and in vivo models.

3.2. Effect of EM01 on Lipid Accumulation

3.4. Effects of EM01 on glucose tolerance in HFD-induced obese mice

3.5. Effects of EM01 on the Serum Lipid Profile in HFD-Induced Obese Mice

The HFD-CTL group showed significant increases in all parameters of the serum lipid profile compared to the ND group. The TC level was significantly decreased in the HFD-EM01 and HFD-Q3OG groups compared to in the HFD-CTL group (Figure 5A). HDL-cholesterol was lowered by more than LDL-cholesterol in these groups (Figure 5B,C). TC may decrease when LDL-cholesterol levels, often referred to as bad hormones, are suppressed [23]. The TG level was higher in the HFD-CTL group than in the ND group, but there was no significant difference between all groups compared to HFD-CTL (Figure 5D). AST, ALT, and creatinine are used as liver toxicity marker [24] and their levels were significantly lowered by EM01 administration (Figure 5E,F). This suggests that the 8-week oral administration did not affect liver and kidney toxicity in obese mice.

3.6. Effects of EM01 on the Energy Balancing Metabolism in HFD-Induced Obese Mice

In recent years, many side effects have been reported for drugs used for therapeutic purposes, and numerous clinical studies have examined natural products and natural product-derived compounds [26,27]. In this study, we confirmed the anti-obesity effect of three natural materials. In previous studies based on these materials, N. nucifera L was found to be a medicinal plant that is not only useful for treating gastritis, bleeding, diarrhea, hemorrhoids, and enuresis, but also contains various biologically active components such as polyphenolics, flavonoids, and tannic acid [28]. SOD, CAT, GST played as defence means against the reactive oxygen species in biological systems. TBARS are formed as a byproduct of lipid peroxidation. This material was reported to have anti-oxidative activity by increasing the levels of SOD, CAT, GST and decreasing TBARS level in liver [29] and anti-obesity activity in HFD-induced mice or anti-obesity activity for inducing apoptosis in 3T3-L1 adipocytes, but few studies have examined these effects [30]. Morus alba L, which is prepared for medicinal use such as treating headache, fever, and cough, shows pharmacological activities, particularly antidiabetic effects on lowering blood sugar [31]. Raphanus sativus is an herbaceous plant belonging to the cruciferous family and has been reported to have excellent anti-obesity efficacy [32]. Recent studies have demonstrated the anti-obesity activity of a single material, but the mechanism action of this material in a mixture has not been evaluated.
We selected EM01, which contains a high content of Nelumbo nucifera [16], among the 26 mixtures (13 kinds of hot water extracts and 13 ethanol extracts) through the antioxidant and anti-obesity experiments at in vitro model. EM01 treatment has an anti-obesity effect at in vivo model using C57BL/6J obese mice. The weight of HFD-induced mice was effectively lower and the weight of the adipose tissue was significantly decreased compared with the control.
Type 2 diabetes is one of the most common disabilities caused by obesity. Obesity directly affects insulin function, which causes glucose to enter the cell membrane for energy metabolism, resulting in insulin resistance and type 2 diabetes [33]. A glucose tolerance test was conducted to investigate the glucose processing ability. EM01 effectively lowered the blood glucose level. This result was similar to those of the glucose tolerance test using neferine an alkaloid compound extracted from N. nucifera seed [34].
EM01 reduced the serum lipid profile (TC, HDL-cholesterol, LDL-cholesterol, TG) of HFD-induced obese mice. It may be useful for preventing dyslipidemia induced by obesity [35]. AST, ALT, and creatinine are toxicity indicators of the liver and kidney [24]. EM01 reduced the levels of these markers in the serum and improved the function of each organ.
Adipocytes not only play a role as energy reservoirs but also regulate endocrine function. Adipokine, a hormone specifically expressed and secreted from adipocytes such as adiponectin and leptin, is involved in fatty acid and glucose metabolism. IGF-1 plays an important role in regulating adipose tissue growth. These adipokines interact closely with each other and regulate the hormonal system in the body [36]. EM01 significantly increased the adiponectin level and reduced leptin and IGF-1 level in serum. According to a previous study [37], glucose and lipid metabolism are regulated by insulin signaling. Glucose and fatty acid enter cells and are metabolized for glycogenesis and β-oxidation, respectively. Based on these results, our study confirms that EM01 improves the process of bringing glucose and fatty acid into the cells, resulting in anti-obesity and anti-diabetic effects.
Adipogenesis is the process of cell differentiation by which pre-adipocytes become adipocytes. PPARγ is a key factor in adipogenic transcription [1]. In this study, it was found that mRNA expression of PPARγ in the liver tissue was reduced by administration of EM01. Also, the expression levels of FAS, DGAT1, SCD-1, leptin, SREBP1c were decreased, while the expression levels of UCP2, PPARα, ACOX1, and adiponectin increased in the EM01, Q3OG treatment group in the liver. These results suggest that EM01 treatment inhibits adipogenesis of 3T3-L1 adipocytes and improves fatty acid oxidation. EM01 regulated lipid metabolism in epididymal adipose tissue and abdominal subcutaneous fat. Our results demonstrate that EM01 has an anti-obesity effect in 3T3-L1 adipocytes and C57BL/6J obese mice.

In conclusion, we observed the anti-obesity activity of EM01, which is an optimal mixed material containing N. nucifera L., M. alba L., and R. sativus in vitro and in vivo models. EM01 reduced lipid accumulation and weight gain, fat mass, serum lipid concentration, and mRNA expression levels of lipid-metabolism-related genes in HFD-induced obese mice. Therefore, our findings show that EM01 has potential as an effective material for anti-obesity treatment.

This research was funded Technology Development Program (C1013823-01-01) funded by the Ministry of SMEs and Startups (MSS, Korea).

This work was supported by the Technology Development Program (C1013823-01-01) funded by the Ministry of SMEs and Startups (MSS, Korea); NRF (National Research Foundation of Korea) Grant funded by the Korean Government (NRF-2018-Fostering Core Leaders of the Future Basic Science Program/Global Ph.D. Fellowship Program); The basic Science Research Program through the National Research Foundation of Korea (NRF) funded by the Ministry of Education (NRF-2017R1D1A3B06028469) and has been worked with the support of a research grant from Kangwon National University in 2017. 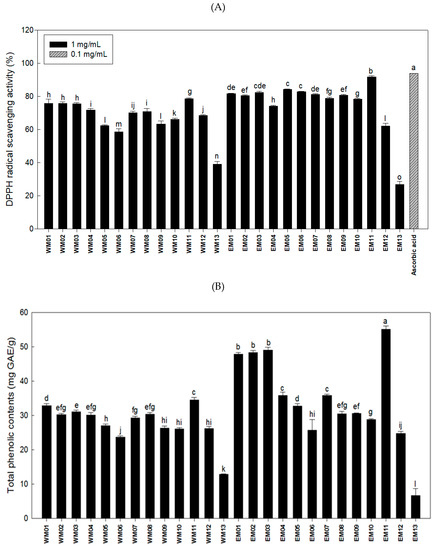 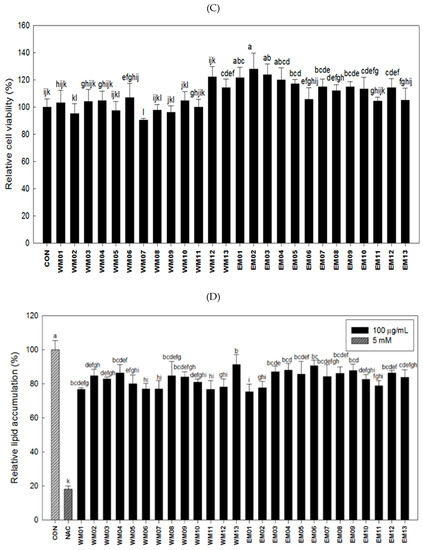 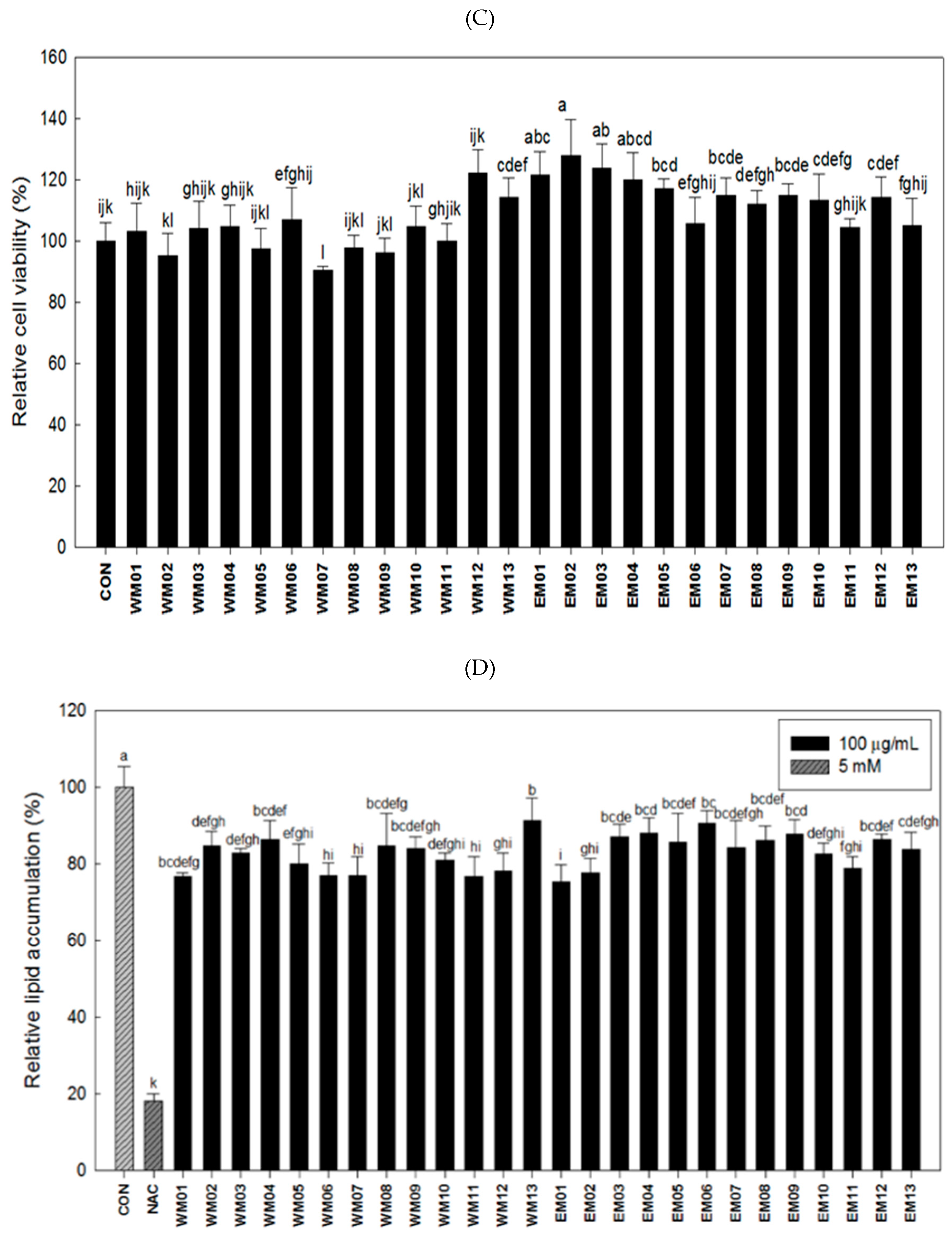 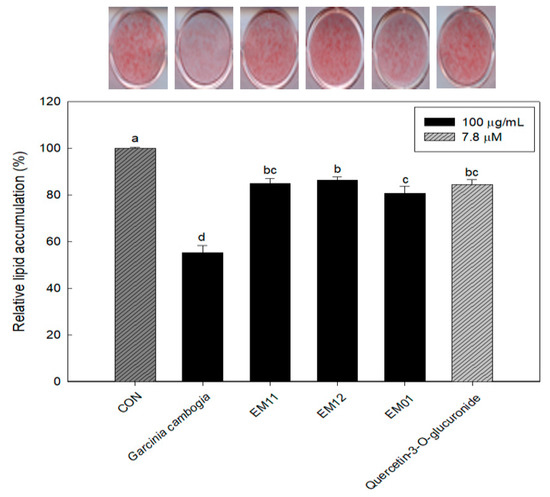 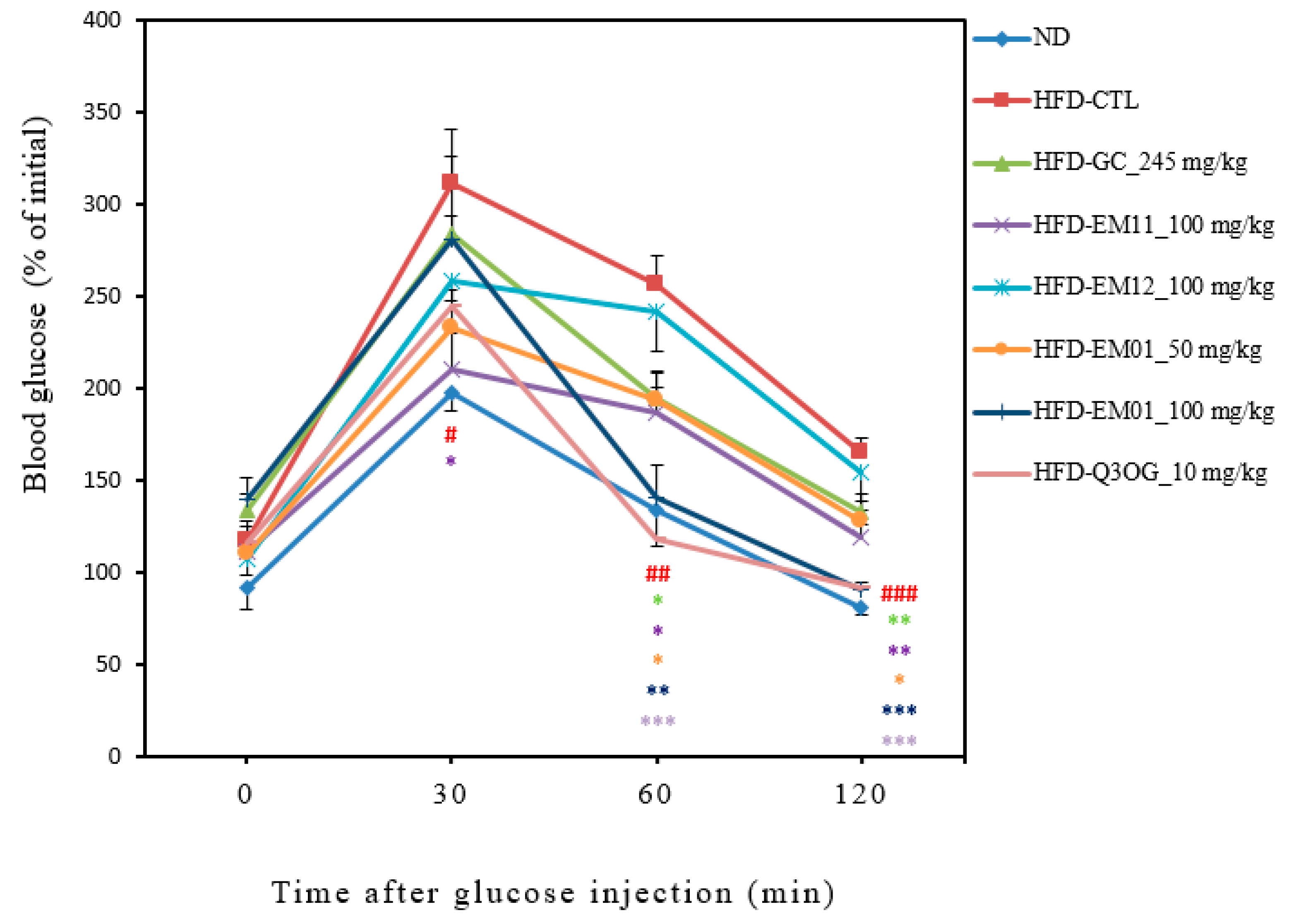 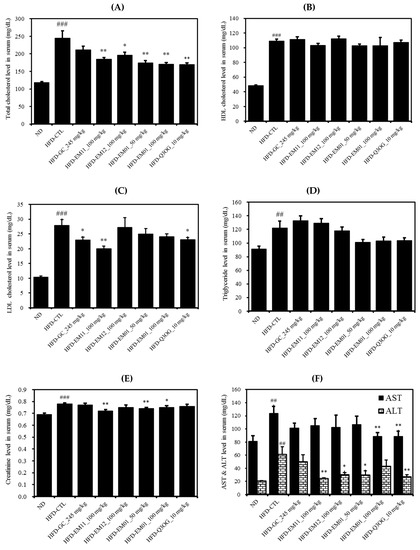 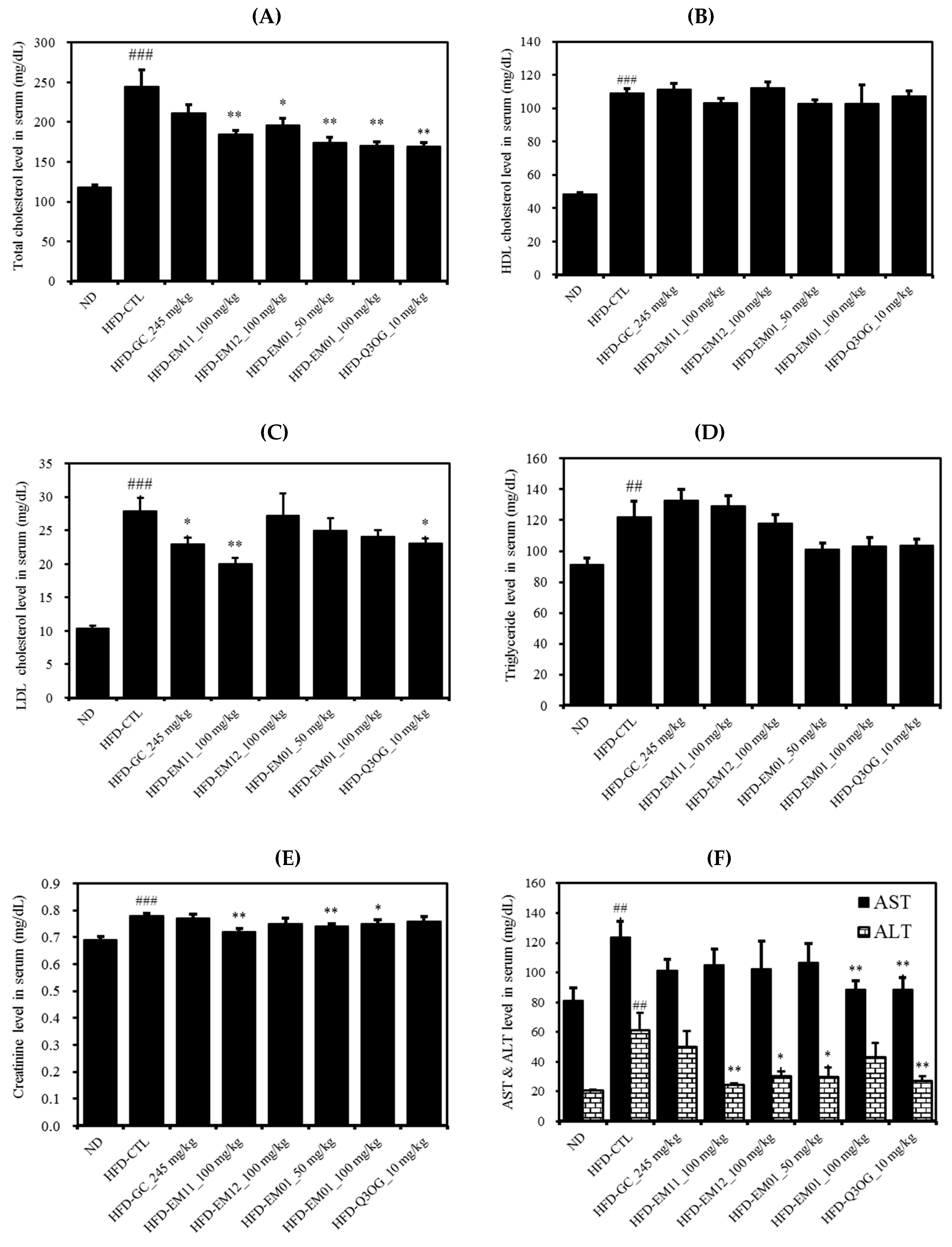 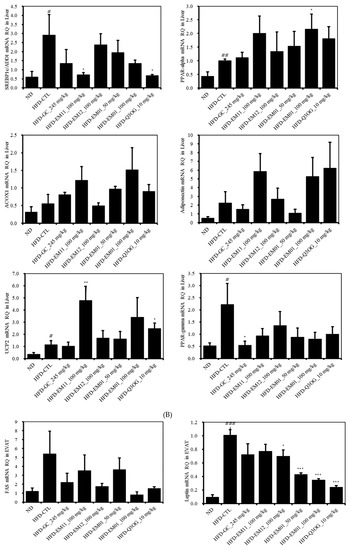 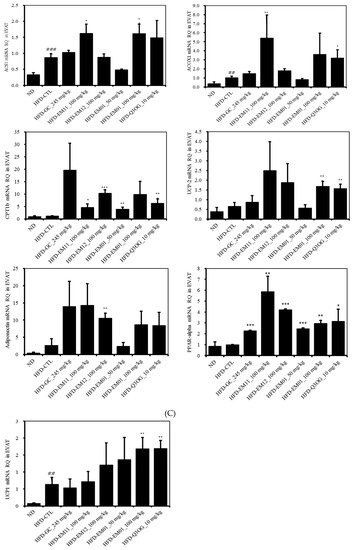 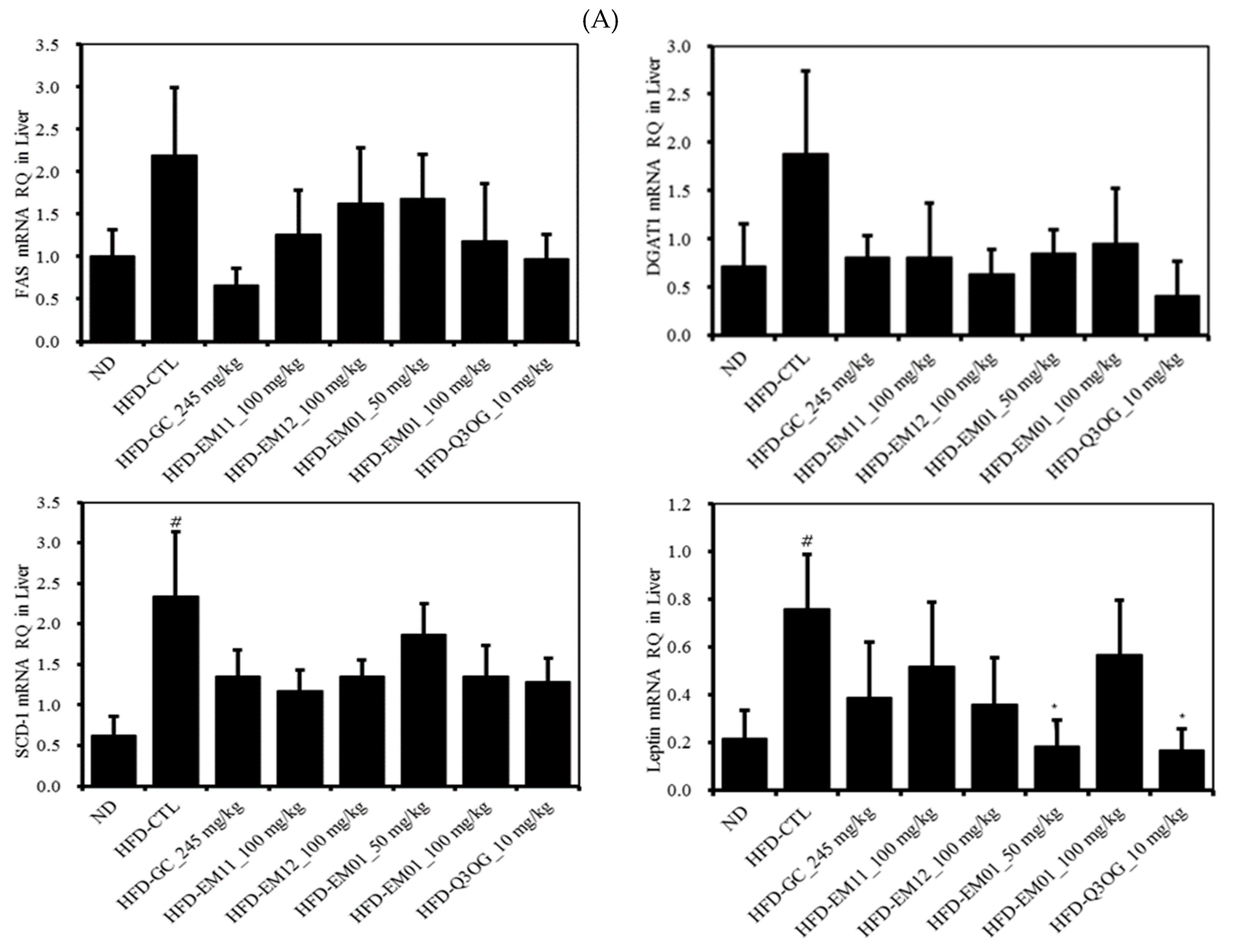 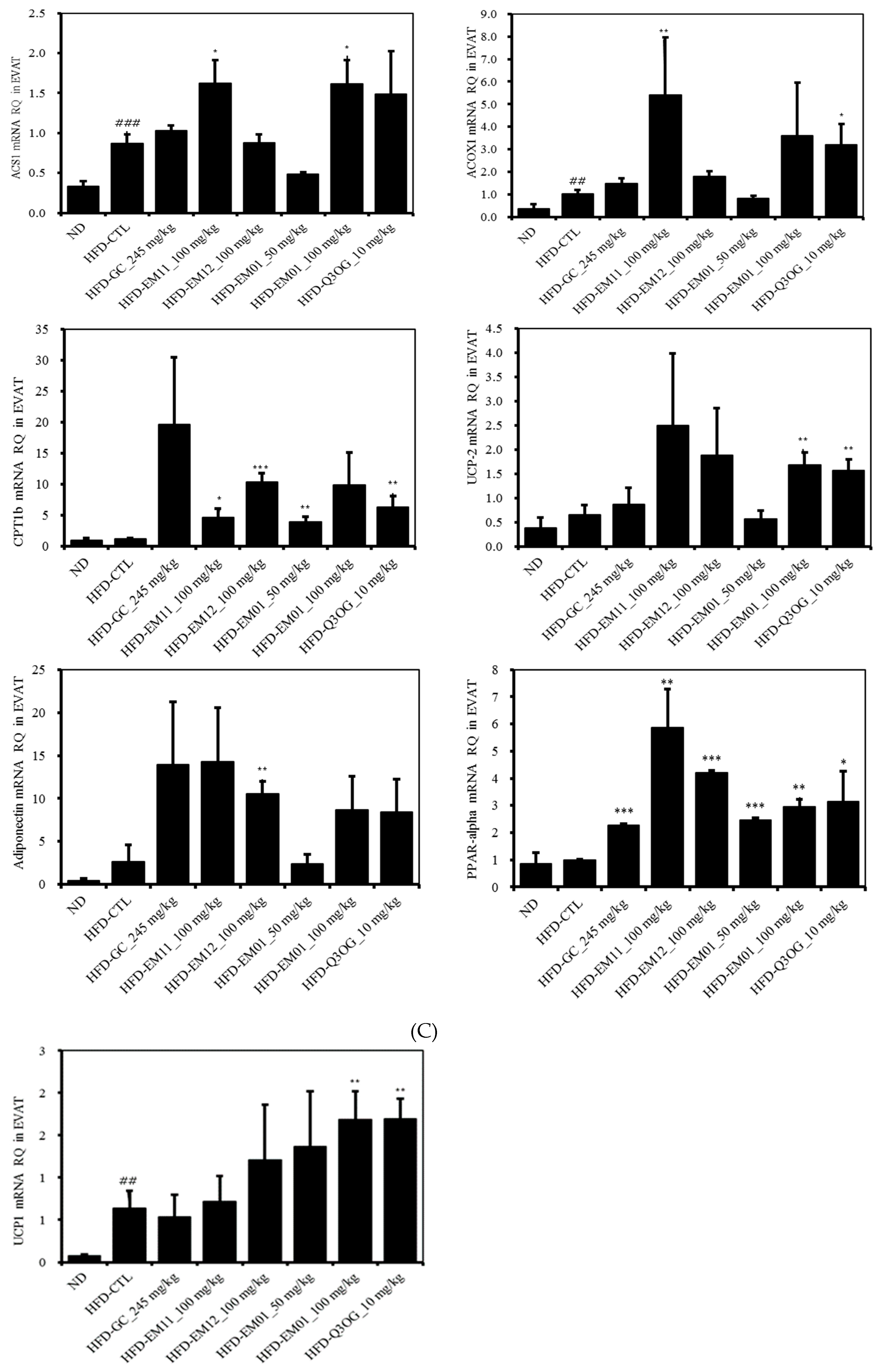