The production of lycopene from different substrates by Blakeslea trispora in fermentation was investigated. Lycopene productions from 4 and 6% glucose (pH 6.5) in shake flask fermentation were 77.7 and 28.1 mg L−1. Increasing the glucose concentration to 6% resulted in a decrease in lycopene production by 36.2%. A maximum lycopene concentration of 944.8 mg L−1 was detected with 4% glucose supplemented with 1.0 % sunflower oil in fermentor studies. Lycopene productions in the presence of sunflower and corn oils in the fermentor were 12.2 and 11.1 times higher, respectively, then without oil from 4 % glucose in a shake flask. Lycopene production from orange peel was two times higher in the fermentor than in the shake flask. Zygospores of B. trispora are the morphological forms, which are responsible for the production of the lycopene. The highest level of zygospores was correlated with the highest amount of intracellular lycopene in the total biomass dry weight. The media containing only orange powder (1%) gave a 4.9 mg L−1 lycopene production in a fermentor. The biosynthesis of lycopene has been started in most cases simultaneously in the early growth phase even in trace amounts. Maximum lycopene concentration was obtained when the medium was supplied with sunflower and corn oils. There is an indirect relationship between biomass and lycopene concentration. View Full-Text
Keywords: lycopene; Blakeslea trispora; fermentation; vegetable oil; orange powder lycopene; Blakeslea trispora; fermentation; vegetable oil; orange powder
►▼ Show Figures 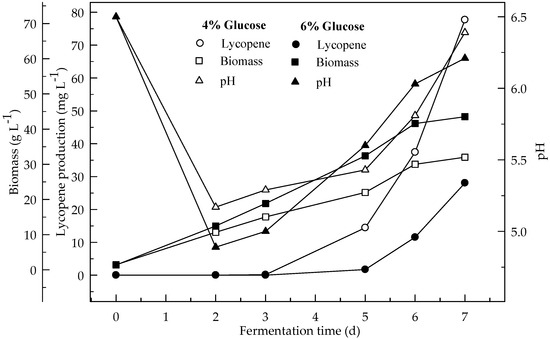