The skeletal muscle is the largest organ that contributes to maintaining physical locomotive function. It is also a major site of glucose and lipid metabolism and an endocrine organ with myokine secretions [1]. A number of epidemiological studies revealed that people with type 2 diabetes tend to have lower muscle strength and mass [2]. The potential underlying mechanism of this skeletal muscle dysfunction is linked to hyperglycemia, chronic inflammation, and oxidative stress [2].
Glycation is a biochemical process through which reducing sugars like glucose react and bond non-enzymatically with proteins. Glycation stress, which is caused by glycation and includes the formation of advanced glycation end products (AGEs) and a subsequent dysfunction of proteins and/or cellular signaling [3], are considered related with the progress of muscle dysfunctions. It has been reported that elevated AGEs in the blood or skin are negatively correlated with muscle mass, grip strength, and glucose tolerance in the elderly [4,5,6,7,8] and patients with diabetes [9]. Our recent study demonstrated that AGEs suppressed formation of myotubes in C2C12 skeletal muscle cells by deteriorating cellular signal transduction of protein synthesis and suggested that AGEs inhibited skeletal muscle formation and maturation [10]. Furthermore, serum AGE levels are related to diabetic complications in children and young adults with type 1 diabetes [11,12,13], thus indicating that glycation stress might affect skeletal muscle function regardless of age. In fact, our previous study revealed that the consumption of an AGE-rich diet for 16 weeks in young mice led to degenerative changes in skeletal muscle, including low muscle mass, low grip strength, low force relative to muscle mass, and muscle fatigability [14]. Furthermore, AGEs treatment in skeletal muscle has been illustrated to induce insulin resistance in young male and female rodents [15,16]. Therefore, inhibiting glycation stress is considered an effective strategy for preventing skeletal muscle dysfunction regardless of age.
AGEs lead to the activation of different signaling pathways mediated by several cell surface receptors. The activation of receptors for AGEs (RAGE) is considered as a major mediator of AGE pathogenicity [17,18]. Although the recruitment of RAGE stimulates myogenesis that is important for skeletal muscle development, the chronic stimulation of RAGE, due to high concentration of AGEs, causes myopathy through inflammatory responses [19]. In addition to RAGE, toll-like receptor 4 (TLR4) is involved in AGE-mediated inflammatory responses, such as cytokine production [20]. The interaction between AGEs-RAGE leads to activation of intracellular nuclear factor-κ B and subsequently increases the expression of several proinflammatory cytokines, including tumor necrosis factor-α (TNFα) and interleukin (IL)-6 [21]. Furthermore, AGEs stimulates the secretion of IL-6 through RAGE and/or TLR4 in macrophages [22]. A recent study has also demonstrated that AGEs-induced inflammatory responses occur via IL-1β in human placental cells [23]. These proinflammatory cytokines are known factors of muscle wasting [24] and insulin resistance [25], and thus the suppression of AGEs-associated inflammatory responses can be a target of maintaining muscle functions.
Propolis, a natural resinous substance produced by honeybees, is traditionally used in herbal medicine and has recently been suggested to possess several biological properties including anticancer, antioxidant, and anti-inflammatory activities [26]. The wide diversity of plant species used by bees as resin sources for propolis production determines its chemical diversity by region. Among propolis of various production area, Brazilian propolis contains a number of phenolic compounds such as artepillin C, p-coumaric acids, and kaempferide [27,28], and has become a popular health supplement due to its many biological properties [29]. Recent studies have reported that several polyphenol substances exert anti-glycation functions by inhibiting the formation of AGEs, promoting their degradation, and by exerting an antagonizing effect on AGE receptors [30]. This suggests that Brazilian propolis may possess an anti-glycation capacity and contributes to maintaining skeletal muscle functions. Previous studies demonstrated that European poplar type of propolis have anti-glycation activity in vitro [31,32,33]. However, no reports have investigated the anti-glycation effects of Brazilian propolis and its efficacy in vivo.
In the present study, we aimed to examine the protective effect of Brazilian propolis against glycation stress in the skeletal muscle. To this end, we subjected the skeletal muscles of mice to glycation stress using methylglyoxal (MGO), a precursor of AGEs, for 20 weeks and investigated the effect of Brazilian propolis on alleviation of this stress.

Twenty-four male C57BL/6NCr mice (4-weeks-old) were purchased from Shimizu Breeding Laboratories (Kyoto, Japan). The mice were placed in a room maintained at 22–24 °C with a 12:12 h light/dark cycle. After 1 week of adjustment, the mice were randomly divided into four groups (n = 6/group): (1) Normal diet (AIN-93G; Oriental Koubo, Tokyo, Japan) + drinking water (N), (2) Brazilian propolis (0.1%)-containing diet + drinking water (PRO), (3) normal diet + MGO (0.1%)-containing drinking water (MGO), and (4) Brazilian propolis (0.1%)-containing diet + MGO (0.1%)-containing drinking water (MGO + PRO). The Brazilian propolis powder of ethanol extracts (LY-009), standardized to contain a minimum of 8.0% artepillin C was obtained from Yamada Bee Company, Inc. (Okayama, Japan). The Brazilian propolis was originated from Baccharis dracunculifolia of Southeast Brazil. The nutritional information of AIN-93G and Brazilian propolis powder of ethanol extracts is listed in Table 1. The doses of propolis and methylglyoxal, and their duration of intake were determined by previous experimental studies [34,35]. For each group, all mice were housed in a single cage and provided free access to food and drinking water for 20 weeks. Body weight was measured once every two weeks. Food and fluid intakes were measured during two consecutive days every two weeks and averaged as grams per day per mouse.
At the end of the study period, the slow-twitch soleus muscle and fast-twitch extensor digitorum longus (EDL) muscles and tibia were collected from each mouse under anesthesia using mixtures of medetomidine hydrochloride (0.3 mg/kg), midazolam (4.0 mg/kg), and butorphanol (5.0 mg/kg). All animal protocols were carried out in accordance with the Guide for the Care and Use of Laboratory Animals by the National Institutes of Health (Bethesda, MD, USA) and were approved by the Kyoto University Graduate School of Human and Environmental Studies (approval number: 28-A-2, approval date: 2016.3.29).

The anti-glycation activity of propolis was performed using the Albumin Glycation Assay Kit (AAS-AGE-K01, Cosmo Bio, Tokyo, Japan). Briefly, propolis was dissolved in dimethyl sulfoxide at a concentration of 0, 0.1, 1, 10, and 100 mg/mL, and the solutions were incubated with 50 mM glyceraldehyde and bovine serum albumin solutions for 48 h at 37 °C. The fluorescence of AGEs was estimated using a fluorescence microplate reader equipped with a 355 nm excitation filter and 460 nm emission filter. Inhibitory effects of AGE formation were expressed as percent change relative to the value of a solution containing 20 mM aminoguanidine.

The activity of glyoxalase 1 in muscles was measured using a Glyoxalase I Activity Assay Kit (Colorimetric) (K591-100, BioVision, San Diego, CA, USA) according to the manufacturer’s protocol.

All values were expressed as means ± SE. For each group of data, normality (the Kolmogorov–Smirnov test) and equal variance tests (Levene’s test) were performed and data that were not normally distributed were log-transformed before the analysis of variance (ANOVA). The statistical significance of differences in body weight, food intake, and fluid intake between groups was determined via a repeated-measures ANOVA. The statistical significance of differences in muscle weight, MGO-derived AGEs content, and mRNA expression was analyzed using two-way ANOVA with propolis and MGO as the main factors. In the event of significant main effects and/or interactions, post hoc Tukey-Kramer tests were performed. Differences between groups were considered statistically significant at p < 0.05. All statistical analyses were performed using the Ekuseru-Toukei 2012 software (Social Survey Research Information, Tokyo, Japan).

3.2. The Effect of Brazilian Propolis on Body Weight, Food and Fluid Intake, and Muscle Weight

3.3. Brazilian Propolis Suppressed the Accumulation of MGO-Derived AGEs in the Skeletal Muscle In Vivo

To evaluate the ability of Brazilian propolis to detoxify MGO in the skeletal muscle, the activity of glyoxalase 1, a dicarbonyl compound eliminating enzyme, was measured in the EDL and soleus muscles. In the EDL, two-way ANOVA revealed a significant main effect of propolis, but not MGO (propolis, p = 0.038; MGO, p = 0.49) (Figure 3). In the soleus muscle, no significant alterations in glyoxalase 1 activity was observed via ANOVA (MGO, p = 0.25; propolis, p = 0.47) (Figure 3). 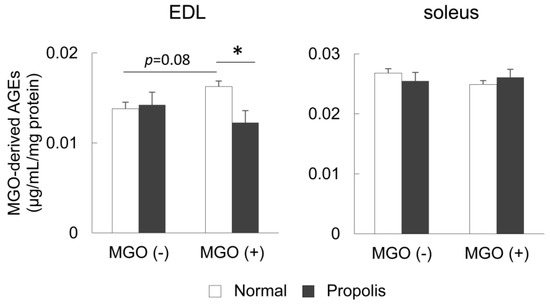 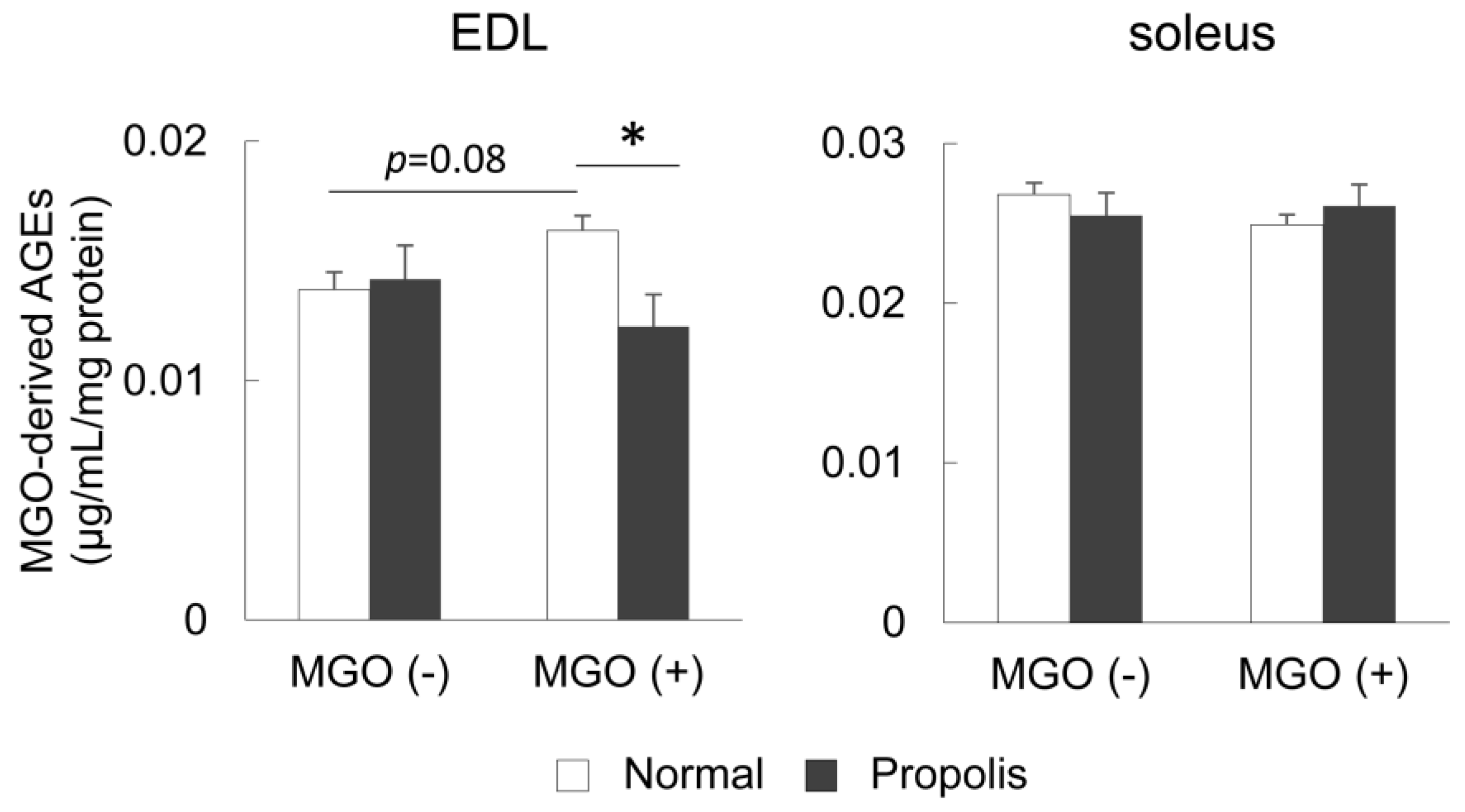 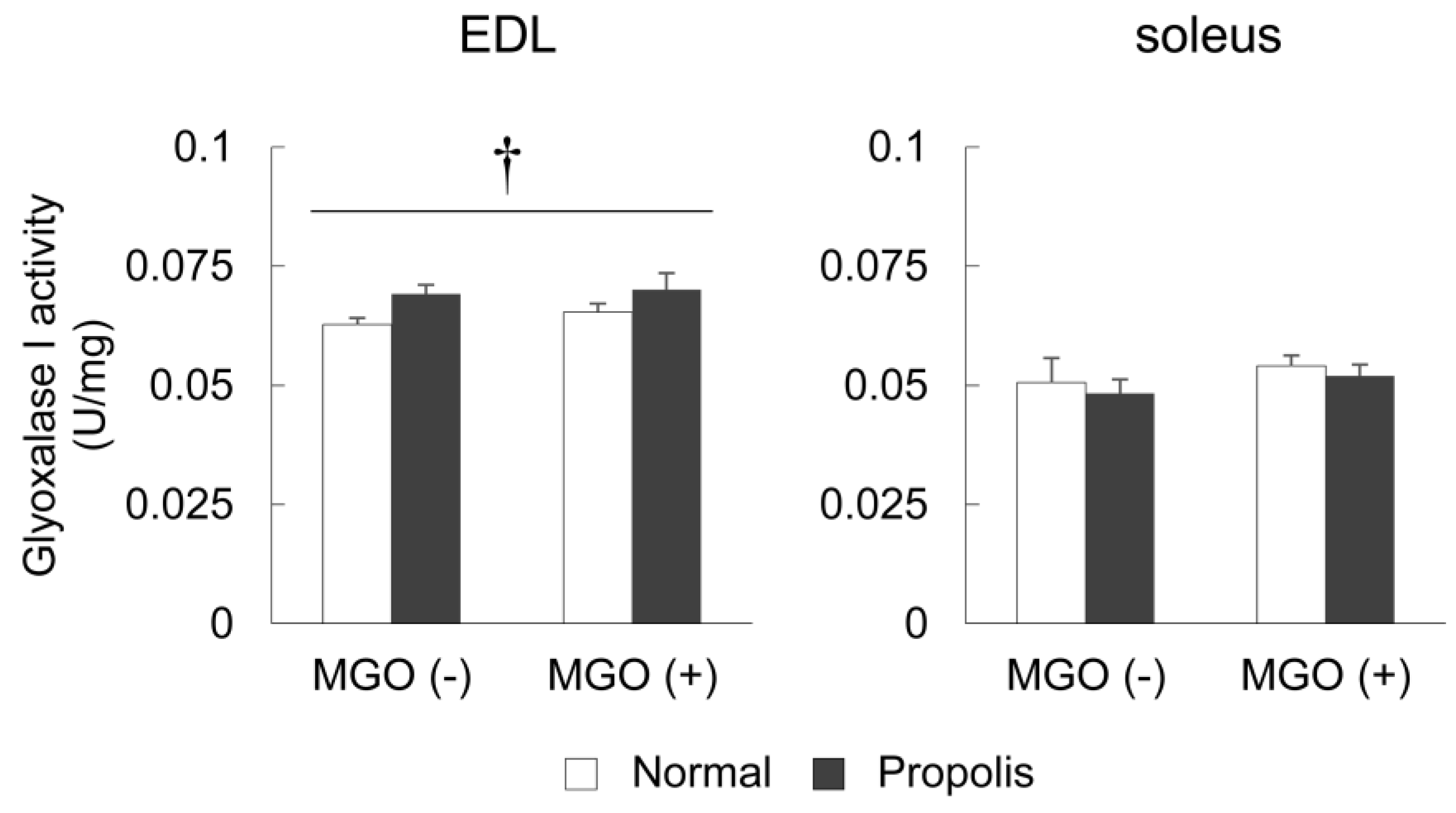