Functional and Bioactive Properties of Food: The Challenges Ahead

1-Kestose, the Smallest Fructooligosaccharide Component, Which Efficiently Stimulates Faecalibacterium prausnitzii as Well as Bifidobacteria in Humans

The concept of prebiotics was established more than 30 years ago. While the prebiotic concept has now expanded thus includes non-carbohydrate substances and diverse categories other than foods, fructooligosaccharides (FOS) have still predominantly been used as pebiotics, because the effects of FOS exclusively act through the enrichment of Bifidobacterium and Lactobacillus spp., which have been classified as beneficial intestinal commensals so far. Now the commercially available FOS products are synthetic mixture of several kinds of FOS components including 1-kestose (GF2), nystose (GF3) and GF4. In our previous studies, superiority of 1-kestose to the longer-chain FOS components such as nystose with regard to bifidogenic activity was clearly demonstrated. Recently, a broader range of beneficial bacteria including butyrate-producing indigenous bacteria have been recognized and expected to be new probiotic strains. Among them, resident Faecalibacterium prausnitzii is a butyrate producer with a significant anti-inflammatory effect thus expected to be useful as a next-generation probiotic. However, this bacterium is extremely oxygen-sensitive thus can be difficult to grow industrially. On the other hand, we have clearly demonstrated a significant prebiotic effect of 1-kestose, which is the smallest component of FOS, on F. prausnitzii in the gut of humans. These findings suggest that 1-kestose has impressive potential as a new prebiotic targeting F. prausnitzii, a next-generation probiotic strain, as well as bifidobacteria. View Full-Text
Keywords: prebiotics; 1-kestose; fructooligosaccharides; Faecalibacterium prausnitzii; butyrate prebiotics; 1-kestose; fructooligosaccharides; Faecalibacterium prausnitzii; butyrate
►▼ Show Figures 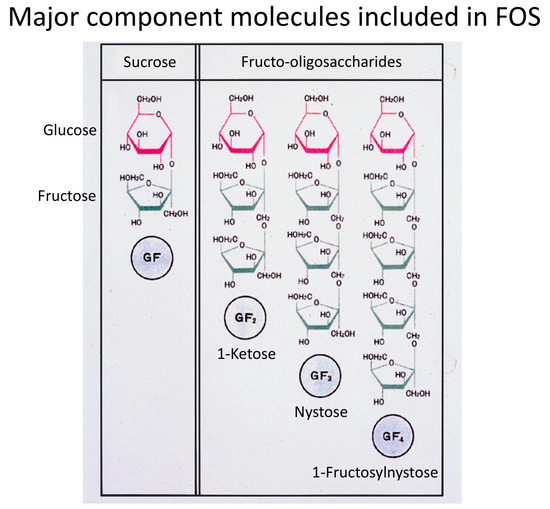