Spices are known to provide orosensory stimulation that can potentially influence palatability, appetite, and energy balance. Previous studies with individual spices have shown divergent effects on appetite and energy intake measures. In a real-life context, however, several spices are consumed in combinations, as in various forms of curries. Therefore, we investigated changes in postprandial appetite and plasma ghrelin in response to the intake of two doses of curry prepared with mixed spices. The study was undertaken in healthy Chinese men, between 21 and 40 years of age and body mass index ≤27.5 kg/m2. Appetite was measured using visual analogue scales (VAS) and plasma ghrelin was measured using multiplex assay. Compared with the control meal (Dose 0 Control (D0C), 0 g mixed spices), we found significantly greater suppression in ‘hunger’ (both p < 0.05, after Bonferroni adjustments) as well in ‘desire to eat’ (both p < 0.01) during the Dose 1 Curry (D1C, 6 g mixed spices) and Dose 2 Curry (D2C, 12 g mixed spices) intake. There were no differences, however, in plasma ghrelin or in other appetite measures such as in ‘fullness’ or in ‘prospective eating’ scores. Overall, the results of our study indicate greater inter-meal satiety due to mixed spices consumption, independent of any changes in plasma ghrelin response. View Full-Text
Keywords: spices; curry; ghrelin; appetite response spices; curry; ghrelin; appetite response
►▼ Show Figures 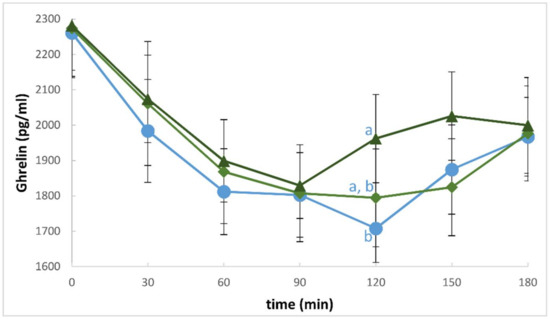