In the Netherlands, butter is produced from milk originating from three different production systems: conventional production, organic production, and a specialized part of the conventional system in which cows are grass-fed. According to European regulations (EC Regulation 889/2008 [1]), organic milk comes from cows that can roam freely (weather and health permitting) and are fed organic feed which contains at least 60% roughage. Their diet cannot contain genetically modified ingredients. Furthermore, the use of synthetic fertilizers, synthetic medicines, antibiotics for preventive use, and synthetic growth hormones are not allowed in organic farming. Organic farming is more expensive than conventional farming, for example because organic cows have lower milk yields. Therefore, other initiatives which present a positive image for consumers have appeared on the market, such as for dairy products made from milk produced by grazing cows. For example, grass butter is made from milk produced by cows with access to fresh grass. In the past, grass butter was only produced during a short period of the year when cows are transferred from the stables to the pasture, but nowadays all the milk produced by cows that are fed fresh grass is used. However, in Europe, there are no legal requirements for the use of the term “grass butter”.
Organic butter and grass butter are assumed to be more animal and environmentally friendly and sometimes perceived as being healthier by the consumer. The applicability of several methods to authenticate the types of milk fat, in general, has been evaluated: analytical methods that were found to be capable of distinguishing conventional and organic milk fat were, for example, the contents of α-tocopherol and β-carotene [2,3]; the stable isotope ratio of carbon and the content of α-linolenic acid (C18:3n3) [4,5]; 1H-NMR and 13C-NMR [6]; and triglyceride (TG) and fatty acid (FA) profiles [7,8,9,10]. The fatty acid profiles of retail organic milk were found to be significantly different from the FA profiles of conventional and pasture milk [8]. Published data on butter showed that conventional and organic butter had a significantly different FA profile [11]. Data on the composition of grass butter are missing. Seasonal effects on the fat composition of butter and milk have been investigated before for Irish [12] and Polish [13] conventional butters and for Dutch raw milk [14]. Significant differences in the TG and FA profile between butters produced in summer and in winter were found, which may result from the alternative feeding systems employed in summer, i.e., pasture versus indoor feeding [13].
Apart from different feeding regimes for the cows, processing can also specifically alter the fat composition. For example, microbial lipases can be added or they can be produced by the microorganisms used for the inoculation of the cream, as is done in Europe and Asia. These lipases can catalyze the interesterification of FAs to obtain a desirable positional distribution of FAs on the TGs [15]. In addition, milk fat can be fractionated into portions of TGs. This can either be done by crystallization of melted fat, or methods based on the different solubility and volatility of groups of TGs [16]. These fractions can be added again to the final product. These alterations can be performed in order to obtain a final product with the desired sensory (mainly taste and color), physical (e.g., spreadability versus firmness), chemical, and nutritional characteristics.
The aim of the current study was to characterize retail full-fat conventional, organic, and grass butters, and pinpoint distinct differences in their fat composition. Fat content, free fatty acid content, as well as triglyceride and fatty acid profiles were examined.

The fat content was determined gravimetrically in duplicate according to NEN-EN-ISO 17189:2003 | IDF 194 [17]. In short, fat was extracted from the sample (4–6 g) using petroleum ether. The solvent and fat phase were separated and the solvent was removed by evaporation. The mass of substances extracted was determined.

The content of free fatty acids (FFA) was determined titrimetrically in duplicate, conforming with NEN-ISO 1740:2004 | IDF 6 [18]. In short, a sample (containing 5–10 g fat) was solubilized in petroleum ether 60–80%. Sodium thymol blue solubilized in 2-propanol was added as an indicator. Titration took place in the presence of nitrogen gas using tetra-n-butyl ammonium hydroxide until the color changed.

Triglyceride analysis was carried out in duplicate according to ISO 17678 | IDF 202 [19] by gas chromatography with a flame ionization detector (GC-FID), as described by Capuano et al. [7]. TGs were identified by comparing their retention times with those found in standard mixtures. Results were expressed as normalized peak areas (% total TG + cholesterol).

Fatty acid analysis was carried out according to ISO 16958 [20] by capillary gas chromatography after direct transesterification of the samples. Fatty acids were identified by comparing their retention times with those of standard mixtures (GLC 36 mix (Nu-Check Prep INC, Elysian, MN, USA)). Results were expressed as normalized peak areas (% on total fatty acids).

The normality of the distributions of fat contents, FFA contents, TG profiles, and FA profiles within the groups—conventional, organic, and grass butters—were checked using the Shapiro–Wilk test. Distributions appeared to be non-normal (Shapiro–Wilk: p < 0.05). Therefore, the Kruskal–Wallis test for group comparison was performed among the groups. If the Kruskal–Wallis test was significant (p < 0.05), pairwise comparisons between groups were subsequently performed by means of the Mann–Whitney U test. SPSS version 23.0.0.2 (IBM Corp., Armonk, NY, USA) was used to perform those tests. The same procedure was followed to check significant differences between samples purchased in winter and samples purchased in summer and between salted and unsalted butter samples.
Principal Component Analysis (PCA) was performed using The Unscrambler (Version X 10.3, CAMO Software, Oslo, Norway). The (I × J) data matrix consisted of I = 54 rows (butter samples) and J = 17 columns for the TGs and J = 35 columns for the FAs. Raw data were auto-scaled prior to PCA.

In the present study, retail conventional, organic, and grass full-fat butters were analyzed for their fat contents, FFA contents, TG profiles, and FA profiles. Samples were collected in winter and in summer in order to identify robust differences in the production systems. Where substantial differences between the butters purchased in winter and those purchased in summer were found, these are described in the text. No significant differences between unsalted and salted butters were observed, therefore, no distinction is made between these groups in the results section.

The average TG and cholesterol profiles of conventional, organic, and grass full-fat butters are shown in Table 2. The most abundant TGs in butter were those containing 36, 38, and 50 acyl carbon atoms (CN36, CN38, and CN50, respectively). These were also found to be the most abundant TGs in Polish butters [13]. Differences between types of butter were small, however, some TGs were significantly different in the different types of butter. The TGs CN40, CN44, CN46, and CN48 were found to be significantly different in conventional butters compared with organic and grass butters. CN24, CN26, and CN54 were significantly different in conventional butters compared with organic butters, but not with grass butters. The results of the TG profiles are also visualized in a Principal Component Analysis (PCA) plot (Figure 1). Conventional and organic butters tend to be distinguishable, but grass butters are not. The distinction of pasture milk from conventional milk has also been proven difficult based on the TG profiles [8]. Generally, no obvious seasonal effects on the TG profiles were observed.

In conclusion, the present study showed that the triglyceride (TG) and fatty acid (FA) profiles of organic butters differed significantly from their conventional counterparts. The distinction of grass butters was not possible based on TG and FA profiles. To continue the verification of the production type of butter based on fat content and composition, more samples should be collected to provide insight into differences between years, seasons, and brands. To be able to evaluate the seasonal effect in greater detail, butters could be collected in consultation with producers directly after production.

The authors gratefully acknowledge the Dutch Ministry of Economic Affairs for financial support. 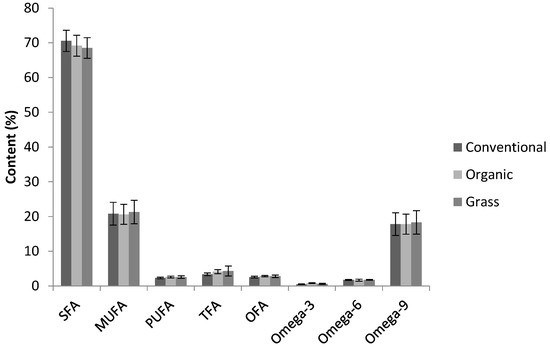