Two strains of Salmonella (S. Weltevreden SFL 0319 isolated from shrimp and S. Newport ATCC 6962 isolated from meat) and three stains of L. monocytogenes (Scott A from clinic samples, and M0507 and SFL0404 both from shrimp samples) were used in this study. Each strain was grown in 10 mL of tryptic soy broth (TSB; BD Bacto™, Becton, Dickinson and Company, Sparks, MD, USA) at 35 ± 2 °C for 10–12 h. One loopful (~ 1 μL) of each enrichment was streaked onto a tryptic soy agar (TSA; BD BBL™ TSA II, Becton, Dickinson and Company) plate and incubated at 35 ± 2 °C overnight (~ 18 h). A single colony on the TSA plate was transferred to 10 mL of TSB and incubated overnight at 35 ± 2 °C to produce a culture suspension of 108–9 CFU/mL. The culture was diluted with Butterfield’s phosphate diluent (BPD, pH 7.2) to 105–7 or 104–6 CFU/mL for high-level or low-level inoculation of samples.

Frozen raw yellowfin tuna blocks (approximately 450 grams per block) without blood and skin were purchased from local retail stores and stored at −70 °C before use. Initial tests of samples found no Salmonella or Listeria monocytogenes in the samples.
Frozen tuna samples were thawed in a refrigerator (5–7 °C) overnight and then cut into small cubes (approx. 1.0 cm × 1.0 cm × 1.0 cm). Cut tuna cubes were placed in a sterile container on ice and mixed with each culture suspension thoroughly to achieve a contamination level of 103–105 CFU/g or 102–104 CFU/g. Inoculated samples were aseptically transferred to sterile stomacher bags (15.2 cm × 22.9 cm, Whirl-Pak, Nasco, Modesto, CA, USA) with each bag containing 25 g of sample. All bags were sealed and stored in a refrigerator (5–7 °C) for 14 days or in a walk-in freezer (−18 ± 2 °C) for 12 weeks. Two batches (14 bags/batch) of samples without pathogen inoculation were prepared as controls for determination of aerobic plate counts and psychrotrophic bacterial counts during refrigerated and frozen storage. For refrigeration storage, samples were analyzed for Salmonella and L. monocytogenes every two days. For frozen study, samples were analyzed every two weeks for 12 weeks.

Pour plate method using trypticase soy agar (TSA) was used to determine aerobic and psychrotrophic bacteria of yellowfin tuna cubes during refrigerated and frozen storage. At each sampling time, two bags of tuna cubes were withdrawn from refrigerator or freezer. The frozen tuna samples were thawed at refrigeration temperature for 2 h before analysis. Each sample was homogenized with 225 mL BPD at speed of 260 rpm for 1 min in a stomacher laboratory blender (Model 400 C, Seward Laboratory Blender Stomacher, Worthing, UK) to prepare a sample suspension (1:10). Serial ten-fold dilutions of the suspension were prepared with the BPD. One mL of each sample dilution was transferred to two petri dishes and mixed with melted TSA (47.5 °C), individually. Solidified TSA plates were inverted and incubated at 35 ± 2 °C for 48 h for aerobic plate counts (APC) and at 7 °C for 10 days for psychrotrophic bacterial counts (PBC) [16]. Results were reported as means (CFU/g) of four determinations.

Surface-plating method on selective media specific for Salmonella (xylose lysine deoxycholate agar (XLD), EMD, Darmstadt, Germany) and L. monocytogenes (Oxford agar base (BD Difco™, Becton, Dickinson and Company, Sparks, MD, USA) supplied with Oxford agar supplement (HiMedia, HiMedia Laboratories Pvt. Ltd., Mumbai, India)) were used to determine the populations of target pathogens in inoculated tuna samples during storage. At each sampling time, two bags of tuna samples were removed from refrigerator or freezer to prepare sample suspension as previously described. Each sample dilution (0.1 mL) was spread on XLD or Oxford agar plates in duplicate plates with a sterile, L-shaped, polypropylene spreader. The XLD and Oxford agar plates were incubated at 35 ± 2 °C for 24 and 24–48 h, respectively. After enumeration, one typical colony (big black colony with opaque pink edge on XLD media for Salmonella or black colony surrounded by black halo on Oxford agar for L. monocytogenes) was transferred to 10 mL of TSB and incubated overnight (~ 18h) at 35 ± 2 °C for confirmation as Salmonella or L. monocytogenes by the polymerase chain reaction (PCR) assays using the primers (Table 1) and procedures described by Rahn et al. [17] and Chen and Knabel [18], respectively.

For tuna samples stored at 5–7 °C, the initial levels of APC (3.69 log CFU/g) and PBC (3.98 log CFU/g) of the samples (on day 0) remained unchanged nearly two days and then increased rapidly to 7.36 and 7.61 log CFU/g on day 6, respectively (Table 2).
It is well-known that psychrotrophic bacteria grow better than mesophilic bacteria in seafood during refrigeration storage and cause spoilage of seafood products [19]. Therefore, analysis of psychrotrophic bacteria in seafood is highly recommended due to wide usage of refrigerated storage for seafood [20]. According to the International Commission on Microbiological Specifications for Foods, the microbiological limit for defective quality is 107 CFU/g [21]. Therefore, quality of tuna samples became unacceptable after 6 days of storage at 5–7 °C with a shelf life of less than 6 days. The increases of APC and PBC in tuna samples during refrigerated storage suggested that raw tuna shouldn’t be consumed after being stored in a refrigerator for more than 5 days due to deterioration of products.
For tuna samples stored in a freezer (−18 ± 2 °C), no significant changes in APC or PBC were observed after 12 weeks of frozen storage (Table 3). This indicates that most of bacteria in tuna samples were able to survive during frozen storage at −18 ± 2 °C for nearly 3 months. Therefore, thawed frozen tuna meat should be stored at low temperature (5–7 °C) to retard growth of PBC before consumption.

3.2. Behavior of Salmonella and Listeria monocytogenes in Tuna during Refrigeration Storage

3.3. Survival of Salmonella and L. monocytogenes in Tuna during Frozen Storage

Thawed raw tuna became spoiled (aerobic plate counts >107 CFU/g) after 6 days of storage at 5–7 °C. Growth of Salmonella was inhibited in tuna during refrigerated storage, while L. monocytogenes was able to multiply significantly during refrigerated storage. Even though the populations of Salmonella and L. monocytogenes declined gradually over 12 weeks of frozen storage at −18 °C, all strains survived frozen storage, except that Salmonella Newport 6962 decreased to undetectable level after 7 weeks of frozen storage at inoculation level of 103 log CFU/g. These results demonstrate that raw tuna and other seafood destined for direct consumption as RTE seafood must be handled properly during the whole food chain (from farm to table) to reduce the risks of foodborne illness caused by Salmonella, L. monocytogenes and other pathogens. 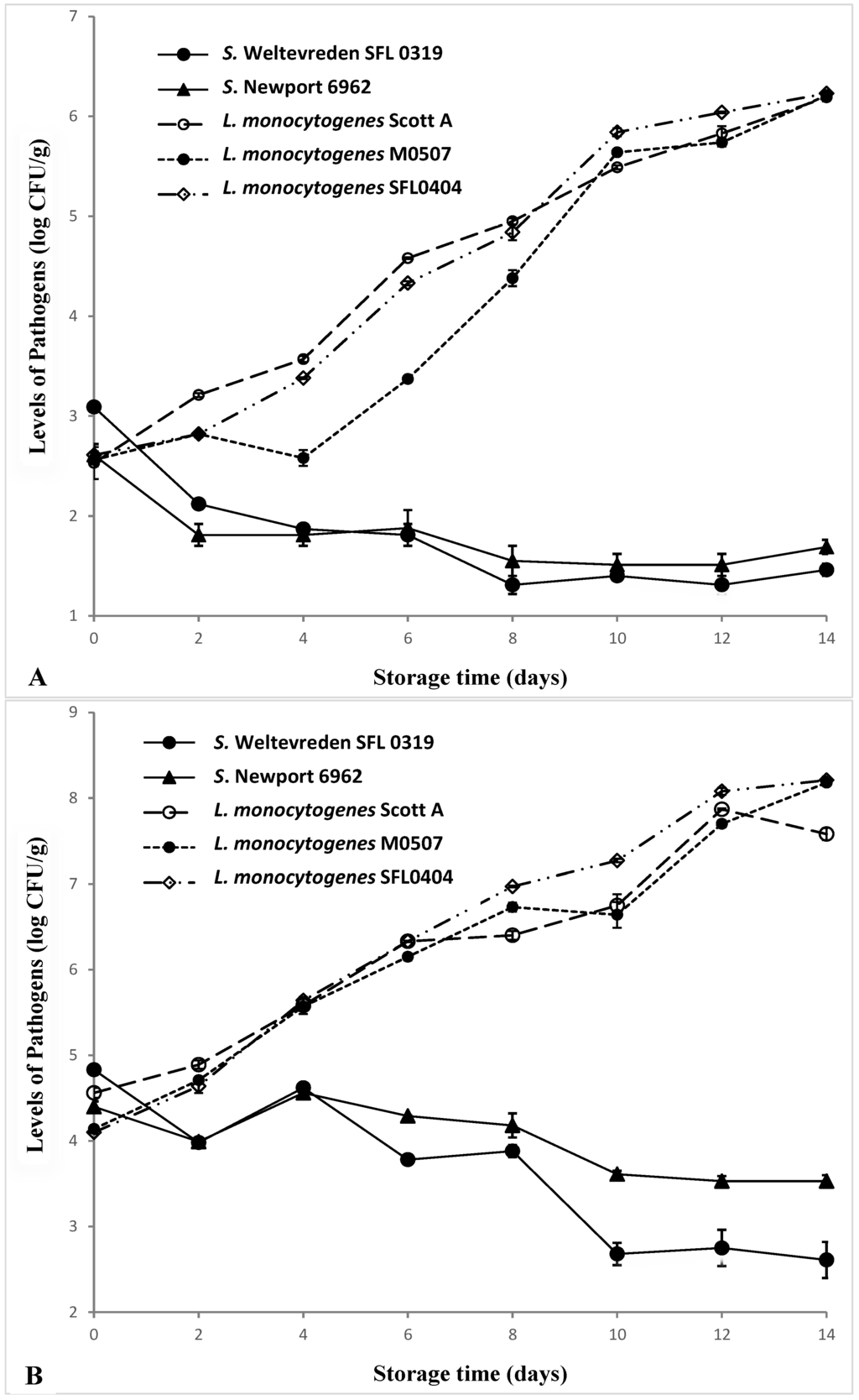 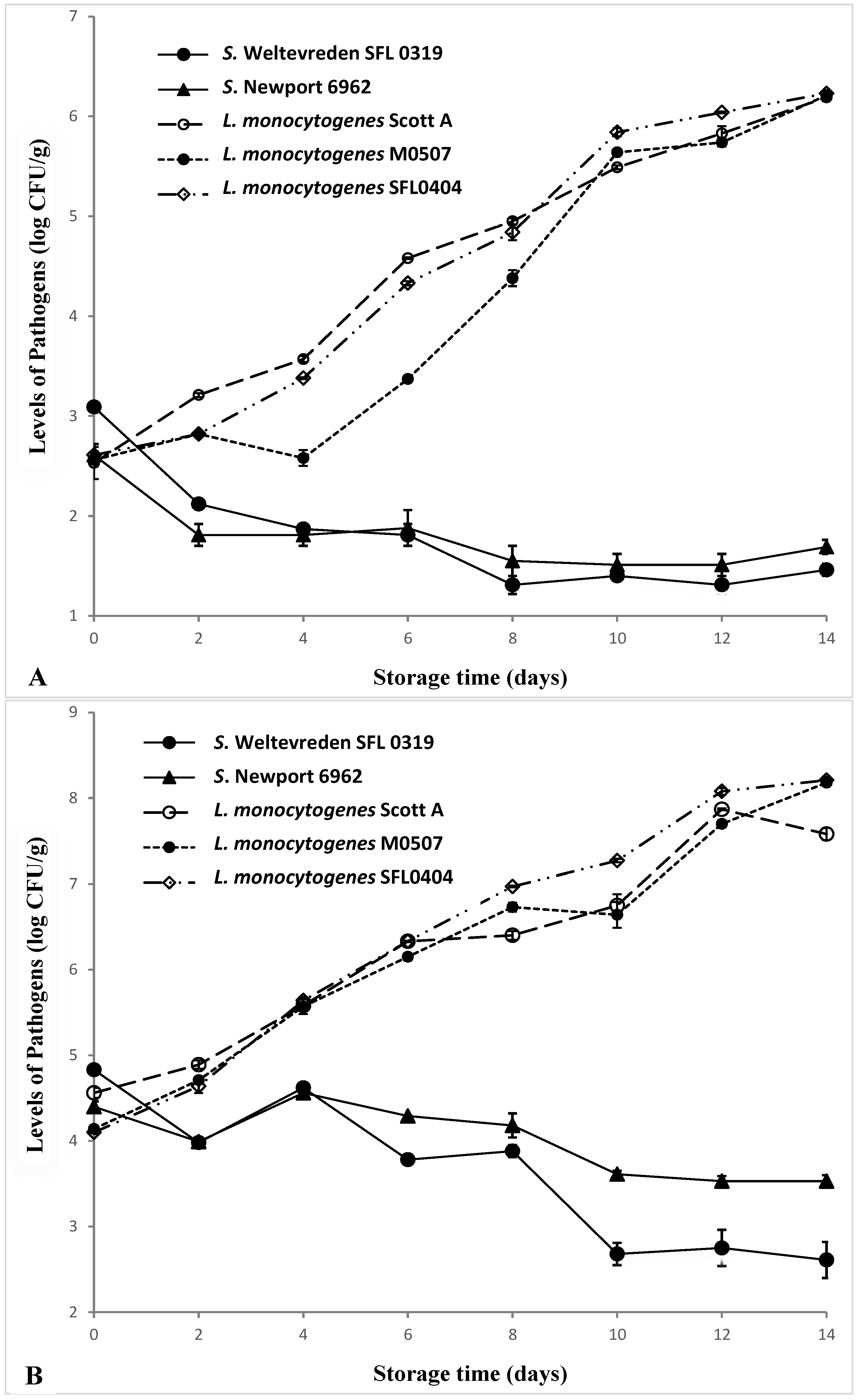 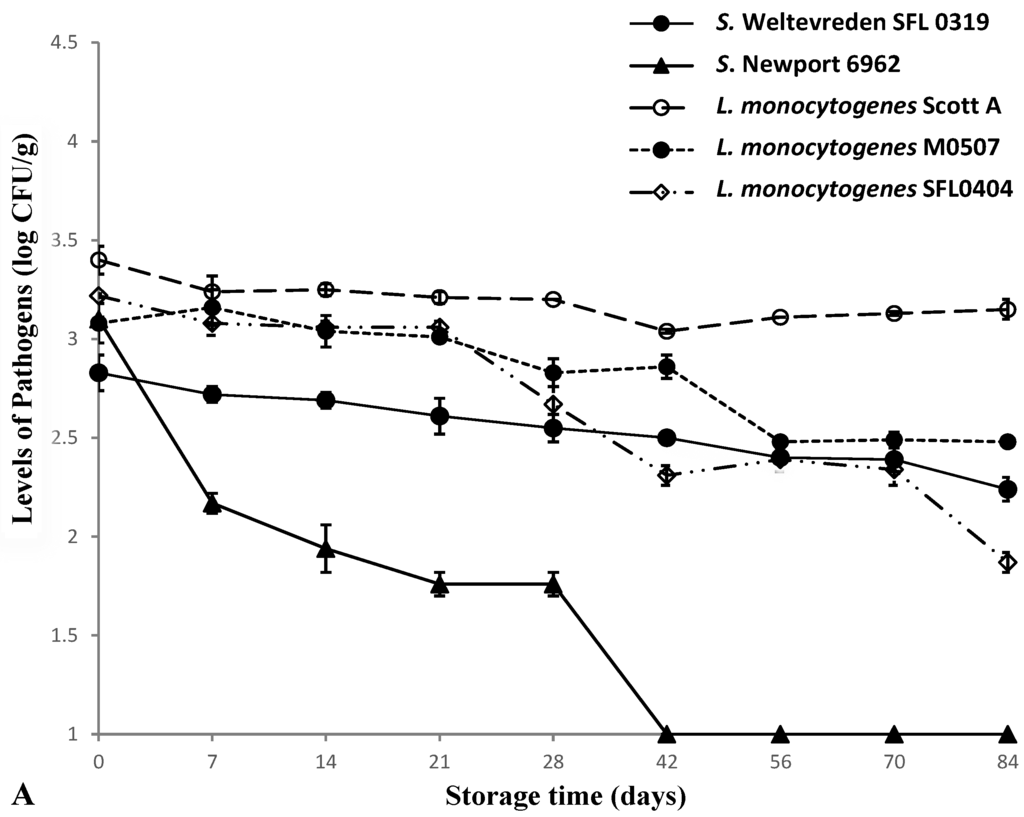 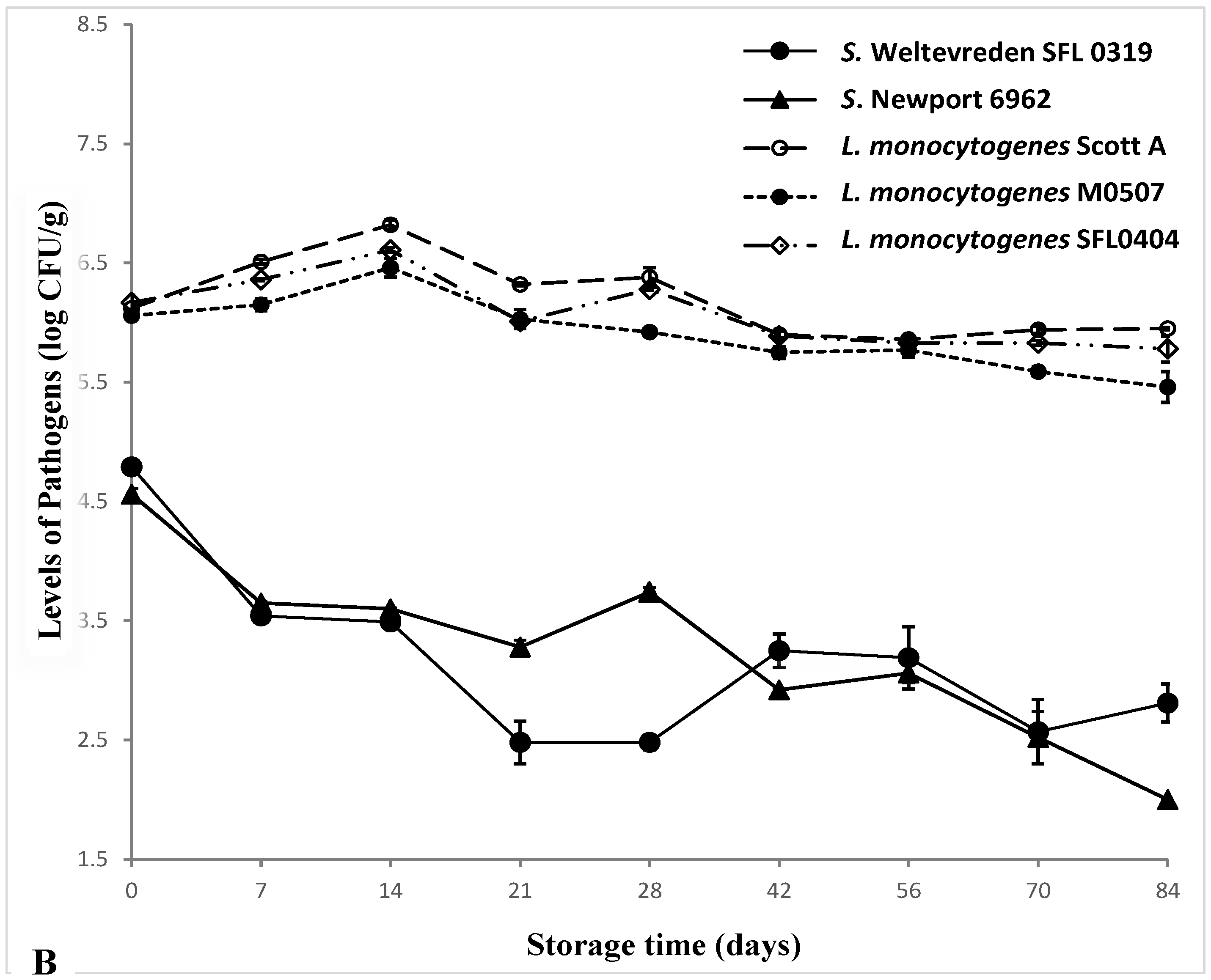