The Texture Change of Chinese Traditional Pig Trotter with Soy Sauce during Stewing Processing: Based on a Thermal Degradation Model of Collagen Fibers

Chicken meat from spent laying hens (SHs) has been considered as nutritive as the meat of commercial broilers (CBs) based on chemical composition. High insoluble collagen in SH meat might reduce protein digestibility and bio-accessibility compared to CB meat. This study aimed at comparing the in vitro protein digestibility of CB and SH cooked breast meat. In the first part, CB samples were digested using two static in vitro digestion methods and collected at different digestion points for determining the degree of hydrolysis (DH). The method providing a greater DH value was chosen for comparing protein digestibility between CB and SH samples. The activities of used enzymes during in vitro digestion were evaluated based on bicinchoninic acid assay 2,4,6-trinitrobenzenesulfonic acid colorimetric method, gas chromatography-mass spectrometry, and sodium dodecyl sulfate-polyacrylamide electrophoresis. Particle size distribution of solid content collected from hydrolysate was also determined. The results showed that after digestion, CB showed 1–3 mg/mL protein concentration lower, while 7–13% DH and 50–96 µmoL/g protein-free NH2 groups higher when compared to those of SH. Based on sodium dodecyl sulfate-polyacrylamide electrophoresis, CB samples exhibited greater intensity of band at MW < 15 kDa than that of SH. Regarding particle size in terms of volume weighted mean (D[4,3]), at the end of the oral phase, the end of the gastric phase, and the beginning of the intestinal phase, D[4,3] of the SH samples were 133.17 ± 2.16, 46.52 ± 2.20, and 112.96 ± 3.63 µm, respectively, which were greater than those of CB (53.28 ± 1.23, 35.59 ± 1.19, and 51.68 ± 1.25 µm). However, at the end of the intestinal phase, D[4,3] of SH and CB, which were 17.19 ± 1.69 and 17.52 ± 2.46 µm, respectively, did not significantly differ from each other. The findings suggested a greater in vitro protein digestibility of cooked CB breast meats than that of SH ones. View Full-Text
Keywords: in vitro digestion; protein digestibility; GC-MS; particle size; commercial broiler; spent laying hen in vitro digestion; protein digestibility; GC-MS; particle size; commercial broiler; spent laying hen
►▼ Show Figures 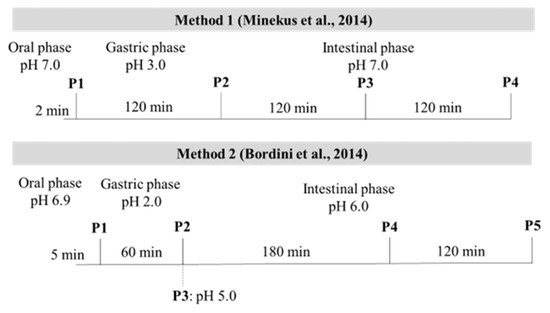