Methods for purifying, detecting, and characterizing protein concentrate, carbohydrates, lipids, and neutral fats from the microalgae were developed as a result of research. Microalgae were collected from natural sources (water, sand, soil of the Kaliningrad region, Russia). Microalgae were identified based on morphology and polymerase chain reaction as Chlorella vulgaris Beijer, Arthrospira platensis Gomont, Arthrospira platensis (Nordst.) Geitl., and Dunaliella salina Teod. The protein content in all microalgae samples was determined using a spectrophotometer. The extracts were dried by spray freeze drying. Pressure acid hydrolysis with 1% sulfuric acid was determined to be the most effective method for extracting carbohydrates from microalgae biomass samples. The highest yield of carbohydrates (more than 56%) was obtained from A. platensis samples. The addition of carbohydrates to the cultivation medium increased the accumulation of fatty acids in microalgae, especially in Chlorella. When carbohydrates were introduced to nutrient media, neutral lipids increased by 10.9%, triacylglycerides by 10.9%, fatty acids by 13.9%, polar lipids by 3.1%, unsaponifiable substances by 13.1%, chlorophyllides by 12.1%, other impurities by 8.9% on average for all microalgae. It was demonstrated that on average the content of myristic acid increased by 10.8%, palmitic acid by 10.4%, oleic acid by 10.0%, stearic acid by 10.1%, and linoleic acid by 5.7% in all microalgae samples with the addition of carbohydrates to nutrient media. It was established that microalgae samples contained valuable components (proteins, carbohydrates, lipids, fatty acids, minerals). Thereby the study of the composition of lipids and fatty acids in microalgae, as well as the influence of carbohydrates in the nutrient medium on lipid accumulation, is a promising direction for scientific research in the fields of physiology, biochemistry, biophysics, genetics, space biology and feed additive production. View Full-Text
Keywords: microalgae; proteins; carbohydrates; lipids; Chlorella; microalgae; fatty acid microalgae; proteins; carbohydrates; lipids; Chlorella; microalgae; fatty acid
►▼ Show Figures 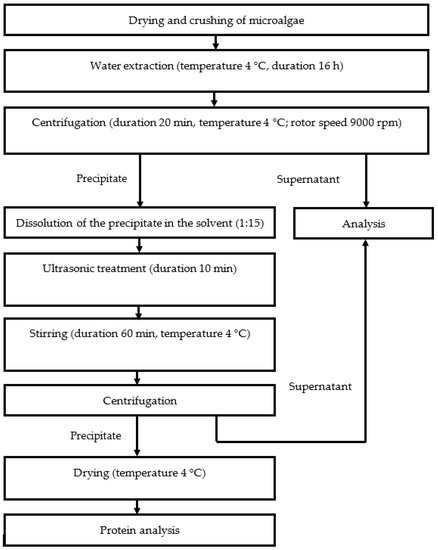