The Application of Pureed Butter Beans and a Combination of Inulin and Rebaudioside A for the Replacement of Fat and Sucrose in Sponge Cake: Sensory and Physicochemical Analysis
Next Article in Special Issue

The purpose of this study was to evaluate the immune-enhancing effect of red gamju fermented with Levilactobacillus brevis KU15154, isolated from kimchi, as a biofunctional beverage using mice. Thirty-two mice were used, and after a 2-week feeding, the growth, cytokine and immunoglobulin production, and immune-related cell activation (phagocytes and natural killer [NK] cells) of the mice were evaluated. The red gamju- (SR) and fermented red gamju- (FSR) treated groups had 3.5–4.0-fold greater T-cell proliferation ability than the negative control group. IFN-γ production in the FSR group (15.5 ± 1.2 mg/mL) was significantly higher (p < 0.05) than that in the SR group (12.5 ± 1.8 mg/mL). The FSR group (502.6 ± 25.8 μg/mL) also showed higher IgG production levels than the SR group (412.2 ± 44.8 μg/mL). The activity of NK cells treated with FSR was also greater than that of cells treated with SR but it was not significant (p ≤ 0.05). Further, the phagocytic activity of peritoneal macrophages was higher in both SR and FSR groups than in the control group but was not significantly different (p < 0.05) between the SR and FSR groups. In conclusion, L. brevis KU15154 may be applied in the fermentation of bioactive food products, such as beverages or pharmaceutical industries, to potentially improve immunity. View Full-Text
Keywords: Levilactobacillus brevis; immune-enhancing activity; gamju; lactic acid bacteria; cytokine Levilactobacillus brevis; immune-enhancing activity; gamju; lactic acid bacteria; cytokine
►▼ Show Figures 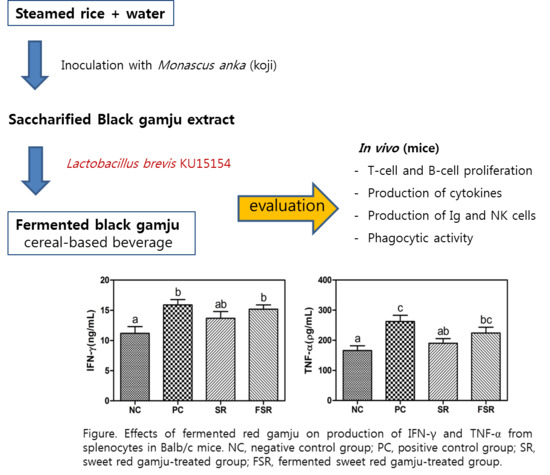