Planning for Academic Publishing after Retirement
Previous Article in Journal

A Correlation Analysis of Normalized Indicators of Citation

A Bibliometric Analysis of Cannabis Publications: Six Decades of Research and a Gap on Studies with the Plant

In this study we performed a bibliometric analysis focusing on the general patterns of scientific publications about Cannabis, revealing their trends and limitations. Publications related to Cannabis, released from 1960 to 2017, were retrieved from the Scopus database using six search terms. The search term “Genetics” returned 53.4% of publications, while “forensic genetics” and “traceability” represented 2.3% and 0.1% of the publications, respectively. However, 43.1% of the studies were not directly related to Cannabis and, in some cases, Cannabis was just used as an example in the text. A significant increase in publications was observed after 2001, with most of the publications coming from Europe, followed by North America. Although the term Cannabis was found in the title, abstract, or keywords of 1284 publications, we detected a historical gap in studies on Cannabis. We expect that increasing interest in this issue and the rise of new biotechnological advances will lead to the development of new studies. This study will help scientists identify overall research needs, detect the scientific areas in evidence concerning Cannabis studies, and find excellent centers of investigation for scientific interchange and collaboration.
Keywords: biotechnological advances; forensic science; hemp; genetics; marijuana; traceability biotechnological advances; forensic science; hemp; genetics; marijuana; traceability

Cannabis sativa L. is the most cultivated, trafficked, and consumed illicit drug in the world [1,2]. The United Nations classifies cannabis as all drugs derived from the plant Cannabis sativa (Cannabaceae) containing the substance ∆-9-tetrahydrocannabinol (THC). THC is the intoxicant compound of the plant and is responsible for the classification of C. sativa as an illicit drug. The plant also produces the cannabidiol (CBD), a compound that has been studied for pharmaceutical and medical purposes.
Aiming to increase the concentration of THC in the plant, several artificial hybrids such as “Royal AK47,” “Sharksbreath,” “Black Widow,” “Haze Prata,” “Kali Mist,” and “Jack the Ripper” have been developed through genetic selection and breeding of C. sativa [3,4,5]. On the other hand, varieties such as “Cheungsam” were developed aiming at a THC/CBD ratio that is lower than 1.0 for the medicinal use of Cannabis [6], while strains such as “Félina 34,” “Futura 77,” “Kompolti,” and “Carmagnola” were developed for cultivation aiming at the production of fibers [7]. Since the morphological differentiation among all those varieties is very difficult, genetic strategies are necessary for their characterization with forensic purposes.
Forensic genetics arose as a result of the union between legal medicine and criminalistics and is most commonly linked to the use of human DNA in criminal investigations. However, the evolution of our society significantly enlarged its framework, and forensic genetics now covers a much wider range of purposes, providing subsidiary evidence in investigations involving cases such as biopiracy, bioterrorism, identification of fraudulent food composition, and identification of illicit drugs [8].
Besides forensic investigations aiming to differentiate drug and non-drug varieties of Cannabis, forensic genetics can be very useful for determining the geographic origin of seeds/plants, and for identification of traffic routes and illegal plantations. Molecular markers employed for genetic studies in C. sativa have shown that it is possible to correlate the diversity of gene pools with their geographical origin [9,10,11,12], suggesting that these biotechnological tools can be used for forensic purposes.
Taking into account the social impacts of Cannabis traffic and its abuse, as well as recent advances in biotechnological methods, it should be expected that scientific studies on forensic genetics related to this species would have significantly increased in recent decades. An increased number of systematic reviews and meta-analyses about the medical and psychological effects of Cannabis have been launched recently in the specialized literature [13,14,15,16]. However, review studies focusing on the general patterns of scientific researches of this species, revealing trends and limitations are lacking. Such analysis might help scientists and students to identify overall research needs, to detect the scientific areas in evidence concerning Cannabis studies, and to find reputable research centers for scientific interchange and collaboration.
Despite the importance of Cannabis for public health and security, no review or bibliometric study about the publications on this species is available in the specialized literature. In order to fill this gap, we intended to qualitatively scrutinize the patterns of scientific publications (research articles and review papers) related to Cannabis in the last six decades. In this study, we examined the main areas of interest of the researchers studying Cannabis around the world and the existing gaps concerning the current demands of research, with particular attention to forensic genetics.

Scientific publications related to Cannabis, released from 1960 to 2017, were retrieved from the Scopus® (http://www.scopus.com) in June 2018. Scopus is a global multidisciplinary database with larger coverage compared to other online platforms such as Web of Science and the Scientific Electronic Library Online. Currently, it covers about 15,000 international peer-reviewed journals in the field of science and technology.
A previous search using the same parameters described below was also performed on Web of Science (https://clarivate.com/products/web-of-science/) and on the Scientific Electronic Library Online (SCIELO; www.scielo.org) platforms. When searching in different databases, specific contributions are usually found. However, the information returned from Web of Science and SCIELO in this study was also found in the SCOPUS results, without missing any publications, which confirms the larger coverage of the later database, as previously shown by Stefenon et al. [17].
As the information registered in SCOPUS was more complete and there were no data lost by excluding the Web of Science and SCIELO records, the study was performed using only data from the former platform. In addition, using data recorded from a single platform with such a wide coverage avoids introducing bias by including duplicated publications.
Only research articles and review papers were considered in the present study. Scientific notes and short communications reporting experimental studies were grouped into the research articles category.
The search arguments used were (i) Cannabis + Biochemical, (ii) Cannabis + Biology, (iii) Cannabis + Forensic genetics, (iv) Cannabis + Genetics, (v) Cannabis + Molecular markers and (vi) Cannabis + Traceability. Using the generic name as search argument allowed us to assess publications about any of the species/sub-species, as well as their hybrids. The search was performed in the fields “Article title,” “Abstract,” and “Keywords.” Since the search considers just the presence of the argument, and not its meaning, all recorded publications were individually checked in order to exclude studies unrelated to the topic.

The results were divided into six decades (1961–1970, 1971–1980, 1981–1990, 1991–2000, 2001–2010, and 2011–2017), by type of publication (research article or review paper), knowledge area (25 different areas according to the SCOPUS classification), and country of origin of the corresponding author.
The evolution in the number of publications was determined through the absolute number of publications and by computing the relative growth rate as RGR = (lnN2 − lnN1)/(t2 − t1), where N2 and N1 are the cumulative number of publications in the years t2 and t1, respectively [18]. Graphics and statistical computations were performed using Microsoft Excel® spreadsheet software.

Titles, abstracts, and objectives of the publications identified by the Scopus platform, as related to the search arguments, were independently screened and the data were summarized by two authors (C.B.D.M. and V.M.S.). The inclusion criteria were: (i) the organism related in the study, (ii) use for studies in Cannabis, and (iii) the principal focus for the study. Differences were resolved by discussion and consultation with a third author (R.P.M.L.).

3.1. Overall Results in the Scopus Platform

3.2. Variation in Results after Individual Screening

After analyzing the 1284 abstracts, or complete work when there was no abstract available on the platform, only 749 (58.3%) of the works identified by the Scopus were directly related to the Cannabis plant. The remaining works were mostly related to diseases, especially schizophrenia and HIV, where it was mentioned at some point in the abstract that drug use such as Cannabis could influence the clinical picture. Some studies reported works with illicit drugs, mainly opioids, and alcohol dependence, where the term Cannabis was cited as an example of a narcotic.
A general categorization of the studies involving Cannabis is shown in Figure 3. Using three main categories (plant, humans, and animals), the largest number of publications found was directly involving humans (56.3% of the studies), mainly studies describing the effects of the drug on the body and its chemical dependence (54.3%).
Plant studies accounted for 34.3% of the selected works, with an emphasis on studies about species and variety differentiation (13.6%) as well as for biofuel, biopolymers, and fiber or oil production (13.2%).
For the keywords “Forensic genetics,” “Molecular markers,” and “Traceability,” the studies involving only the Cannabis plant were much more common than the studies involving animals and humans (92.3% for forensic genetics, 58.1% for molecular markers, and 100% for traceability). A category analysis showed that the studies returned using the keyword “Biochemical” involving plants and animals had similar results, with 58 and 59 works, respectively (Figure S2).

The following are available online at https://www.mdpi.com/2304-6775/6/4/40/s1. Figure S1: Absolute number of publications on Cannabis recovered from the Scopus platform using six different search arguments for each country, grouped by continents, Figure S2: Flowchart of the scientific fields from the searched studies after the individual screening involving any keywords in this work.

This research was funded by CAPES PRO-FORENSES, grant number 25/2014.

The authors thank CAPES by the financial support and scholarships through the project “Development of a Cannabis sativa L. (marijuana) traceability system in the Brazilian territory.” 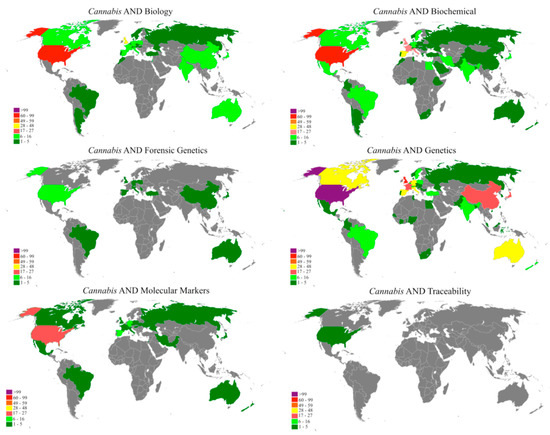