Synthesis and Reactivity of Mn–CF3 Complexes
Previous Article in Journal

The capture and storage of solar energy is a promising option to overcome current energy issues. To put such systems into practice, molecular photosensitizers should be based on abundant metals and possess a strong absorption capability for visible light. Therefore, a systematic series of four novel heteroleptic Cu(I) complexes of the type [(P^P)Cu(N^N)]+ (with P^P = xantphos and N^N = different diimine ligands) has been prepared. As an essential feature, these copper photosensitizers contain an imidazole moiety at the backbone of the diimine ligand, which increases the aromatic π-system compared to phenanthroline type ligands. Moreover, 2-(4-bromophenyl)-1-phenyl-1H-imidazo-[4,5-f][1,10]phenanthroline was used as a starting point and modular platform for gradually extended diimine ligands. Suzuki cross-coupling was applied to introduce different kind of substituents in the back of this ligand. Afterwards, a combination of NMR spectroscopy, mass spectrometry, X-ray analysis, cyclic voltammetry, UV/vis and emission spectroscopy was used to investigate the structural, electrochemical and photophysical properties of these compounds. As a result, a reversible reduction, strongly increased extinction coefficients and significantly redshifted absorption maxima (>20 nm) were found compared to traditional Cu(I) photosensitizers without an imidazo moiety. Moreover, these compounds show a bright emission in the solid state. View Full-Text
Keywords: copper photosensitizers; imidazo-phenanthroline ligands; Suzuki coupling; X-ray analysis; photophysics; structure-property relationships copper photosensitizers; imidazo-phenanthroline ligands; Suzuki coupling; X-ray analysis; photophysics; structure-property relationships
►▼ Show Figures 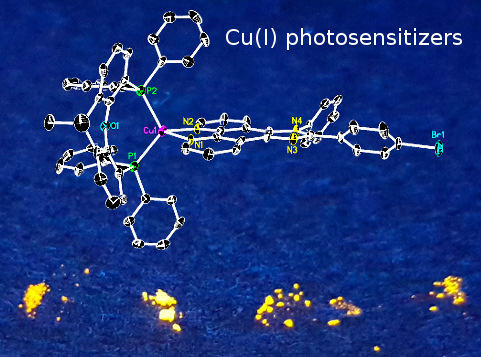