We study the transmission of electromagnetic waves through layered structures of metallic and left-handed media. Resonant band structures of transmission coefficients are obtained as functions of the incidence angle, the geometric parameters, and the number of unit cells of the superlattices. The theory of finite periodic systems that we use is free of assumptions, the finiteness of the periodic system being an essential condition. We rederive the correct recurrence relation of the Chebyshev polynomials that carry the physical information of the coherent coupling of plasmon modes and interface plasmons and surface plasmons, responsible for the photonic bands and the resonant structure of the surface plasmon polaritons. Unlike the dispersion relations of infinite periodic systems, which at best predict the bandwidths, we show that the dispersion relation of this theory predicts not only the bands, but also the resonant plasmons’ frequencies, above and below the plasma frequency. We show that, besides the strong influence of the incidence angle and the characteristic low transmission of a single conductor slab for frequencies below the plasma frequency , the coherent coupling of the bulk plasmon modes and the interface surface plasmon polaritons lead to oscillating transmission coefficients and, depending on the parity of the number of unit cells n of the superlattice, the transmission coefficient vanishes or amplifies as the conductor width increases. Similarly, the well-established transmission coefficient of a single left-handed slab, which exhibits optical antimatter effects, becomes highly resonant with superluminal effects in superlattices. We determine the space-time evolution of a wave packet through the photonic superlattice whose bandwidth becomes negligible, and the transmission coefficient becomes a sequence of isolated and equidistant peaks with negative phase times. We show that the space-time evolution of a Gaussian wave packet, with the centroid at any of these peaks, agrees with the theoretical predictions, and no violation of the causality principle occurs.
Keywords: photonics; planar metallic superlattices; plasmonic frequencies; resonant dispersion relations; parity effects in metallic superlattices; left-handed superlattices; negative tunneling times photonics; planar metallic superlattices; plasmonic frequencies; resonant dispersion relations; parity effects in metallic superlattices; left-handed superlattices; negative tunneling times

We studied the transmittance and dispersion relations of electromagnetic waves through metallic and left-handed superlattices, based on the theory of finite periodic systems briefly reviewed here. We have shown that the entire spectrum of features and effects that characterize the physics of plasmon modes and their couplings, observed in photonic crystals, are present in metallic superlattices. We have shown that the positions of the resonant bands are very sensitive to the angle of incidence . For , we found interesting oscillations, localization, as well as attenuation and amplification effects on the transmittance of plasmon modes. Preliminary results of interesting parity effects were also found. We have shown that the Kramer condition, which is nothing more than the dispersion relation derived in theories for infinite SLs, predicts at best bandwidths while the resonant dispersion relation of the TFPS predicts bandwidths and all the resonant intra-band frequencies.
We revisited the transmission coefficients and tunneling times of left-handed superlattices. We studied, particularly, the left-handed superlattice with a relation in the layers’ widths. A careful analysis of the space-time evolution shows no violation of the causality principle. In these systems, as in the metallic superlattices, the resonant dispersion relation derived in the TFPS is consistent with the resonant structure of the transmission coefficients.

In [23,35], the relation was replaced into: to write the transmission coefficient in the form: which, recalling the relation , led to:
It is clear that in this representation, the transmission coefficient is resonant with value 1 when the energy is such that becomes a zero of the Chebyshev polynomial . Since the zeros of are defined by , with = 1,2,...,, the resonant condition can be written as:
This relation was generalized in [35] to include the quantum number that labels the bands while the quantum number labels the intra-band energy levels. In terms of these quantum numbers, the dispersion relation that defines bands and the intra-band levels is:
Because of the close relation with the resonant behavior in open systems, it will be referred to as the resonant dispersion relation (RDR). Another important relation that was derived in the theory of finite periodic systems (see [32,33]) is the Landauer conductance , which in the particular case of only one propagating mode becomes:
Here, G is the conductance of a unit cell. This result is very insightful, because is written in terms of two factors, each of which has a close relation with a fundamental quantum property, the quantum tunneling and the quantum coherence, represented by G and , respectively. In the theory of finite periodic systems, the polynomial , in the multi-mode case, or the Chebyshev polynomials , in the one propagating mode limit, carry the physical information of the number of layers, n, the number of channels, N, and more importantly, of the complex interference phenomena, responsible for the band structure.

Appendix B. The Band Structure of the λ/4 SL and the RDR 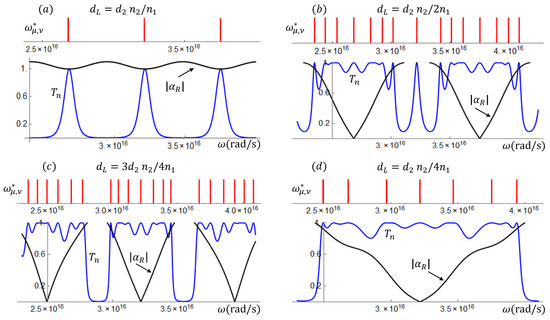 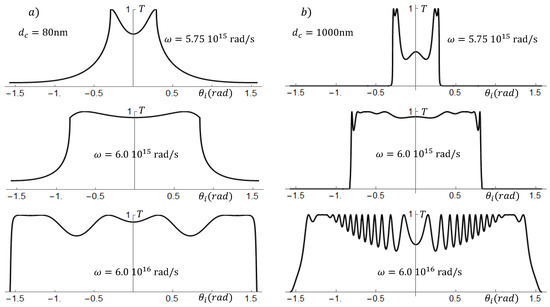 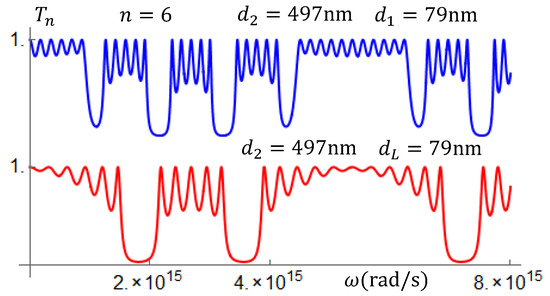 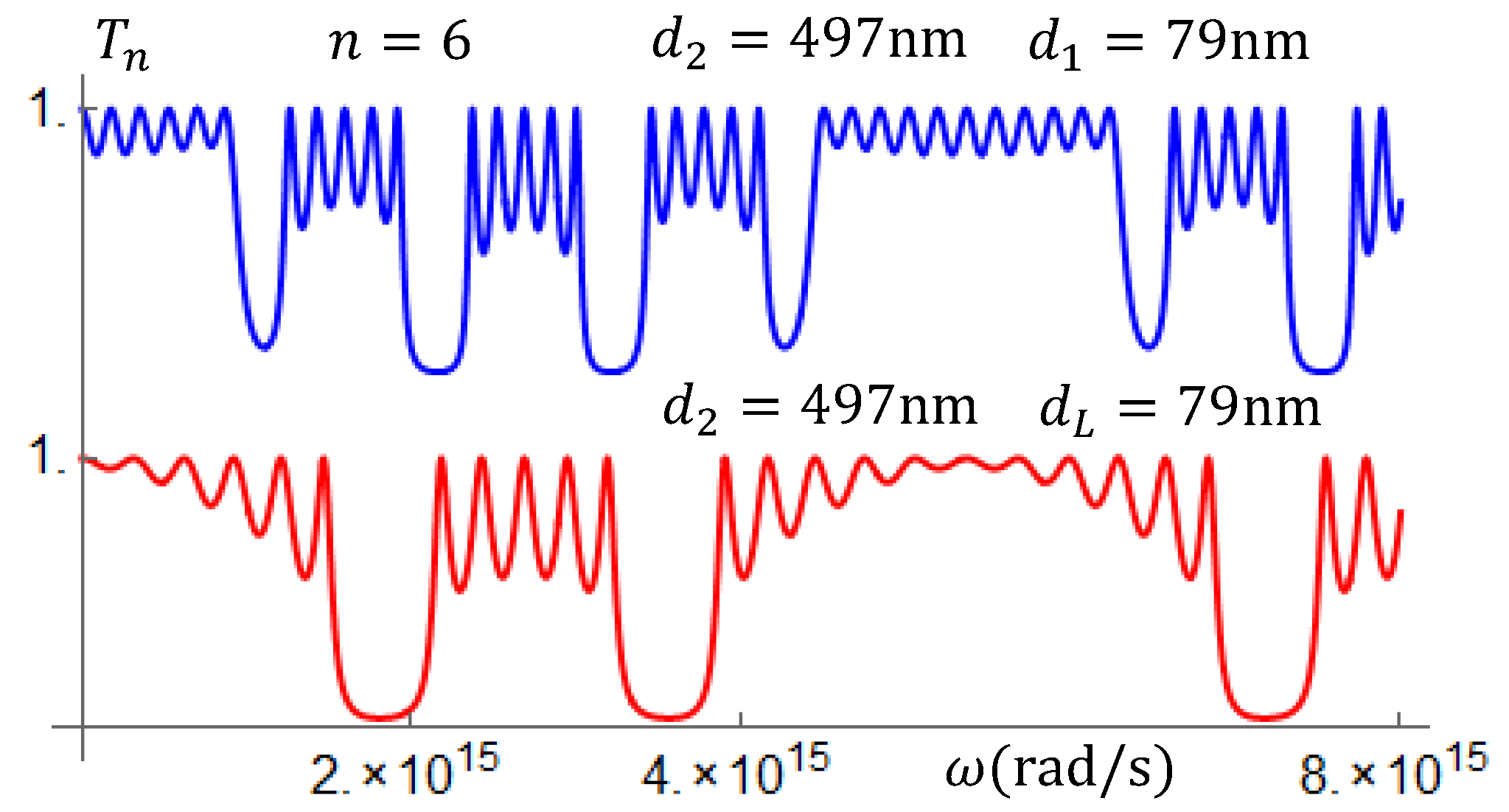 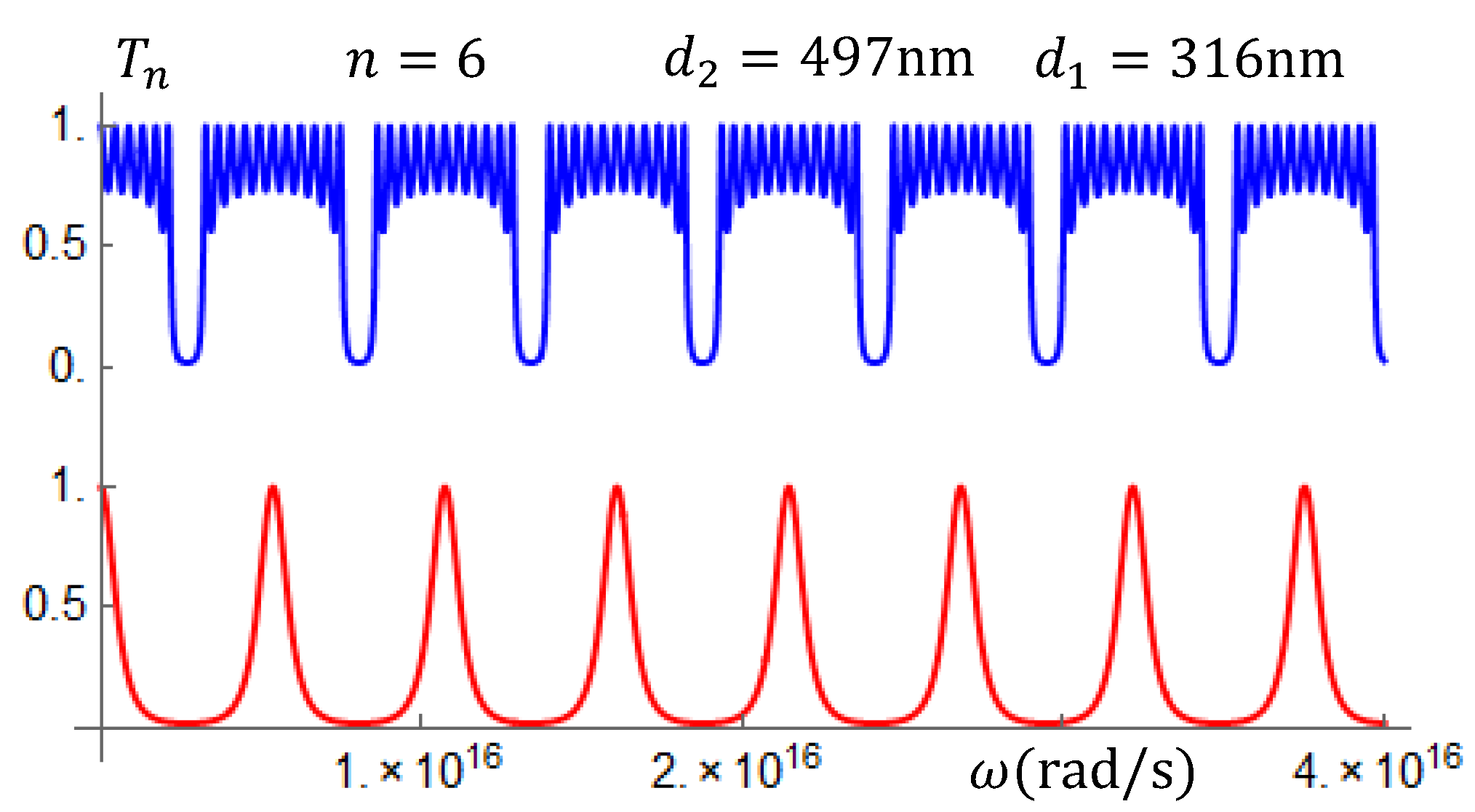 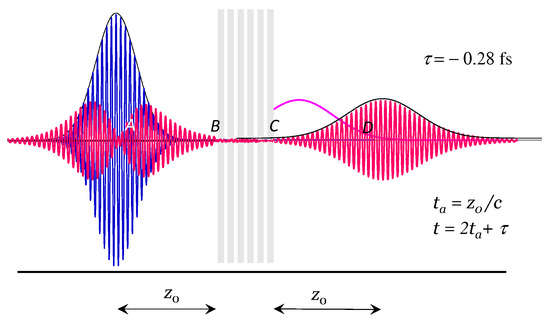