Dynamics of the MnAs α/β-Striped Microstructure and of the Fe Magnetization Reversal in Fe/MnAs/GaAs(001): An Optical-Laser Pump–Free-Electron-Laser Probe Scattering Experiment
Previous Article in Journal / Special Issue

Time resolved extreme ultraviolet (EUV) transient reflectivity measurements on non-equilibrium amorphous carbon (a-C) have been carried out by combining optical and free electron laser (FEL) sources. The EUV probing was specifically sensitive to lattice dynamics, since the EUV reflectivity is essentially unaffected by the photo-excited surface plasma. Data have been interpreted in terms of the dynamics of an expanding surface, i.e., a density gradient rapidly forming along the normal surface. This allowed us to determine the characteristic time ( 1 ps) for hydrodynamic expansion in photo-excited a-C. This finding suggests an extremely narrow time window during which the system can be assumed to be in the isochoric regime, a situation that may complicate the study of photo-induced metastable phases of carbon. Data also showed a weak dependence on the probing EUV wavelength, which was used to estimate the electronic temperature ( 0.8 eV) of the excited sample. This experimental finding compares fairly well with the results of calculations, while a comparison of our data and calculations with previous transient optical reflectivity measurements highlights the complementarities between optical and EUV probing. View Full-Text
Keywords: pump–probe; hydrodynamic expansion pump–probe; hydrodynamic expansion
►▼ Show Figures 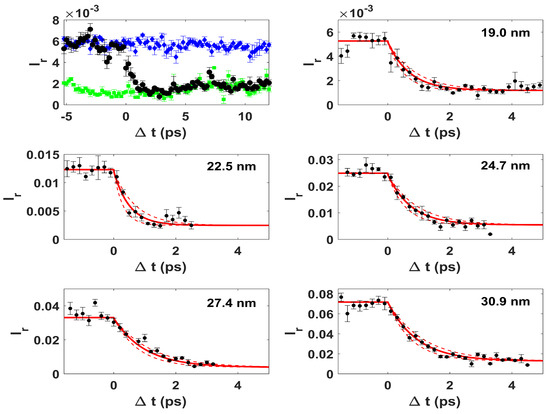