Assessment, Validation and Application to Real Samples of an RP-HPLC Method for the Determination of Guayulins A, B, C and D in Guayule Shrub

Virgin olive oil is unique among plant oils for its high levels of oleic acid, and the presence of a wide range of minor components, which are responsible for both its health-promoting properties and characteristic aroma, and only produced when olives are crushed during the industrial process used for oil production. The genetic variability of the major volatile compounds comprising the oil aroma was studied in a representative sample of olive cultivars from the World Olive Germplasm Collection (IFAPA, Cordoba, Spain), by means of the headspace solid-phase microextraction/gas chromatography–mass spectrometry–flame ionization detection (HS-SPME/GC-MS-FID). The analytical data demonstrated that a high variability is found for the content of volatile compounds in olive species, and that most of the volatile compounds found in the oils were synthesized by the enzymes included in the so-called lipoxygenase pathway. Multivariate analysis allowed the identification of cultivars that are particularly interesting, in terms of volatile composition and presumed organoleptic quality, which can be used both to identify old olive cultivars that give rise to oils with a high organoleptic quality, and in parent selection for olive breeding programs. View Full-Text
Keywords: Olea europaea L.; virgin olive oil; volatile compounds; variability; quality Olea europaea L.; virgin olive oil; volatile compounds; variability; quality
►▼ Show Figures 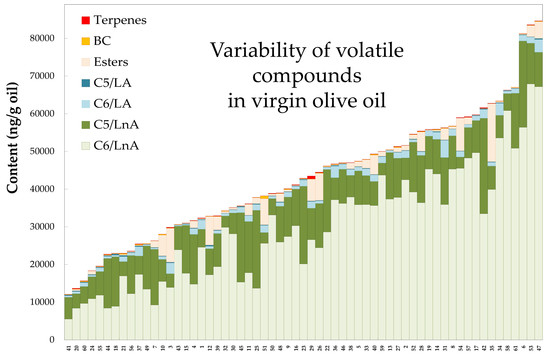