Sulfur, Phosphorus and Metals in the Stoichiometric Estimation of Biomethane and Biohydrogen Yields
Next Article in Special Issue

Many researchers have focused on multi-phase reactor development for improving mass transfer performance. However, solid particle addition in gas–liquid contactor for better oxygen mass transfer performance is still limited. Hence, this study aims to analyze the relative effect of different types of local solid media on the bubble hydrodynamic characteristics towards mass transfer enhancement in bubble columns (BCR) and airlift reactors (ALR). This was investigated by varying solid media types (ring, sphere, cylinder, and square), solid loadings (0%–15%), and superficial gas velocities (Vg) (2.6–15.3 × 10−3 m/s) in terms of the bubble hydrodynamic and oxygen mass transfer parameters. The result showed that bubble size distribution in BCR and ALR with additional plastic media was smaller than that without media addition, approximately 22%–27% and 5%–29%, respectively, due to the increase of the bubble breaking rate and the decrease of the bubble rising velocity (UB). Further, adding media in both reactors significantly decreased the UB value. Since media increased flow resistance, resulting in decreased liquid velocity, it can also be the moving bed to capture or block the bubbles from free rising. Therefore, oxygen mass transfer performance was investigated. The oxygen transfer coefficient (KLa) in BCR with solid media addition was enhanced up to 31%–56% compared to a non-addition case, while this enhancement was greater at higher solid loading due to its higher effective surface, resulting in a higher bubble break-up rate compared to the lower loading. In ALR, up to 38.5% enhanced KLa coefficient was archived after adding plastic media over the non-addition case. In conclusion, ring and cylinder media were found to be the most significant for improving KLa value in BCR and ALR, respectively, without extra energy. View Full-Text
Keywords: airlift reactor; bubble column; bubble hydrodynamic; mass transfer; solid media airlift reactor; bubble column; bubble hydrodynamic; mass transfer; solid media
►▼ Show Figures 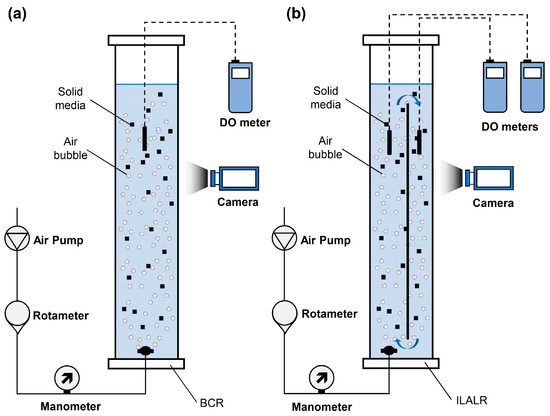