In the mobile wireless sensor network (MWSN) field, there exists an important problem—how can we quickly form an MWSN to cover a designated working area on the ground using an unmanned aerial vehicle (UAV) swarm? This problem is of significance in many military and civilian applications. In this paper, inspired by intermolecular forces, a novel molecular force field-based optimal deployment algorithm for a UAV swarm is proposed to solve this problem. A multi-rotor UAV swarm is used to carry sensors and quickly build an MWSN in a designated working area. The necessary minimum number of UAVs is determined according to the principle that the coverage area of any three UAVs has the smallest overlap. Based on the geometric properties of a convex polygon, two initialization methods are proposed to make the initial deployment more uniform, following which, the positions of all UAVs are subsequently optimized by the proposed molecular force field-based deployment algorithm. Simulation experiment results show that the proposed algorithm, when compared with three existing algorithms, can obtain the maximum coverage ratio for the designated working area thanks to the proposed initialization methods. The probability of falling into a local optimum and the computational complexity are reduced, while the convergence rate is improved. View Full-Text
Keywords: UAV swarm; MWSN; deployment algorithm; molecular force; coverage maximization UAV swarm; MWSN; deployment algorithm; molecular force; coverage maximization
►▼ Show Figures 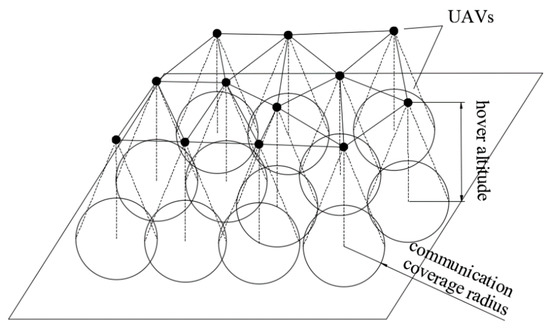