Natural gas hydrates represent a valid opportunity to counteract two of the most serious issues that are affecting humanity this century: climate change and the need for new energy sources, due to the fast and constant increase in the population worldwide. The energy that might be produced with methane contained in hydrates is greater than any amount of energy producible with known conventional energy sources; being widespread in all oceans, they would greatly reduce problems and conflicts associated with the monopoly of energy sources. The possibility of extracting methane and simultaneously performing the permanent storage of carbon dioxide makes hydrate an almost carbon-neutral energy source. The main topic of scientific research is to improve the recovery of technologies and guest species replacement strategies in order to make the use of gas hydrates economically advantageous. In the present paper, an experimental study on how salt can alter the formation process of both methane and carbon dioxide hydrate was carried out. The pressure–temperature conditions existing between the two respective equilibrium curves are directly proportional to the effectiveness of the replacement process and thus its feasibility. Eighteen formation tests were realized at three different salinity values: 0, 30 and 37 g/L. Results show that, as the salinity degree increases, the space between CO2 and CH4 formation curves grows. A further aspect highlighted by the tests is how the carbon dioxide formation process tends to assume a very similar trend in all experiments, while curves obtained during methane tests show a similar trend but with some significant differences. Moreover, this tendency became more pronounced with the increase in the salinity degree. View Full-Text
Keywords: gas hydrate; methane; CO2 replacement; production and reservoirs gas hydrate; methane; CO2 replacement; production and reservoirs
►▼ Show Figures 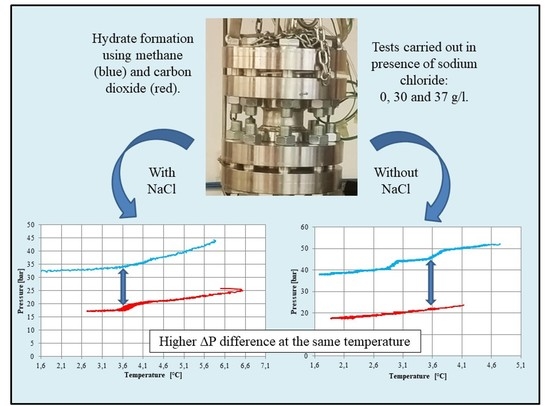