Influence of Carbon Nanosheets on the Behavior of 1,2-Dipalmitoyl-sn-glycerol-3-phosphocholine Langmuir Monolayers
Previous Article in Special Issue

:
This paper investigated the magnetohydrodynamic (MHD) mixed convection flow of Fe3O4-water ferrofluid over a nonlinearly moving surface. The present work focused on how the state of suction on the surface of the moving sheet and the effects of thermal radiation influence the fluid flow and heat transfer characteristics within the stagnation region. As such, a similarity solution is engaged to transform the governing partial differential equations to the ordinary differential equations. A collocation method, namely the bvp4c function in the MATLAB software solves the reduced system, numerically. Two different numerical solutions were identified for the cases of assisting and opposing flows. The stability analysis was conducted to test the stability of the non-uniqueness solutions. The increment of the thermal radiation effect affects the rate of heat transfer to decrease. The stability analysis conveyed that the upper branch solution is stable and vice versa for the other solution.
Keywords:
ferrofluid; MHD; mixed convection; dual solution; stability analysis; thermal radiation

2. Formulation of the Problem

The present work deliberated the steady, two-dimensional mixed convection flow and heat transfer of a viscous and incompressible electrically conducting fluid over a penetrable nonlinearly stretching/shrinking sheet. The sheet was positioned vertically. The flow geometry is schematically displayed in Figure 1. The fluid refers to the water-based ferrofluid, which consisted of magnetite (Fe3O4) nanoparticles. The flow was under the effects of thermal radiation and a transverse magnetic field of strength B, which was assumed for application in the positive y-direction normal to the sheet. In view of the current study, it was assumed that the induced magnetic field was negligible. Besides, it was also assumed that the velocity of the flow external to the boundary layer was , the velocity of the wall mass flux was , the temperature of the sheet was , and the ambient temperature was . Furthermore, the sheet was assumed to stretch/shrink continuously in the x-direction with a velocity of .
Under these assumptions, along with the Boussinesq and the boundary layer approximations, the governing partial differential equations of the problem were given as below (Shen et al. [27] and Tiwari and Das [28]): subject to the boundary conditions: where u and v represent the velocity components along the x and y directions, respectively, g is the acceleration due to gravity, refers to the magnetic field, T denotes the temperature of the ferrofluid, reflects the radiation heat flux, denotes the kinematic viscosity of the ferrofluid, is the electrical conductivity of the ferrofluid, refers to the density of the ferrofluid, reflects the thermal expansion coefficient of the ferrofluid, denotes the thermal diffusivity of the ferrofluid, represents the dynamic viscosity of the ferrofluid, as described in the Brinkman’s model, and lastly, represents the heat capacitance of the ferrofluid. The effective properties of the ferrofluid are further described in the following (see [39,40]): where signifies the base fluid’s dynamic viscosity, connotes the nanoparticle solid volume fraction, and symbolize the density of the base fluid and the solid nanoparticle, respectively, is the ferrofluid thermal conductivity, where the subscript ‘f’ represent the base fluid while ‘s’ denotes the nanoparticle.
Next, applying the Rosseland’s approximation, the radiation heat flux, , possesses the following form given by: where is the Stefan–Boltzmann constant and denotes the Rosseland mean spectral absorption coefficient. The differences in the temperature within the flow vicinity are assumed to be , which can be expanded in a Taylor’s series as a linear combination of the temperature. Upon expanding into the Taylor’s series for , it was approximated after neglecting the higher order terms, yielding . Thus, Equation (3) is reduced as:
Next, in order to obtain the similarity solutions of the governing Equations (1), (2) and (7), which are subjected to the boundary conditions (4), expressions , , , , and are presented in the following form:
Here, a and b are constants, is the characteristic magnetic field, n functions as the positive constant, s is the suction parameter, and is the constant characteristic temperature, with signifying a cooled surface (opposing flow) and corresponding to a heated surface (assisting flow).
In this study, the similarity transformation is defined as follows (Shen et al. [27]):
The substitution of Equation (9) into Equations (2) and (7) provides: while the boundary conditions (4) turned to be as follows: where M is the magnetic parameter, refers to the mixed convection parameter, with represents the opposing flow, whereas represents the assisting flow, Pr refers to the Prandtl number, Nr is the thermal radiation parameter, c is the stretching/shrinking parameter, with refers to the stretching sheet and refers to the shrinking sheet, and s is the constant mass flux parameter with s > 0 refers to the suction and s < 0 refers to the injection. The governing parameters M, , Pr, Nr, s, and c can be defined as follows: where the local Grashof number, , and the local Reynolds number, , are defined as:
The physical quantities of practical interest are the skin friction coefficient, , and the local Nusselt number, , defined as follows: where is the wall shear stress and denotes the heat flux, given by:
Substituting Equation (9) into Equations (15) and (16), yields:

The numerical outcomes of the similar Equations (10)–(12) implied the occurrence of two solution branches for the variation of respective governing parameters. Therefore, the stability of the non-uniqueness solutions was tested. The stability of the dual solutions was examined by applying the scheme, as suggested by Merkin [41], Weidman et al. [42], and Harris et al. [43]. The stability analysis was initiated by considering an unsteady problem. Hence, Equation (1) was retained, and Equations (2) and (7) were formed as: where t denotes the time. In conjunction with the similarity solutions (Equation (9)), the subsequent new similarity transformation was formed:
Thus, Equations (18) and (19) were written as given: subject to:
Following from there, to determine the stability of the dual solutions, Weidman et al. [43] was adhered to as follows: where is an unknown eigenvalue parameter adopted to determine the linear stability of the flow. Here, and satisfies the similarity of Equations (10)–(12). Besides, it is worth noting that , , and all its derivatives are smaller in comparison with , and all its derivatives. Hence, by employing the time-dependent solutions of Equation (24) into Equations (21) and (22), the following expressions can be attained: subject to:
In this study, to determine the early growth or decay of the solutions (Equation (24)), we considered [43], which yields and Then, the following linearized eigenvalue problem was resolved via the collocation method: accompanied with:
It is noteworthy to mention here that the solutions of and are from the similarity Equations (10)–(12). Once the results were obtained, and were employed again into Equations (28) and (29), and Equations (28)–(30) were solved. Moreover, the numerical outcome of the model Equations (28)–(30) portrays an endless sequence of eigenvalues , where denotes the smallest eigenvalue. A negative implies the early development interruption, which explains the unstable situation in the laminar flow. Apart from that, a positive predicts a primary deterioration of interruptions that guarantees a stable laminar flow.

The current study reported the mathematical solutions for the problem of MHD mixed convection stagnation-point flow towards a nonlinearly moving sheet that was positioned vertically. The sheet was permeable, and Fe3O4-water ferrofluid was used as the interacting fluid. The collocation method, namely bvp4c function in the MATLAB software, was employed to solve the model in the form of ordinary differential equations. Dual solutions, which are categories of the upper branch solution and the lower branch solutions, were observable as the governing parameter was varied. As a result, several significant observations of this study can be recapitulated as follows:

A.J.; K.N.; R.N. and I.P. modelled the problem, numerically computed results, discussed the results, computed the tabulated results, wrote the manuscript and proofread it. All authors have read and agreed to the published version of the manuscript.

The authors are thankful to the honourable reviewers for their constructive suggestions to improve the quality of the paper. The authors from the Universiti Kebangsaan Malaysia would like to acknowledge the research university grant from the Universiti Kebangsaan Malaysia (project code: DIP-2017-009) and the author from the Babeş–Bolyai University would like to express his sincere thanks to the Unitatea Executiva pentru Fnantarea Invatamantului Superior, a Cercetarii, Dezvoltarii si Inovarii (UEFISCDI), Romania for funding this research work from the grant PN-III-P4-ID-PCE-2016-0036. 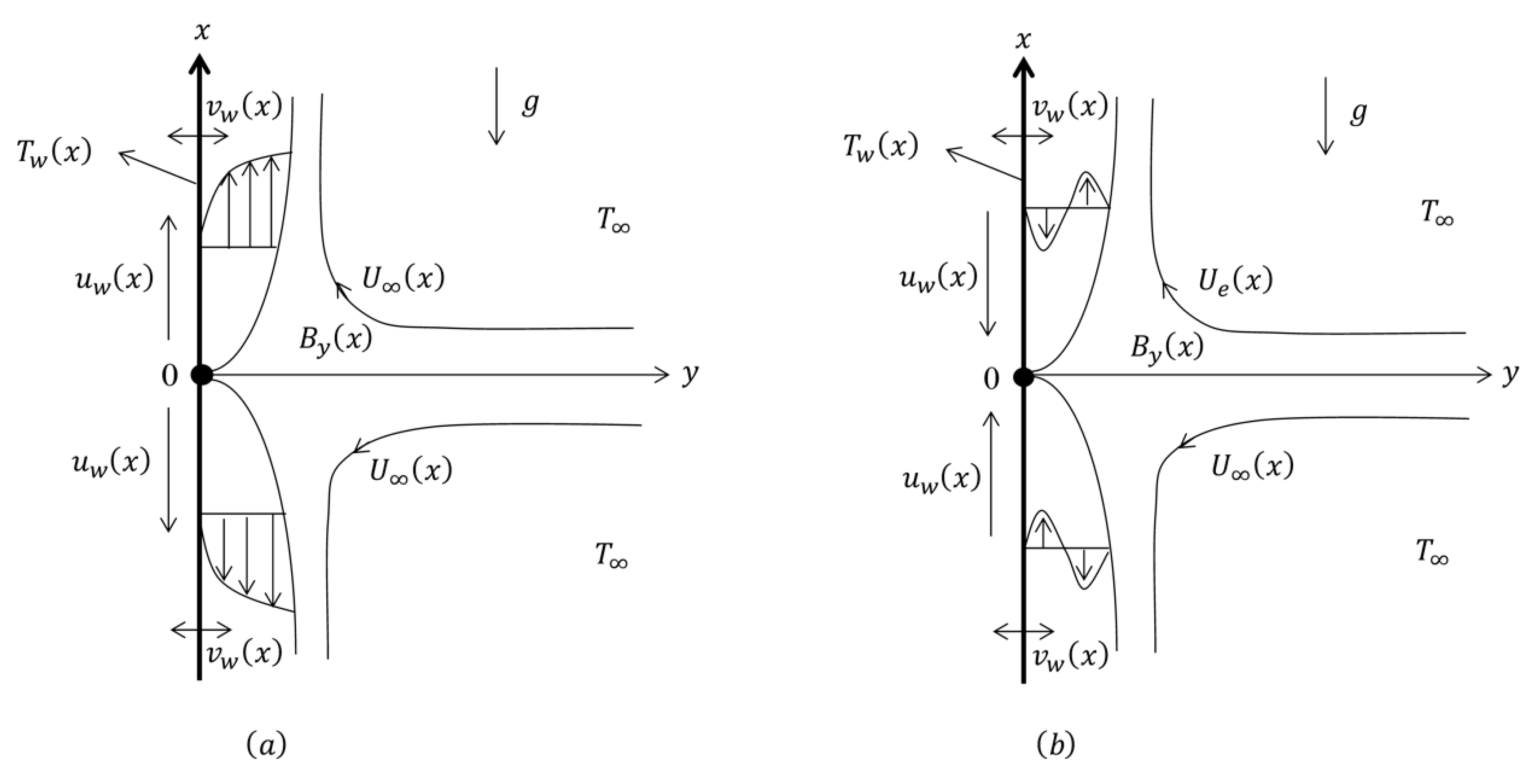 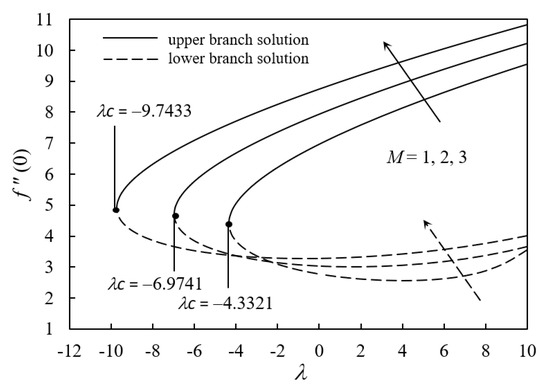 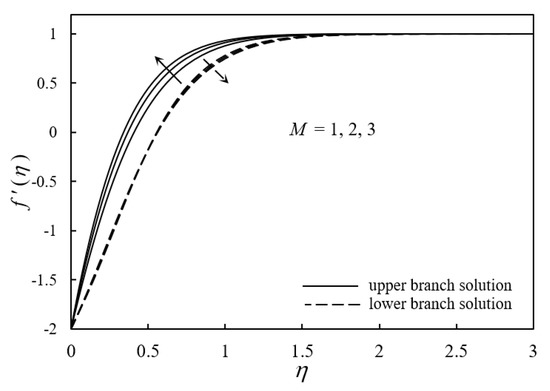 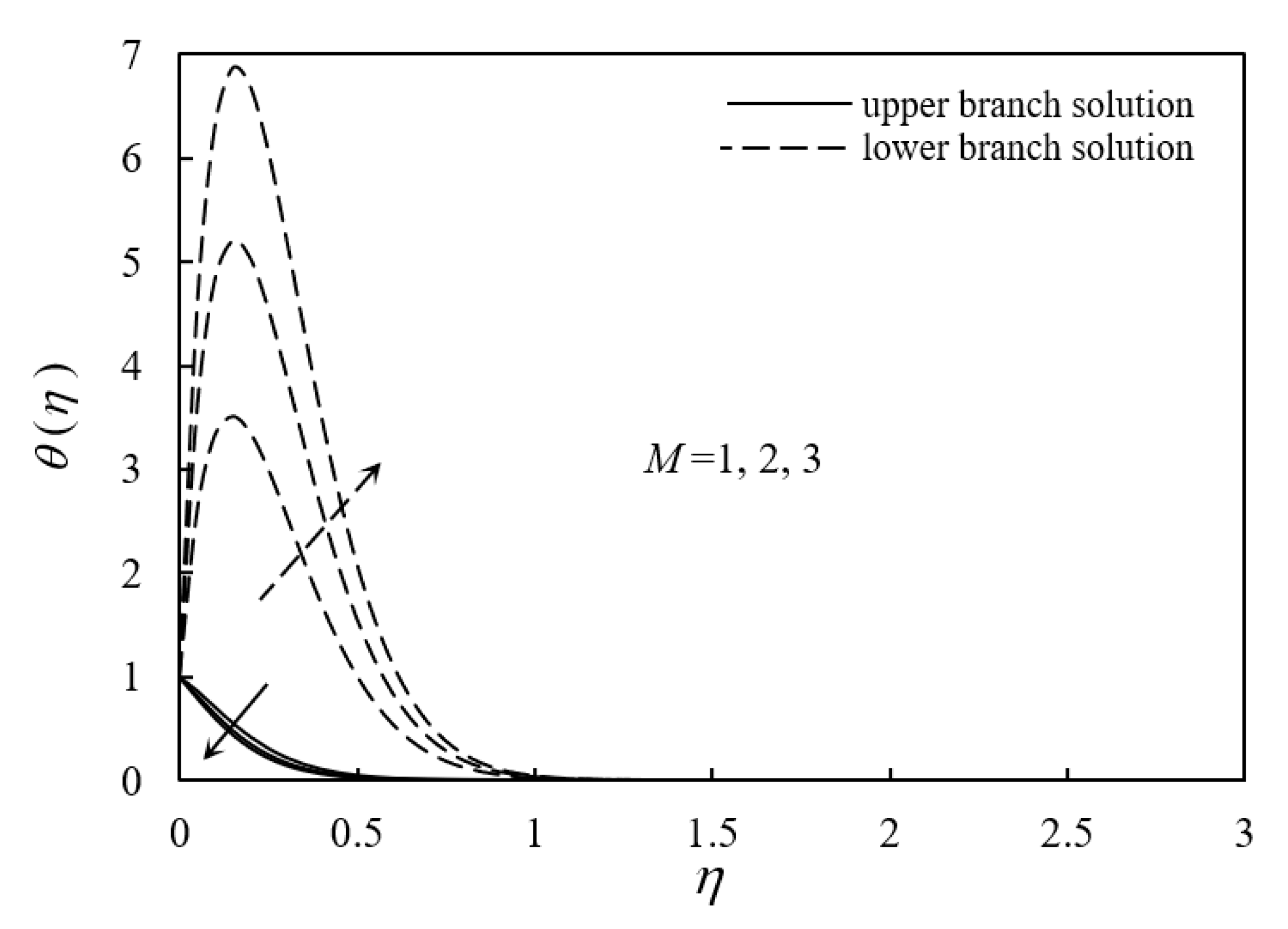 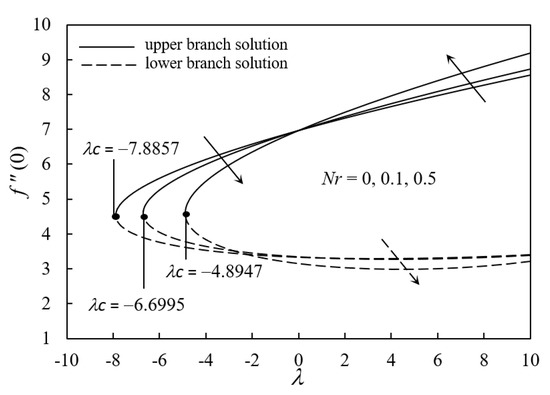 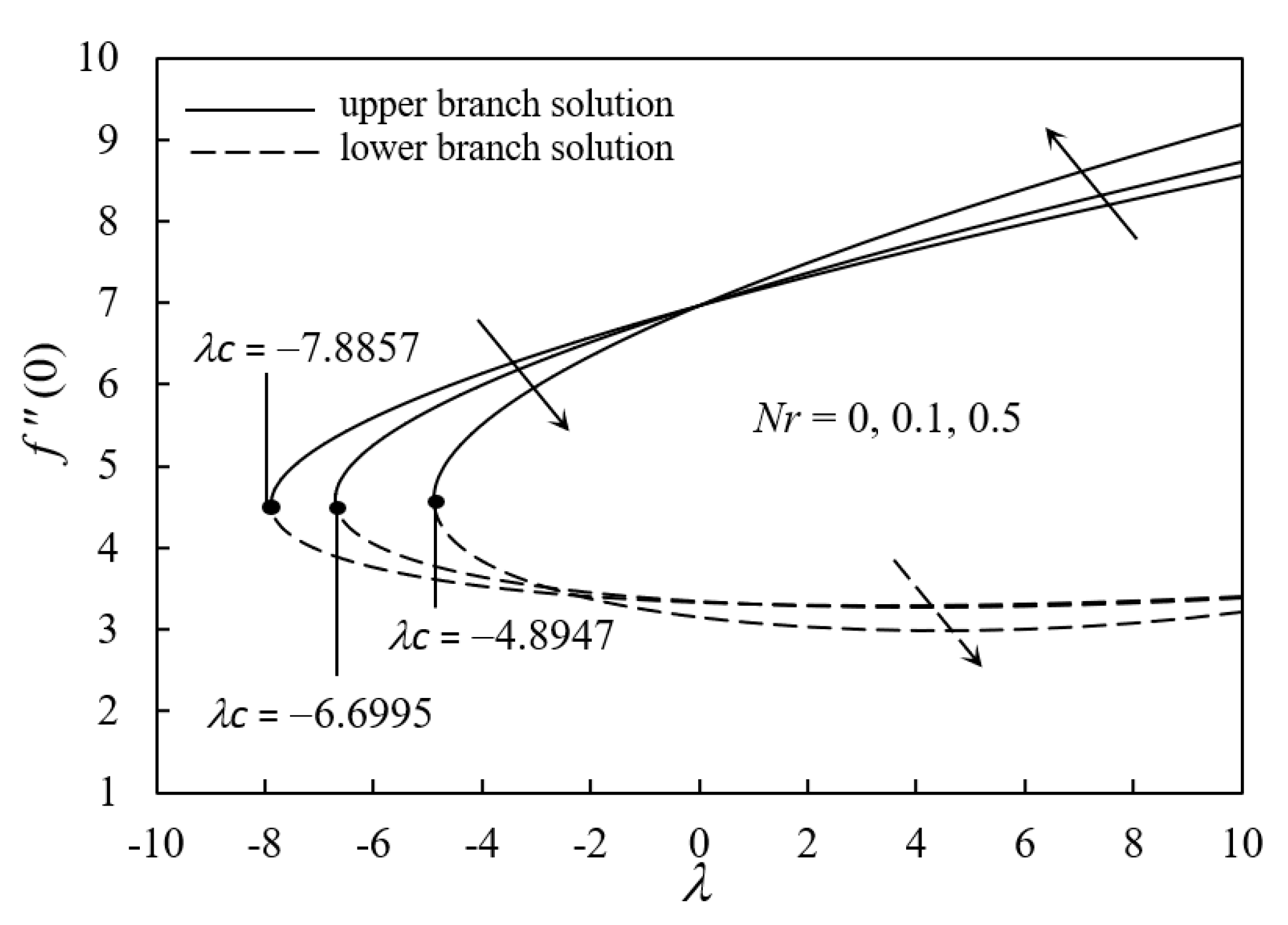 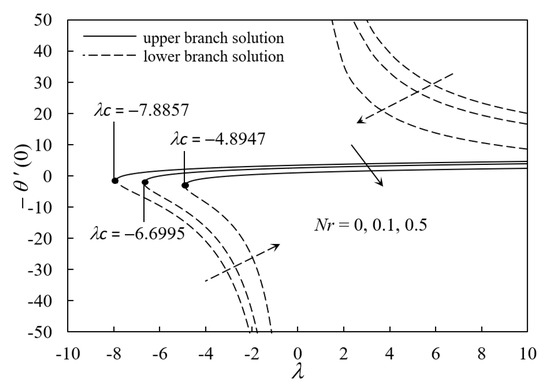 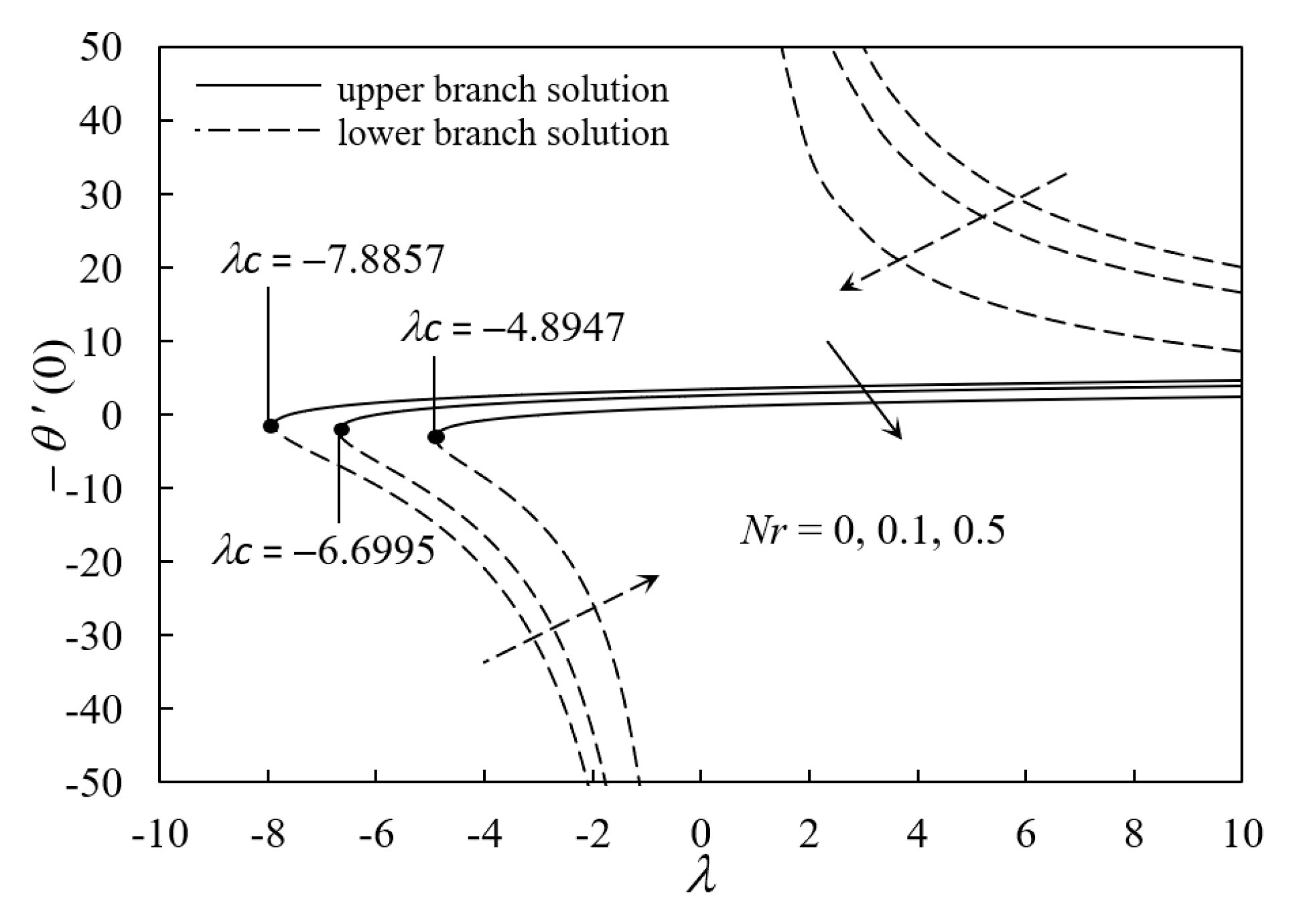 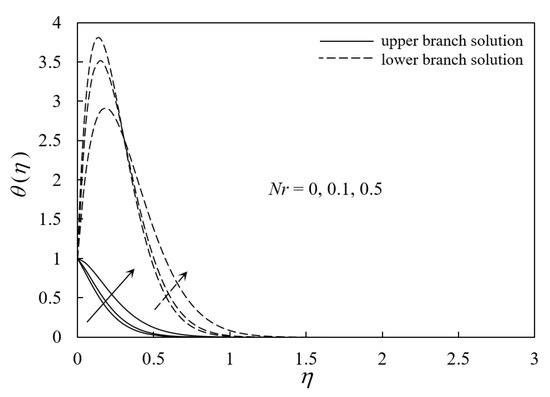 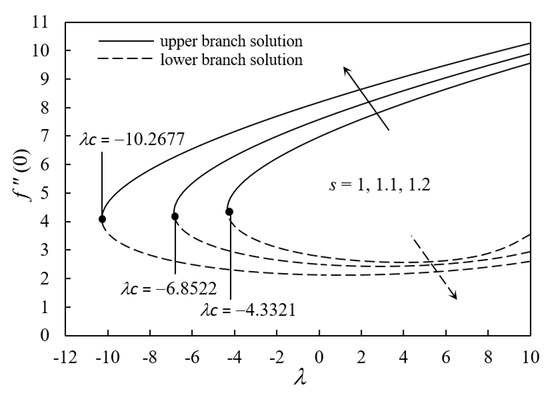 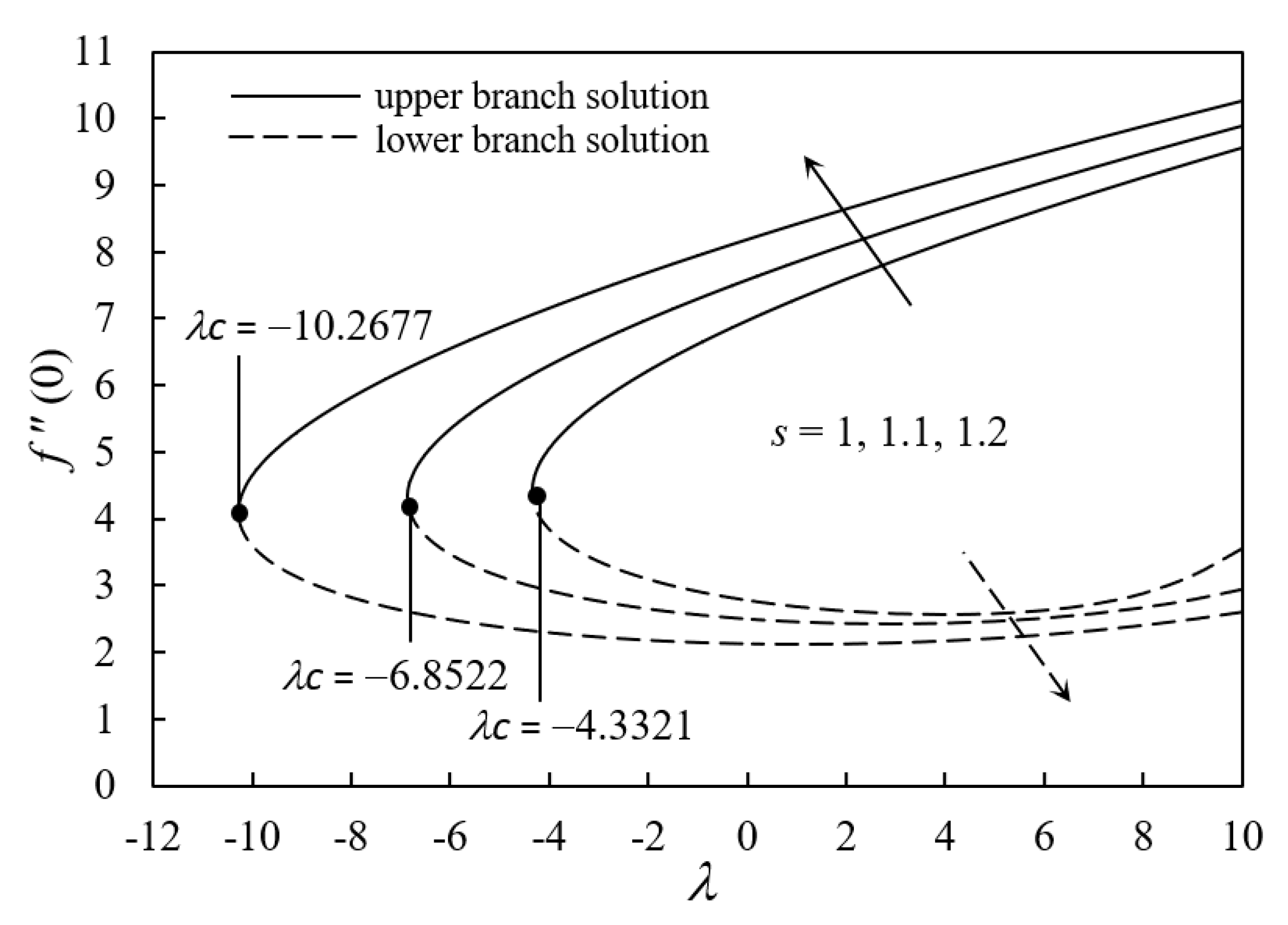 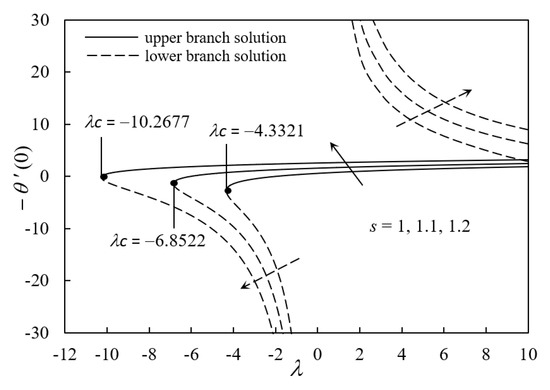 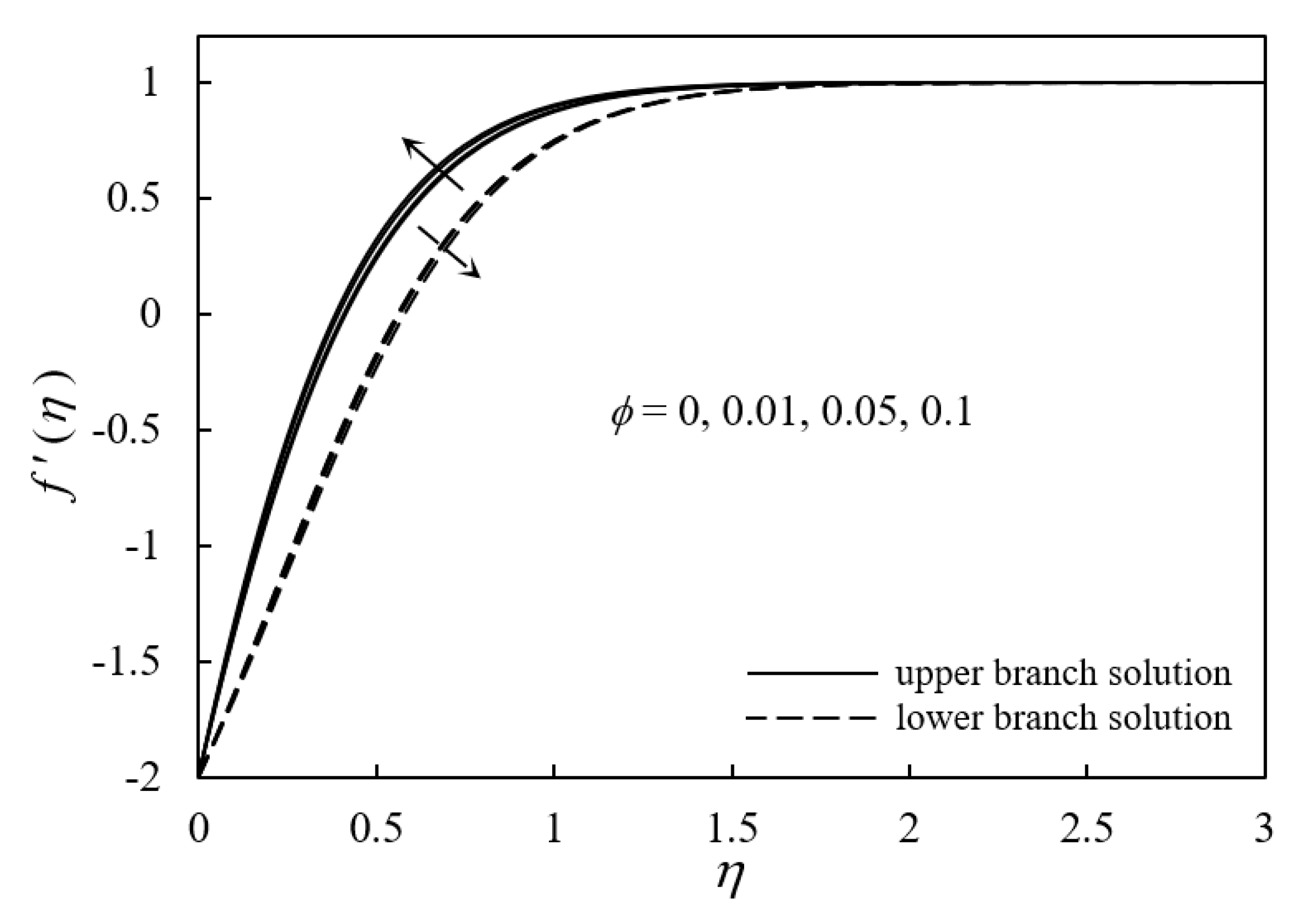 Table 4. Smallest eigenvalues when s = 1 and c = −2.
Table 4. Smallest eigenvalues when s = 1 and c = −2.
© 2020 by the authors. Licensee MDPI, Basel, Switzerland. This article is an open access article distributed under the terms and conditions of the Creative Commons Attribution (CC BY) license (http://creativecommons.org/licenses/by/4.0/).
We use cookies on our website to ensure you get the best experience. Read more about our cookies here.
Accept
We have just recently launched a new version of our website. Help us to further improve by taking part in this short 5 minute survey here. here.
Never show this again