There is no denial that renewable energy is considered to be the most cost-competitive source of clean power in many parts of the world. Saudi Arabia’s vision 2030 aims at achieving the best by using different sources of renewable energy such as solar energy, wind energy, and others. The use of solar energy in particular for power generation will decrease the dependency on oil, and thus, decrease the greenhouse gasses. Solar panels efficiency tends to decrease with the accumulation of dust on their surface. Thus, a cleaning process requires assigning and employing labor, which increases the cost of running as well as high cost of machinery. The current study focuses on assessing and designing a simple auto self-cleaning system in order to improve the efficiency of the solar panel. The results showed that for the Al-Khobar region, Eastern Province, Kingdom of Saudi Arabia, the efficiency of the solar panels after cleaning was increased from 6% to an average of 12% at nominal temperature of 27 °C. In addition, the average power output was increased by 35% during the day time. In addition, the normal efficiency of the solar panels before cooling was between 10% to 15% at 42 °C. After cooling, the temperature of solar cells decreased to 20 °C and the efficiency increased by 7%. Moreover, the output power was increased by 31% with maximum efficiency of 32% at noon time. View Full-Text
Keywords: renewable energy; photovoltaic systems; cooling; cleaning; efficiency; real case study renewable energy; photovoltaic systems; cooling; cleaning; efficiency; real case study
►▼ Show Figures 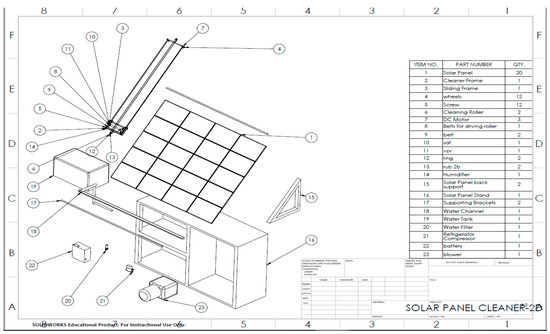