:
In traditional medicine, lung-moistening herbal medicines (LMHM) are regarded as a major option for treating symptoms of pulmonary fibrosis (PF) including dry cough and dyspnea. As PF agents are being applied to the development of lung cancer agents, PF and lung cancer are reported to have high pathological and pharmacological relationships. This study was proposed to identify candidates for the treatment of PF via investigating the effect of LMHM on PF mouse model. PF was induced by intratracheal instillation of bleomycin. Six water extracts of LMHM such as Farfarae Flos (FAF), Trichosanthis Semen (TRS), Lilii Bulbus (LIB), Adenophorae Radix (ADR), Asteris Radix (ASR), and Scrophulariae Radix (SCR) were prepared and administered (300 mg/kg) orally for 10 days after induction. The changes in body weight, histopathology, and immune cell of bronchoalveolar lavage fluid (BALF) were investigated. Among those, LIB and ADR significantly decreased the deposition of collagen and septal thickness of alveolar and terminal bronchiole. Moreover, SCR, TRS, LIB, and ADR decreased total cells, macrophages, and lymphocytes in BALF. Taken together, ADR and LIB could be the candidates to reduce PF. Further studies on their effects at different doses and analysis of their underlying molecular mechanisms are needed.
Keywords:
pulmonary fibrosis; bleomycin; herbal medicine; broncho alveolar lavage fluid; inflammation

Idiopathic pulmonary fibrosis (IPF) is a chronic progressive interstitial lung disease that causes chronic respiratory distress and cough, which leads to death due to hypoxia or myocardial infarction. It has been diagnosed by histopathologic and/or radiologic pattern of usual interstitial pneumonia (UIP) without an identifiable cause of lung injury [1]. In UIP, honeycombing and reticular opacity with/without traction bronchiectasis were mainly observed in high-resolution CT, and patchy dense fibrosis including fibroblastic foci, honeycombing changes, and normal parenchyma appeared mixed at a lower magnification of lung biopsy [2]. IPF itself is a fatal lung disease and also considered closely related to lung cancer [3]. The pathological similarity between IPF and lung cancer [4], the high prevalence rate of lung cancer in IPF patients, inducing IPF during the chemotherapy and radiation therapy for lung cancer patients, and the applicability of IPF agents to lung cancer treatments might be the evidence of intimate relationship in clinical applications or research [5,6].
However, pathological mechanisms have not been fully established. Currently, steroids, interferon-γ, N-acetylcysteine, and platelet-derived growth factor receptor blockers have been reported to show some effect, but no drug has proven to be effective. Clinically, pirfenidone and nintedanib have also been reported to reduce the progression of the disease, but the effect of these agents is debated [1,7,8].
In traditional medicine, IPF has been considered a chronic progressive disease with symptoms of dry cough and dyspnea due to lung Qi deficiency, lung Yin deficiency, lung dryness due to Yin deficiency or lung heat, blood stasis, phlegm, and dampness [9,10,11,12,13]. Moistening the lung, applied in treating cough caused by lung dryness, has been regarded as one of the key therapeutic approaches for symptom management of IPF [9,10,11].
In this study, we aimed to identify the therapeutic candidates for IPF by investigating the effects of several herbal medicines on overcoming lung dryness. We selected six medicines with moistening properties and confirmed, based on thorough literature review, that no pharmacological study on pulmonary fibrosis (PF) has been reported yet. Aqueous extracts of samples were administered orally to a mouse model of bleomycin-induced fibrosis, which is the most popular model for IPF [14].

The dried raw materials of the following six herbal medicines were obtained from Kyung Hee Herb Pharm (Kangwon-do, Korea), which are the same as those prescribed to patients in Kyung Hee University medical center (Seoul, Korea): Farfarae Flos (FAF), Trichosanthis Semen (TRS), Lilii Bulbus (LIB), Adenophorae Radix (ADR), Asteris Radix et Rhizoma (ASR), and Scrophulariae Radix (SCR). Two hundred grams of each herb were extracted by boiling in 1500 mL water for 2 h at 100 °C. The origin, used part, and extraction yield of each medicine are given in Table 1.

All animal experimental protocols were performed according to the guidance of Kyung Hee University Institutional Animal Care and Use Committee (KHUASP(SE)-18-177). Male ICR mice (7 weeks old, 31–33 g, DaeHan BioLink, n = 6) were used for the study. They were housed for 7 days before induction on a 12 h light/dark cycle with food and water supplied ad libitum. The animal model was induced using a modified method described in a previous study [14]. The mice were anesthetized using 2% isoflurane and administered the intratracheal instillation of bleomycin sulfate (2 mg/kg, 100 μL in sterile saline Dong-A Pharmaceutical Co., Seoul, Korea) for the induction of PF. The mice were randomly divided into 9 groups: (1) normal group, healthy mice without instillation and administration; (2) sham group, mice received sterile saline instillation without administration; (3) control group, mice received bleomycin instillation and distilled water (DW) administration; (4) six treatment groups (TUF, TRS, LIB, ADR, ASR, and SCR), mice received bleomycin instillation and sample administration (300 mg/kg). All samples were dissolved in DW and administered orally at a volume of 3.3 mL/kg simultaneously with lung fibrosis induction at first and then continued twice a day for 10 days. The sham and control groups were given the same volume of DW. Body weight was measured every day at 09:00 for 10 days.

The lung was isolated on the 11th day after induction and fixed with 4% paraformaldehyde. Lung slices (5-μm thick) were stained with hematoxylin and eosin (H&E) and Masson’s trichrome to measure histological changes. Ashcroft scales were measured by two researchers, blinded to the experimental groups according to previous studies [16,17]. Collagen fiber area (%) of left lung was measured using ImageJ software (1.43u, NIH) according to a previous study [18].

BALF was obtained by infusing the lungs three times with 0.5 mL of cold phosphate-buffered saline (pH 7.2) and recovering it using a 20-gauge catheter. The fluid recovery rate was more than 85%. The total cell count was measured using a hemocytometer after methylene blue staining. After confirming that the cells were collected on the slide, H&E-stained total cells, macrophages, lymphocytes, neutrophils, and eosinophils were counted in a double-blind manner using a microscope (200×).

All the results are presented as mean ± SEM. A one-way ANOVA followed by a Dunnett’s test using GraphPad Prism v.5.0 (GraphPad Software) was used to compare each group to the control group.

The body weight of mice in PF groups decreased immediately after induction while that of mice in normal and sham groups increased continuously. Compared to the control group, all sample treated groups showed the tendency of body weight recovery, but the recovery was not significant (Figure 1A).
The bleomycin-treated control group showed a marked-thickening of the alveolar wall, collapse of alveolar, deposition of inflammatory cells, fibrotic changes (visualized by staining lung sections with H&E), and collagen deposition (visualized by staining lung sections with Masson trichrome). All sample-treated groups showed a decreased damage score; especially, LIB and ADR showed a significant decrease on the Ashcroft scale compared to the control group (p < 0.05, <0.01) (Figure 1B–D).
Collagen fiber area of left lung also showed similar result with that of Ashcroft scale (Figure 1F). LIB and ADR also showed a significant decrease on area of collagen fiber compared to the control group (p < 0.05, <0.01) (Figure 1A,F).
Eleven days after lung fibrosis, the number of total cells, macrophages, and lymphocytes in BALF of the control group increased compared to that in normal and sham groups (p < 0.001). All sample-treated groups showed decreased cell numbers in BALF compared to the control group. A significant decrease in total cell number in BALF was observed with LIB, ADR, TRS, and SCR compared to the control group (p < 0.05, <0.01, and <0.001) (Figure 2B). Moreover, a significant decrease in macrophage number in BALF was observed with LIB, ADR, and SCR compared to the control group (p < 0.05, and <0.001) (Figure 2C). However, only LIB showed a significant decrease in lymphocyte number in BALF compared to the control group (p < 0.01 and <0.001) (Figure 2D).
In this study, LIB and ADR showed significant effects on the Ashcroft scores in PF mouse model. However, other samples did not show significant effects on fibrotic change. Bleomycin, an anti-cancer agent, is known to be one of the most used inducers of PF animal model with the advantage of short-term PF [14]. The pathogenesis of PF induced by bleomycin is reported to show inflammation between 7 and 9 days and then progress to pulmonary parenchyma and interstitial fibrosis [19]. In this study, LIB and ADR reduced scores on the Ashcroft scale, which is frequently used to evaluate the extent of fibrosis on a scale of 0 to 8 in randomly chosen sections regardless of the staining tool (Masson’s trichrome or H&E) used [20].
Moreover, in the present study, all sample treated groups showed a tendency to decrease immune cells in BALF. TRS, LIB, ADR, and SCR decreased total cell number; LIB, ADR, and SCR decreased macrophages; and LIB decreased lymphocytes. PF due to bleomycin is most clinically similar to IPF and has the advantage of inducing short-term PF in animal studies [14]. In PF, inflammation is the predominant factor that leads to fibrosis. Alveolar inflammation related to alveolar macrophages, neutrophils, lymphocytes, and other inflammatory cells of the alveoli is known to precede fibrosis of the lung parenchyma and interstitial tissue [19]. Thus, the medicines that decrease the inflammatory cells in BALF might be closely related to the inhibition of fibrotic change in the lung.
In traditional medicine in Korea, China, and Japan, there is no concept of the IPF disease. However, PF characterized with dry cough and dyspnea could be translated to Lung Yin deficiency syndrome, which is also characterized by similar symptoms according to disease identification and treatment in the traditional medicine of these countries [9,10,11]. Thus, herbal medicines used in the current study have Yin-nourishing and lung-moistening effects that showed the tendency of ameliorating bleomycin-induced PF. Especially, LIB and ADR showed significant inhibitory effects on the fibrotic change in the lung.
Taken together, LIB and ADR could be the major choice for the treatment of the symptoms in PF. However, further studies are needed to investigate the therapeutic range, the maximal effective dosage, and mechanisms of action.

This research was funded by a grant of Basic Science Research Program (NRF-2018R1A2B6009621) of the National Research Foundation of Korea (NRF) Funded by the ministry of Science and ICT. 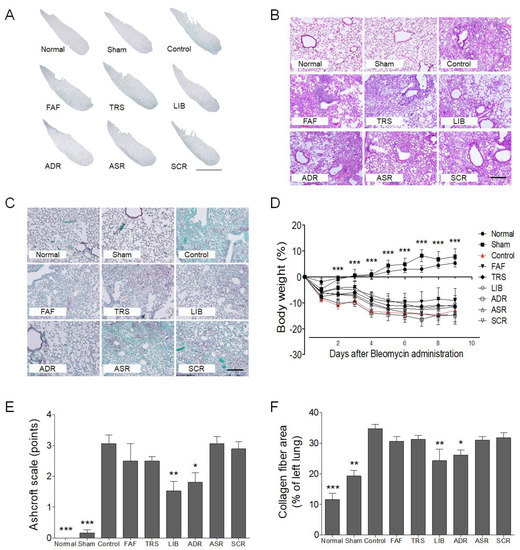 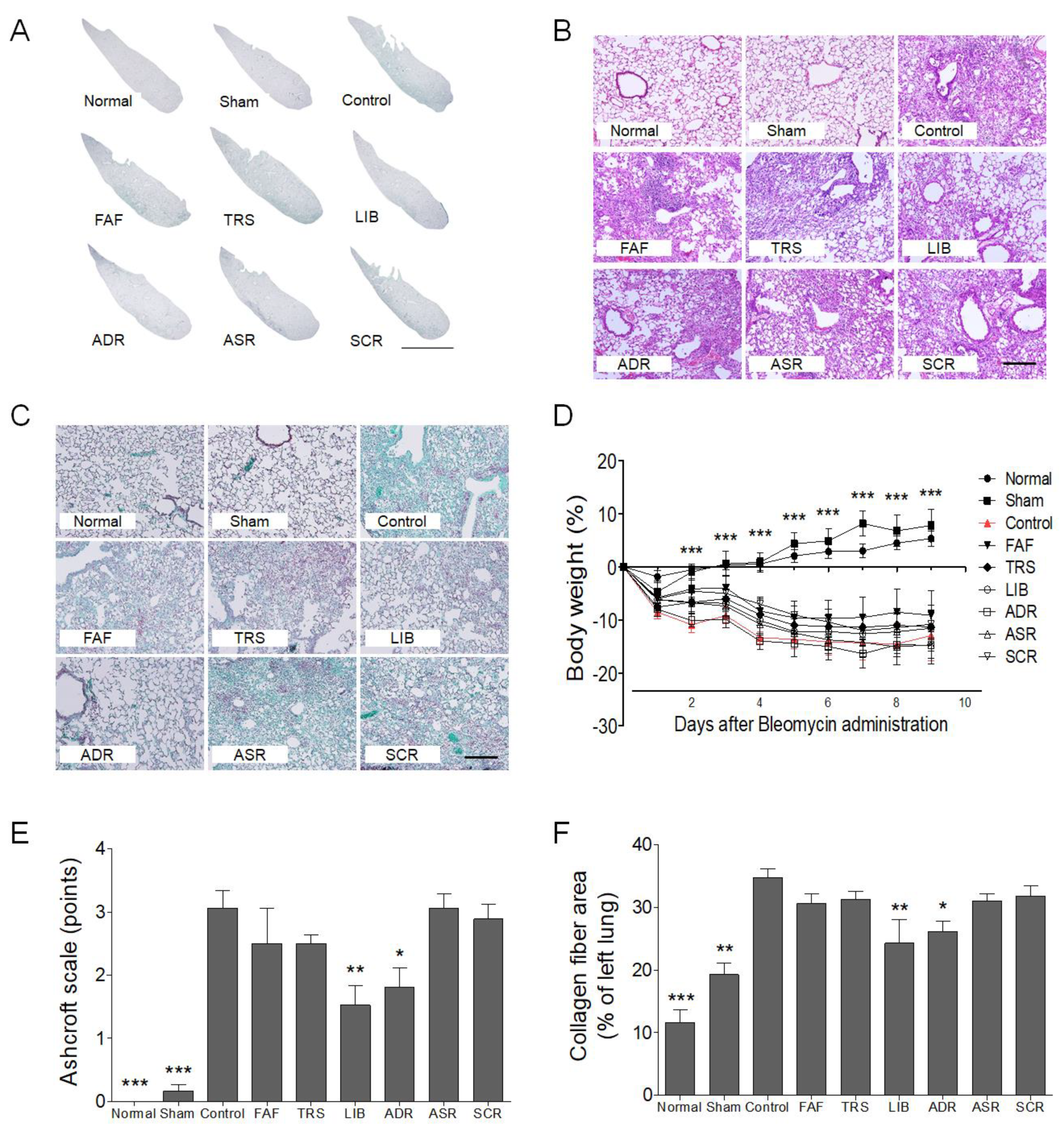 Table 1. List of herbal medicines.
Table 1. List of herbal medicines.
* Sample specimens and extracts were stored in the Department of Herbal Pharmacology, College of Korean Medicine Kyung Hee University.
© 2020 by the authors. Licensee MDPI, Basel, Switzerland. This article is an open access article distributed under the terms and conditions of the Creative Commons Attribution (CC BY) license (http://creativecommons.org/licenses/by/4.0/).
We use cookies on our website to ensure you get the best experience. Read more about our cookies here.
Accept
We have just recently launched a new version of our website. Help us to further improve by taking part in this short 5 minute survey here. here.
Never show this again