Fed-batch enzymatic hydrolysis has the potential to improve the overall process of converting cellulosic biomass into ethanol. This paper utilizes a process simulation approach to identify and quantify techno-economic differences between batch and fed-batch enzymatic hydrolysis in cellulosic ethanol production. The entire process of converting corn stover into ethanol was simulated using SuperPro Designer simulation software. The analysis was conducted for a plant capacity of 2000 metric tons of dry biomass per day. A literature review was used to identify baseline parameters for the process. The sensitivity of the ethanol production cost to changes in sugar conversion efficiency, plant capacity, biomass cost, power cost, labor cost, and enzyme cost was evaluated using the process simulation. For the base scenario, the ethanol unit production cost was approximately $0.10/gallon lower for fed-batch hydrolysis. The greatest differences were seen in facilities costs, labor costs, and capital costs. Using a fed-batch operation decreased facilities costs by 41%, labor costs by 21%, and capital costs by 15%. The sensitivity analysis found that cost of biomass had the greatest effect on ethanol production cost, and in general, the results support the proposition that fed-batch enzymatic hydrolysis does improve the techno-economics of cellulosic ethanol production.
Keywords: fed-batch hydrolysis; techno-economic analysis; cellulosic ethanol; process simulation fed-batch hydrolysis; techno-economic analysis; cellulosic ethanol; process simulation

Plant capacity was increased to observe the effect on the ethanol production cost. Assuming the same land area could produce extra biomass, the transportation distance and transportation costs did not change. The assumed location of the plant near Ravenna, Nebraska means availability of biomass is not expected to be a bottleneck, as this area is high in corn production. Hence, we assume additional corn stover availability is not problematic and transportation distance and costs will not change significantly. After increasing the input parameter for production capacity of the plant, SPD automatically resized the equipment within the process design as necessary. By increasing the plant capacity to 2500 metric tons per day, the ethanol production cost decreased by approximately $0.05/gal for the batch case and by $0.06/gal for the fed-batch case. Figure 4 illustrates the change in ethanol production costs as a result of increasing plant capacity.

The base case parameters within SPD are similar to the base case parameters in NREL studies [15,16]. To observe how the slight differences affected ethanol production cost, the costs of labor, power, enzyme, corn stover, and the annual operating hours were changed to better reflect the NREL studies. This sensitivity test has important implications for broader literature reviews of techno-economic studies. Different studies will use different input values to calculate their results, which poses challenges for making direct comparisons of the results across studies. The SPD base case values were compared with the NREL base case values in an effort to see how the different input parameters behave in exactly the same process flow sheet. This was done in hope of better understanding the implications of different input parameters when trying to compare separate studies. Table 4 shows the comparison between SPD base case values and NREL base case values. The NREL parameters resulted in a higher ethanol production cost for the batch and fed-batch processes, as seen in Figure 9. Of all the parameters changed, the feedstock cost had the greatest effect and the NREL base case values had a higher cost for the corn stover feedstock (see Table 4). This resulted in a higher cost for raw materials, and therefore, a higher production price for ethanol.

Throughout the sensitivity analysis, the response to the change in variables had about the same magnitude for both batch and fed-batch operations. The percent change in ethanol production cost from the base case to the adjusted parameter scenarios was roughly equivalent between the batch and the fed-batch processes (Figure 10). Since the changes were so uniform, the researchers conclude that SPD evaluates the batch and fed-batch processes in a similar manner. Figure 10 shows that the cost of biomass and cost of enzymes have the greatest impact on the unit production cost of ethanol.

This project is based on research that was partially supported by the Nebraska Agricultural Experiment Station with funding from the Hatch Multistate Research capacity funding program (Accession Number 1011053) from the USDA National Institute of Food and Agriculture.

The process flow sheet in Figure A1 is captured from the SuperPro Designer software. It shows the design of the ethanol plant used for this simulation study. This particular process flowsheet came from the fed-batch plant, though it looks identical to the batch process flowsheet. Hydrolysis reactions occur in the reactor labeled P-30/R-102 Vessel Procedure. To differentiate the batch from the fed-batch reaction, the operation data are changed. In the case of SuperPro Designer, this is as simple as checking the box marked, “Consider fed-batch supply of reactants” and modifying the input reaction parameters appropriately. 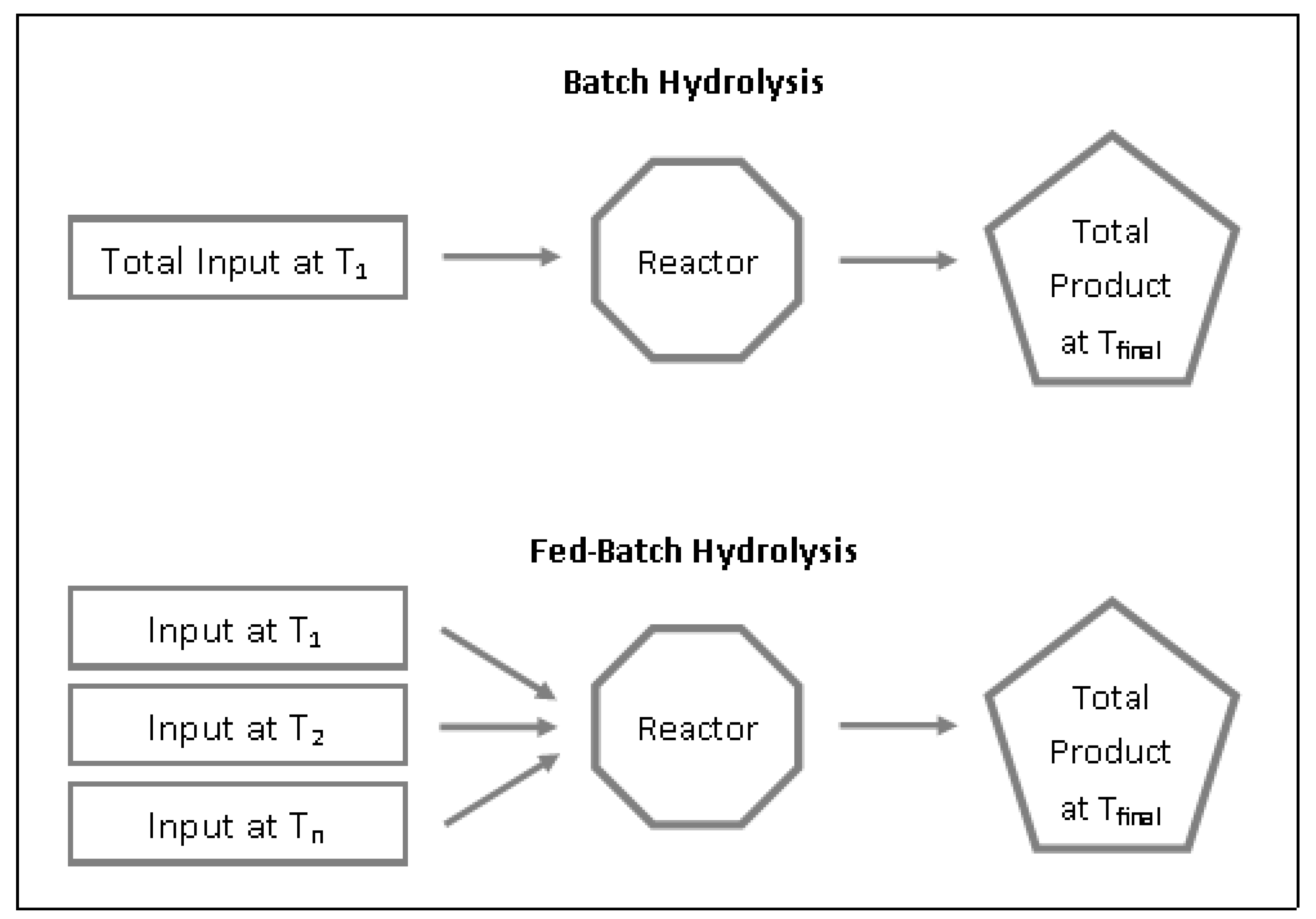 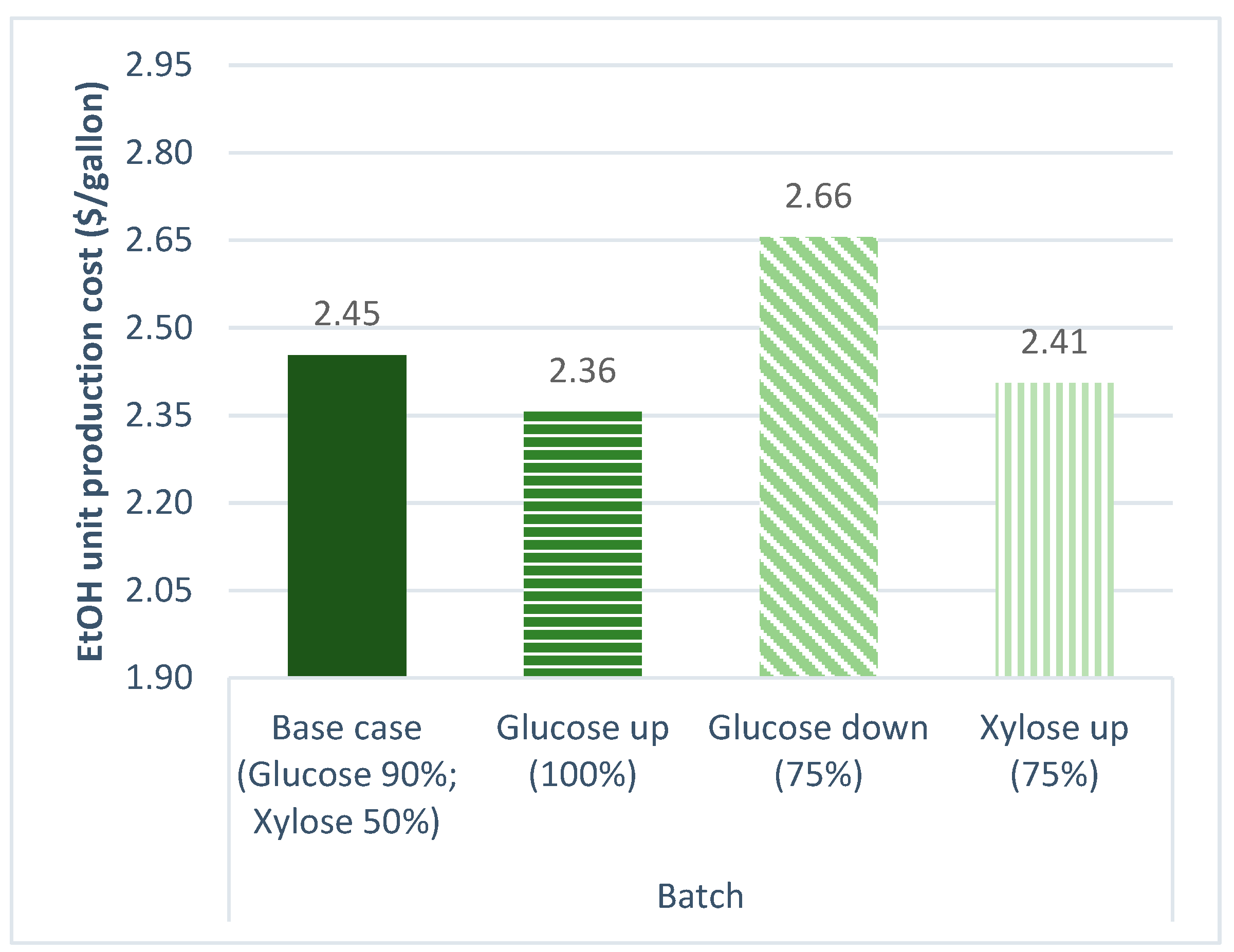 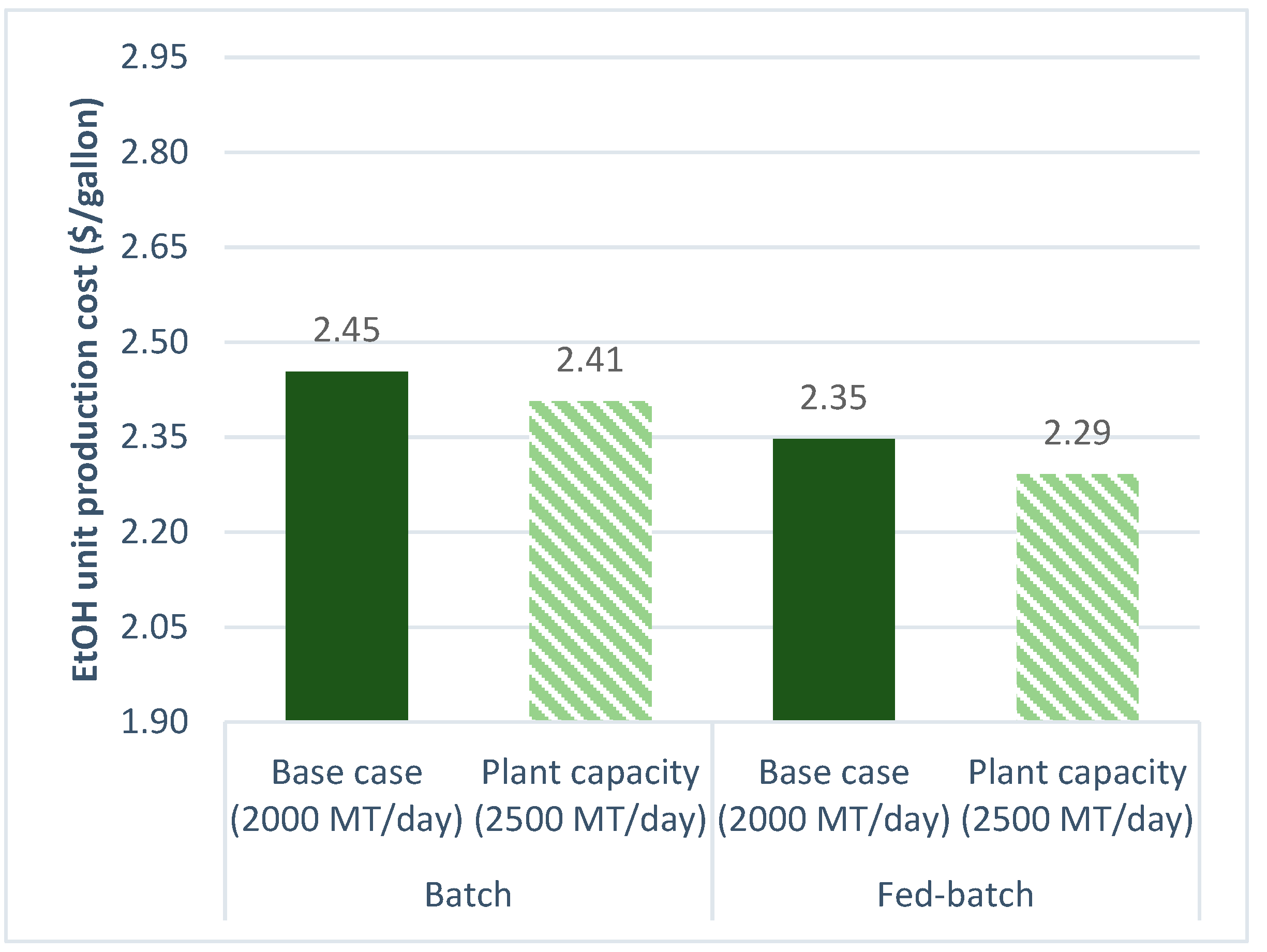 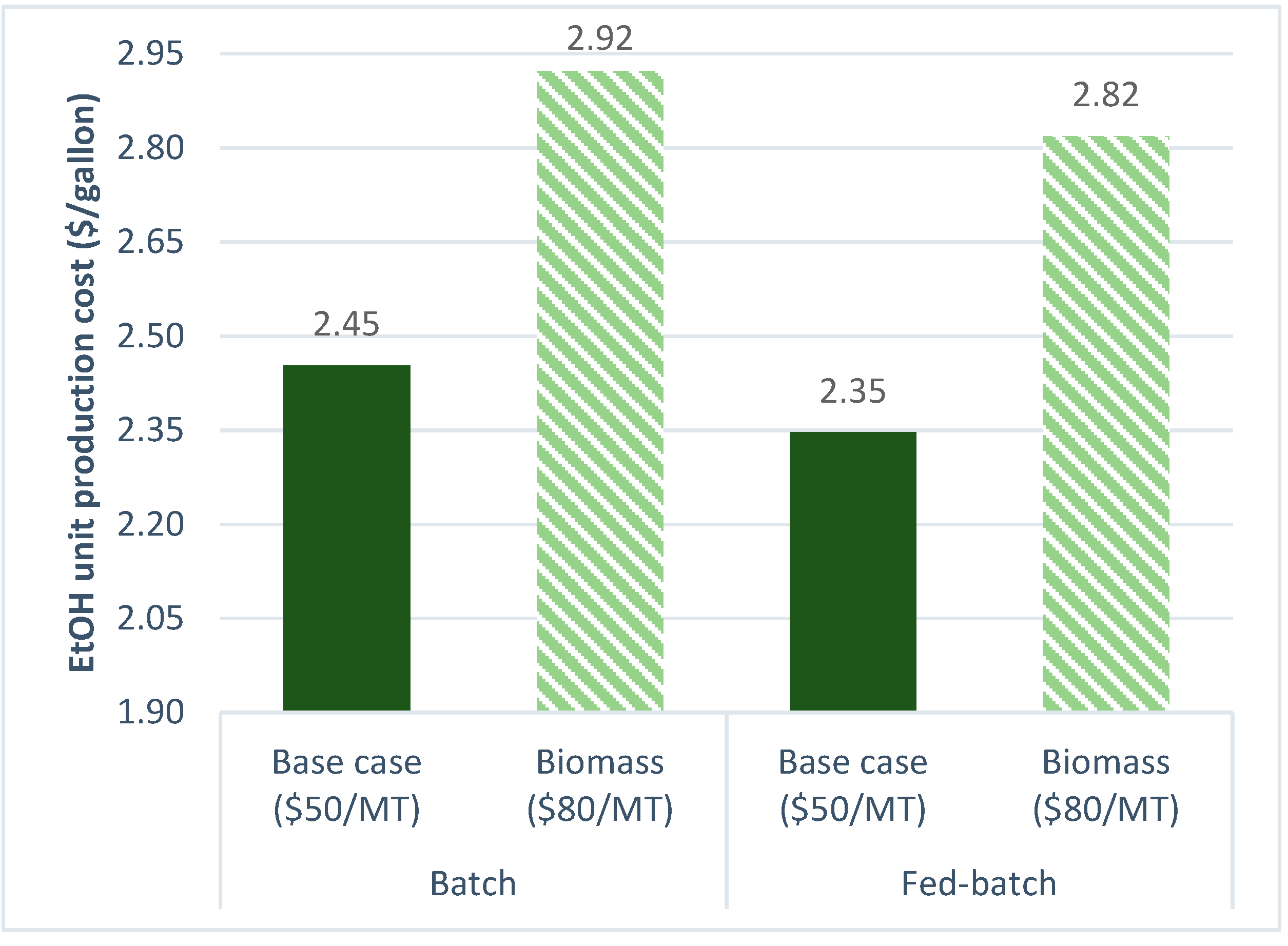 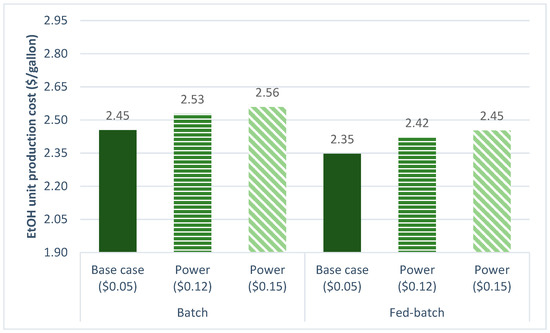 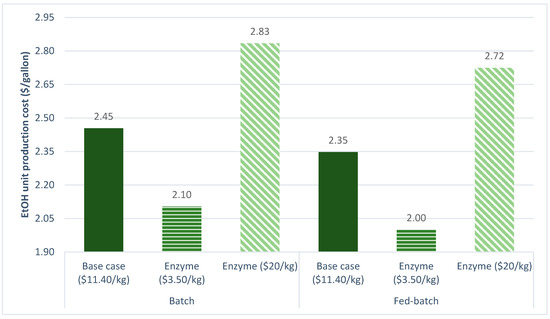 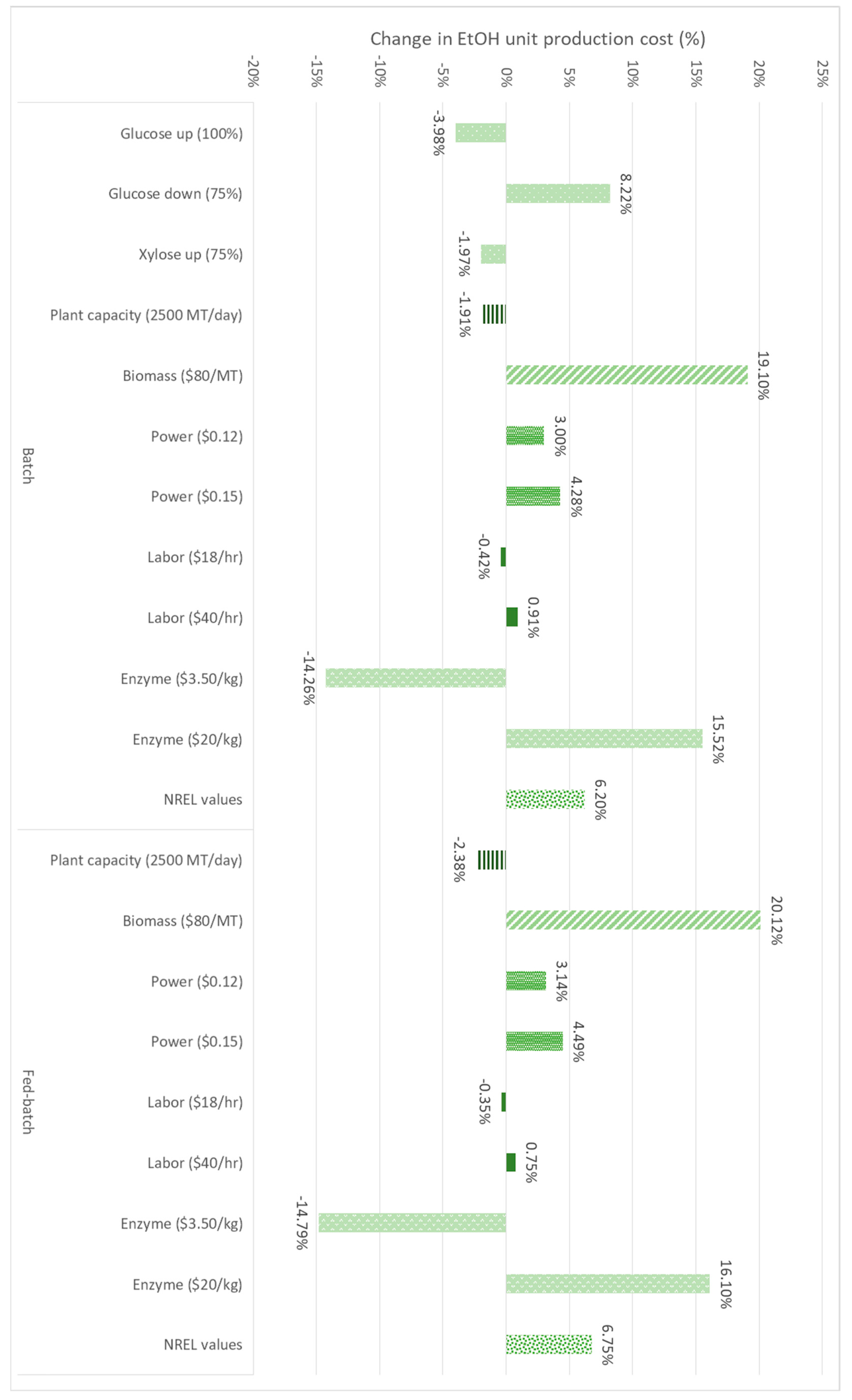