:
This work deals with the optimization of two-stage membrane systems for H2 separation from off-gases in hydrocarbons processing plants to simultaneously attain high values of both H2 recovery and H2 product purity. First, for a given H2 recovery level of 90%, optimizations of the total annual cost (TAC) are performed for desired H2 product purity values ranging between 0.90 and 0.95 mole fraction. One of the results showed that the contribution of the operating expenditures is more significant than the contribution of the annualized capital expenditures (approximately 62% and 38%, respectively). In addition, it was found that the optimal trade-offs existing between process variables (such as total membrane area and total electric power) depend on the specified H2 product purity level. Second, the minimization of the total power demand and the minimization of the total membrane area were performed for H2 recovery of 90% and H2 product purity of 0.90. The TAC values obtained in the first and second cases increased by 19.9% and 4.9%, respectively, with respect to that obtained by cost minimization. Finally, by analyzing and comparing the three optimal solutions, a strategy to systematically and rationally provide ‘good’ lower and upper bounds for model variables and initial guess values to solve the cost minimization problem by means of global optimization algorithms is proposed, which can be straightforward applied to other processes.
Keywords:
H2 separation; membranes; multi-stage process; optimization; design; operation; cost; membrane area; energy; mathematical programming; NLP; GAMS

Briefly, some main assumptions considered for modeling the membrane unit are the following: the permeability values correspond to the pure species and are not influenced by the operating pressure; steady state behavior; plug-flow pattern; constant total pressure at each membrane side. Regarding the mathematical modeling, the component mass balance in the membrane module is described by a set of algebraic equations obtained by discretization of the resulting set of ordinary differential equations employing the backward finite difference method (BFDM). The mathematical model that describes the process flow sheet illustrated in Figure 1 involves nonlinear constraints due to the presence of bilinear terms in the mass and energy balances (multiplications of concentrations and flow rates, and multiplications of enthalpies and flow rates) as well as equations to calculate costs. A complete list of the assumptions and the mathematical model used in this study to describe the membrane stages and the other process units (compressors, heat exchangers, etc.) can be found in Arias [18] and Arias et al. [15] and are also provided in Appendix A. Next, the considered cost model is presented.

The problem of TAC minimization considered in this work can be formally expressed as follows: where TAC is the objective function, x is the vector of model variables; hs(x) refers to the mass and energy equality constraints, and correlations for physicochemical properties estimation, design specifications, and cost estimation; gt(x) refers to inequality constraints which are employed to avoid concentration and temperature crosses in the process units. The H2 product purity target specification is parametrically varied between 0.90 and 0.95 through the parameter α, which is a fixed value in a particular optimization run.
By solving the problem given in Equation (15), the optimization results provide:
The problem of minimization of the total membrane area (TMA) can be formally expressed as follows: where TMA is the objective function, which is given by Equation (A32). The model variables x and constraints hs(x) and gt(x) have the same meanings as in the problem given in Equation (15). In this case, the optimization problem is solved for a H2 product purity target specification of 0.9.
Similarly, the minimization of the required total power (TW) is formulated as follows: where TW is given by Equation (A34).
It can be observed that the optimization problems given in Equations (15)–(17) only differ in the objective functions to be minimized.
The complete model describing the entire process contains 3952 equations (equality and inequality constraints) and 3274 variables. It was implemented in GAMS (General Algebraic Modeling System) (release 24.2.1, GAMS Development Corporation, Fairfax, VA, USA, 2013). [21] and solved with CONOPT 3 (version 3.14W, ARKI Consulting and Development A/S, Bagsvaerd, Denmark, 2012) which is based on the generalized reduced gradient algorithm [22]. Therefore, global optimality of the discussed solutions cannot be guaranteed because of the use of a local search NLP solver. To guarantee it, a global optimization algorithm must be used instead.

5.1. Optimal Solutions Corresponding to the Minimization of the Total Annual Cost

5.2. Influence of the Objective Functions on the Optimal Design and Operating Conditions

All authors contributed to the analysis of the results and to writing the manuscript. A.M.A. and P.L.M. developed and implemented in GAMS the generic mathematical model of a membrane module and the cost model, and collected and analyzed data. S.F.M. developed and implemented in GAMS the model of the whole process, and wrote the first draft of the manuscript. N.J.S. improved the discussion of results. J.A.C. contributed with numerical and solution issues. M.C.M. conceived and supervised the research and provided feedback to the content.

The assumptions considered for modeling the membrane units are [15]:

Figure A1a,b schematize the process configuration and the membrane module, respectively, that are modeled.

The equations describing the mass balance of component i in the membrane module MS1, by applying the backward finite difference discretization method, are:
ξi and AMS1 are the permeance of component i and membrane surface area, respectively. pH and pLMS1 are the operating pressures in the retentate and permeate sides, respectively. The index j refers to a discretization point which varies from 0 to 19 (J = 19, i.e., 20 discretization points is considered).
The second membrane stage MS2 is modeled in a similar way.
The mass balances in splitters SP1 and SP2 are:

Appendix A.2.3. Energy Balances and Transfer Areas of Heat Exchangers 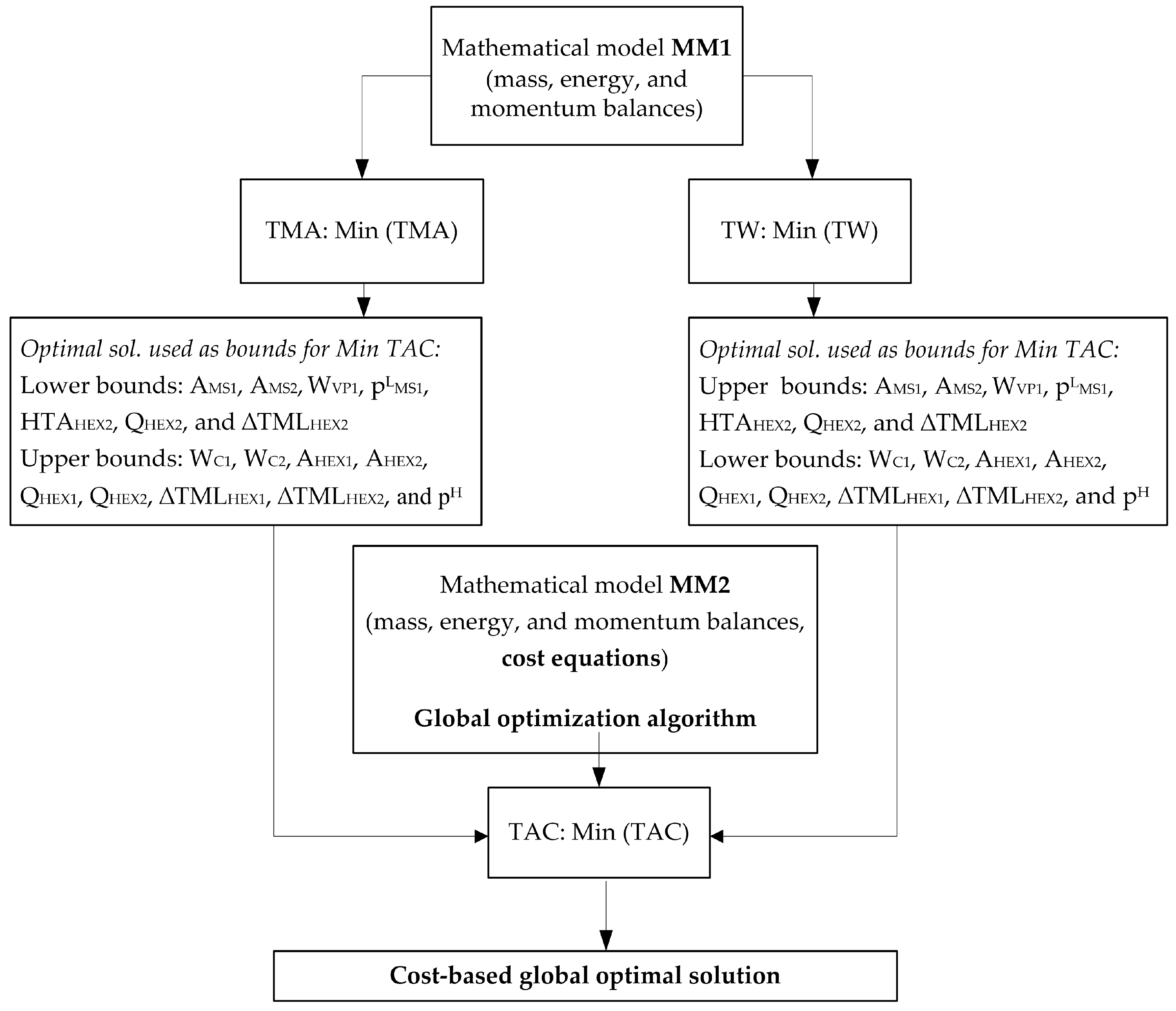