Mortality forecasting has always been a target of study by academics and practitioners. Since the introduction and rising significance of securitization of risk in mortality and longevity, more in-depth studies regarding mortality have been carried out to enable the fair pricing of such derivatives. In this article, a comparative analysis is performed on the mortality forecasting accuracy of four mortality models. The methodology employs the Age-Period-Cohort model, the Cairns-Blake-Dowd model, the classical Lee-Carter model and the Kou-Modified Lee-Carter model. The Kou-Modified Lee-Carter model combines the classical Lee-Carter with the Double Exponential Jump Diffusion model. This paper is the first study to employ the Kou model to forecast French mortality data. The dataset comprises death data of French males from age 0 to age 90, available for the years 1900–2015. The paper differentiates between two periods: the 1900–1960 period where extreme mortality events occurred for French males and the 1961–2015 period where no significant jump is observed. The Kou-modified Lee-Carter model turns out to give the best mortality forecasts based on the RMSE, MAE, MPE and MAPE metrics for the period 1900–1960 during which the two World Wars occurred. This confirms that the consideration of jumps and leptokurtic features conveys important information for mortality forecasting. View Full-Text
Keywords: stochastic mortality modelling; forecasting; Age-Period-Cohort model; Cairns-Blake-Dowd model; Lee-Carter model; Kou model; Jump Diffusion model stochastic mortality modelling; forecasting; Age-Period-Cohort model; Cairns-Blake-Dowd model; Lee-Carter model; Kou model; Jump Diffusion model
►▼ Show Figures 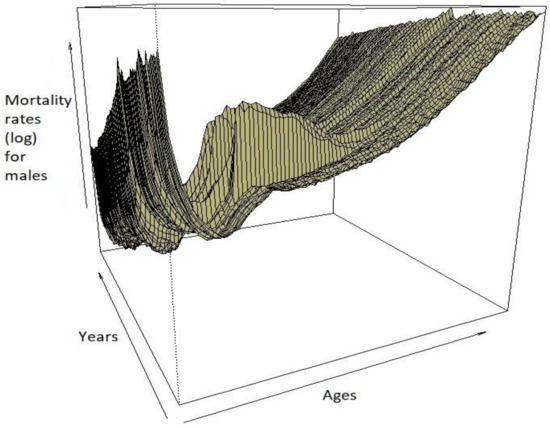