Analyzing the Gaver—Lewis Pareto Process under an Extremal Perspective

Implied Distributions from GBPUSD Risk-Reversals and Implication for Brexit Scenarios

Much of the debate around a potential British exit (Brexit) from the European Union has centred on the potential macroeconomic impact. In this paper, we instead focus on understanding market expectations for price action around the Brexit referendum date. Extracting implied distributions from the GBPUSD option volatility surface, we originally estimated, based on our visual observation of implied probability densities available up to 13 June 2016, that the market expected that a vote to leave could result in a move in the GBPUSD exchange rate from 1.4390 (spot reference on 10 June 2016) down to a range in 1.10 to 1.30, i.e., a 10–25% decline—very probably with highly volatile price action. To quantify this more objectively, we construct a mixture model corresponding to two scenarios for the GBPUSD exchange rate after the referendum vote, one scenario for “remain” and one for “leave”. Calibrating this model to four months of market data, from 24 February to 22 June 2016, we find that a “leave” vote was associated with a predicted devaluation of the British pound to approximately 1.37 USD per GBP, a 4.5% devaluation, and quite consistent with the observed post-referendum exchange rate move down from 1.4877 to 1.3622. We contrast the behaviour of the GBPUSD option market in the run-up to the Brexit vote with that during the 2014 Scottish Independence referendum, finding the potential impact of Brexit to be considerably higher. View Full-Text
Keywords: Brexit; foreign exchange options; implied distributions; forecasting; event risk Brexit; foreign exchange options; implied distributions; forecasting; event risk
►▼ Show Figures 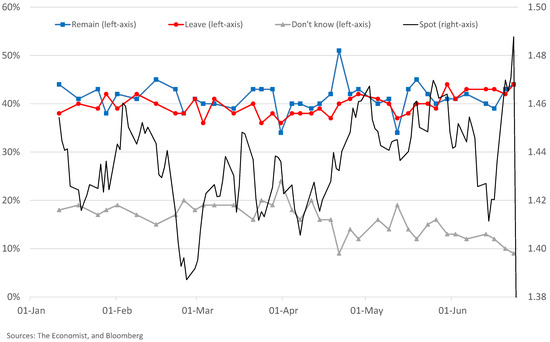