“Your Friends Do Matter”: Peer Group Talk in Adolescence and Gender Violence Victimization 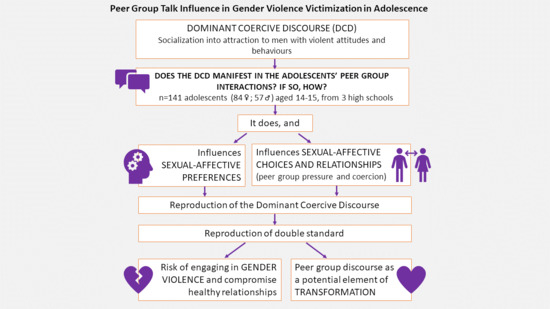 This study was conducted in the framework of the broader project MEMO4LOVE: Social interactions and dialogues that transform memories and promote sexual-affective relationships free of violence from high schools [30]. More specifically, the study reported here was part of the project’s objective 2: to analyze the characteristics of communicative interactions between adolescents in the context of secondary education schools that mediate the learning of attraction to violence, and the characteristics of those communicative interactions that mediate the learning of attraction to equality and wellbeing.
The object of study includes psychological and social processes that take place spontaneously in natural environments and cannot be observed while they occur without causing interference. In addition, we are analyzing not only the types of interactions that occur among adolescents, but also how they influence boys’ and girls’ thoughts and preferences, which entails a subjective dimension of the phenomenon. For this reason, data collection strategies focused on gathering adolescents’ perceptions and interpretations of the interactions that occur in the peer group and the effects that these have.
For this purpose, a series of variables to analyze the coercive dominant discourse were established by the researchers informed by the state of the art on this topic, which were used to create the data collection instrument that was developed to specifically address the aforementioned research objective. These variables included: changes in adolescents’ attraction and types of peer group interactions related to such changes; peer group pressure to engage in a sexual-affective relationship, type of relationship started as a result of such pressure, type of arguments used in peer group pressure and characteristics of the boys with whom the relationship started after pressure; type of masculinity preferred and group talk about attractive/convenient people. Data on these variables were collected based on adolescents’ responses, which were subsequently analyzed and interpreted by the researchers to identify associations between these variables that could indicate the existence or not of a coercive dominant discourse in the peer group interactions and, if existing, to define its main features.

The sample was composed of 141 adolescents from six classes of secondary education in three different secondary schools in a southern city in Spain (two public schools and one private school). Overall, 60% of the participants were girls and 40% were boys. Moreover, 93% of the adolescents in the sample were aged 14 (50%) or 15 (43%), although some students were already 16 (4%) or 17 (1%).
Previous to adolescents’ participation in the study, the selected schools were informed about the research objectives and potential social impact of the research, as well as the participation terms. Once the schools accepted to participate, the selected classrooms were informed about the project, and then informed consent from the participant adolescents’ parents or legal tutors, and informed assent from the participant adolescents were obtained. Anonymity and confidentiality were ensured throughout the data collection and analysis processes, as well as the psychological wellbeing of the participants. For this purpose, the research followed article 8 of the Charter of Fundamental Rights of the European Union about personal data protection, and the Directive 95/46/EC regarding the fundamental rights and freedom of persons and their right to privacy in personal data protection. The study was fully approved by the Ethics Committee of Andalusia Government (Secure verification code: eb4d0ea33a6f286ed96b583f094459bb1cb9678e).

Data were collected through a questionnaire designed in the framework of the MEMO4LOVE project. The questionnaire focused on the type of people that the peer group consider attractive, how the peer group talk about these people, and how peer interactions have an impact on adolescents’ preferences and choices in their first sexual-affective relationships. The questionnaire was composed of a total of 44 questions structured into 9 sections: 0. Personal data; 1. Ideas about attraction and love; 2. Characteristics of the people and relationships that are considered attractive or convenient; 3. Models of masculinity; 4. Mirage of upward mobility; 5. Peer group pressure; 6. Changes in attraction; 7. Characteristics of the boys you like; 8. Open question. These sections were created taking as references the main theoretical contributions on the preventive socialization of gender violence [8,12,21,31]. Questions were close-ended with multiple choice answers to allow quantitative analyses, except for the final open question, which allowed participants to add other relevant information. The questionnaire aimed at analyzing the characteristics of the communicative interactions among adolescents in relation to attraction to violence or to non-violence; therefore, most of the questions refer to “what the peer group thinks” or “how peers talk in the group”, and only in some of the questions (sections 6 and 7 mentioned above) participants are asked about their personal opinion. To facilitate the data collection, the questionnaire was responded to individually in the adolescents’ classroom during school hours.
To ensure content-related validity, the questionnaire underwent a validity expert judgement by experts in preventive socialization of gender violence—these experts were members of the Advisory Council of the project—and subsequently, the instrument was piloted with a small sample of adolescents of the same age as the study sample. As a result, the writing of some questions was refined, and the final version of the questionnaire was obtained.
For the purpose of analyzing the coercive dominant discourse in the peer group, 13 of the questions were analyzed, about the following topics: Group talk about attractive/convenient people, Group pressure to engage in a relationship, Influence of peer group interactions on adolescents’ attraction, and Preference for a type of masculinity. Responses about the Influence of peer group interactions on adolescents’ attraction and about the Preference for a type of masculinity referred to respondents’ own experience and preferences, while responses about the other topics referred to talk and interactions in the peer group.

Data were analyzed with the SPSS statistical package. The responses obtained from the selected questions were analyzed using descriptive statistics, first each question individually and then crossed with the responses of other questions that could indicate manifestation of the coercive dominant discourse. Crosstabs were obtained, and frequencies and percentages were analyzed.
To analyze some of the multiple-choice questions, the responses were grouped into categories to allow a more significant interpretation of the data in terms of the objective of the study. This is the case of questions asking for characteristics (adjectives) describing group talk about certain boys and girls. Those adjectives were grouped into: adjectives reflecting violence (aggressive, possessive, tough, cocky, dominant, bad), adjectives reflecting non-violence (respectful, egalitarian, caring, sensitive, good), and neutral adjectives in terms of violence (romantic, confident, attractive, funny, flirt, strong, sweet, insecure, others). For the case of those questions, percentages were based on the responses and not on the cases (respondents).

The peer group also has an influence on adolescents’ sexual-affective choices and decisions and, in this domain, we also identify components of the coercive dominant discourse. Adolescents were asked if they knew cases of boys or girls having started a relationship as a result of peer group pressure. Specifically, the questions referred to pressure by female friends in the case of girls and by male friends in the case of boys, so we obtained data regarding group pressure by same sex friends to engage in sexual-affective relationships.

3.2.1. The Type of Relationship Started as a Result of Group Pressure is Related to the Way (More or Less Violent) that the Peer Group Perceives the Boy/Girl

3.2.2. The Type of Argument Used for Peer Group Pressure is Related to the Way (More or Less Violent) the Peer Group Perceives the Boy

The data reported in the article are results from the Research and Development Project “MEMO4LOVE: Social interactions and dialogs that transform memories and promote sexual-affective relationships free of violence from secondary education schools”, funded by the Spanish Ministry of Economy and Competitiveness (2016–2020). Project reference: EDU2016-75370-R.

The study was conducted according to the guidelines of the Declaration of Helsinki, and approved by the Ethics Committee of Andalusia Government (Secure verification code: eb4d0ea33a6f286ed96b583f094459bb1cb9678e, 21 January 2018).