The Use of Age Assessment in the Context of Child Migration: Imprecise, Inaccurate, Inconclusive and Endangers Children’s Rights
Next Article in Special Issue

Pre-teen children face stressors related to their transition from childhood to adolescence, with a simultaneous increase in academic pressure. The present study compared the immediate effects of 18 min of (i) high frequency yoga breathing with (ii) yoga-based breath awareness and (iii) sitting quietly, on (a) attention and (b) anxiety, in 61 pre-teen children (aged between 11 and 12 years; 25 girls). Attention was assessed using a six letter cancellation task and Spielberger’s State Trait Anxiety Inventory STAI-S was used to measure anxiety before and after the three practices, practiced on separate days. Repeated measures ANOVA, followed by Bonferroni adjusted post-hoc analyses showed an increase in total attempts and net scores after high frequency yoga breathing (p < 0.05), while wrong attempts increased after yoga based breath awareness (p < 0.05). Anxiety decreased comparably after all three interventions. The 25 girls in the group had the same trend of results as the whole group with respect to the attention-based cancellation task, while boys showed no, how since change. For both girls and boys, anxiety decreased after all three 18min interventions. The results suggest that high frequency yoga breathing could be a short, useful school based practice to improve attention and reduce anxiety. View Full-Text
Keywords: pre-teen children; attention; anxiety; yoga breathing; yoga based breath awareness; sitting quietly pre-teen children; attention; anxiety; yoga breathing; yoga based breath awareness; sitting quietly
►▼ Show Figures 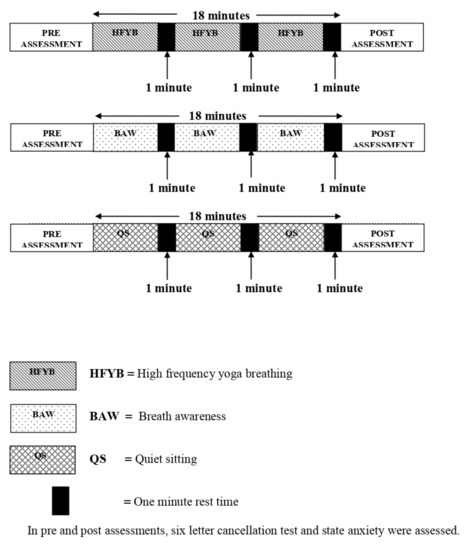