A Case of Spontaneous Pneumomediastinum with Subcutaneous Emphysema in Children

Spontaneous pneumomediastinum is defined as free air or gas contained within the mediastinum, which almost invariably originates from the alveolar space or the conducting airways. It is rare in pediatric patients; however, occasional cases are reported to result from forced Valsalva’s maneuver due to cough, emesis, a first attack of wheeze, or asthma exacerbations. We report the case of a 7-year-old previously healthy girl, with a history of persistent dry cough one day before, who was brought to our unit with face, neck and chest swelling. The chest X-ray and computed tomography (CT) scan showed subcutaneous emphysema with pneumomediastinum and pneumopericardium without evidence of the origin of this air leak. Laboratory tests and the bronchoscopy were normal. The patient was admitted in the pediatric critical care and received noninvasive monitoring, analgesia, oxygen, and omeprazole as a prophylaxis for a gastric ulcer. The patient improved, subcutaneous emphysema resolved, and she was discharged on the third day. View Full-Text
Keywords: emphysema; pneumomediastinum; pneumopericardium; Valsalva’s maneuver emphysema; pneumomediastinum; pneumopericardium; Valsalva’s maneuver
►▼ Show Figures 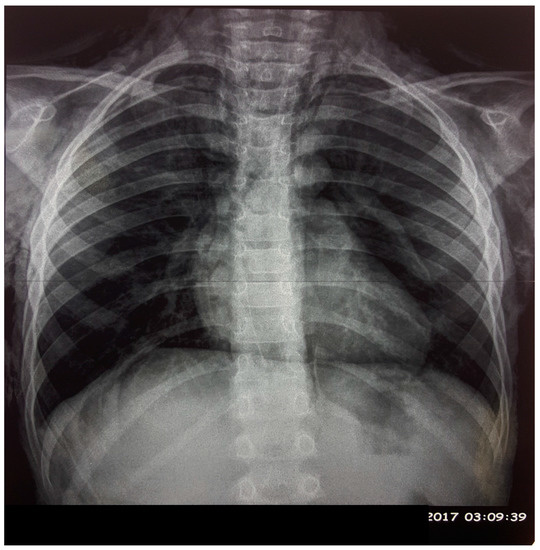