Diabetes mellitus (DM) is a group of chronic metabolic disorders that are characterized by hyperglycemia, defective insulin secretion and/or insulin action and strong correlation with higher risk of disease-related complications [1]. Long-term hyperglycemia in patients with diabetes confers a higher risk for chronic complications due to accumulations of toxic substances in tissues, which are irreversible and lead to microvascular (retinopathy, nephropathy, and neuropathy) or macrovascular (coronary heart disease, peripheral vascular disease, and stroke) diseases [2,3,4]. The significant physiological impairment associated with hyperglycemia has been traditionally linked to impaired wound healing. Prolonged hyperglycemia causes endothelial dysfunction, leading to downregulation of pro-angiogenic signature and induction of oxidative stress [5]. Wound healing is a multifaceted dynamic repair process of skin barrier breach that involves significant physiological events such as growth factors and cytokines in response to cellular immunity. In addition to immune response activation, impaired wound healing leads to overproduction of matrix metalloproteinases (MMPs), resulting in extracellular matrix degradation and failure to generate skin re-epithelialization [6,7,8]. Although the comprehensive knowledge of the pathological process of diabetes has been well clarified, commercially available therapeutics mainly focus on the transient hypoglycemic effect. An effective strategy for preventing diabetic complications has not yet been developed [3,9,10]. Therefore, identifying a potential therapeutic candidate for preventing and delaying the onset of DM and its complications is of great interest.
Emerging studies have focused on naturally occurring phenolic substances to provide a pharmaceutical strategy for treating metabolic disorders [11,12]. Flavonoids are a vast and ubiquitous group of phytonutrients. As a member of the flavonoid group, luteolin (3′, 4′, 5, 7-tetrahydroxyflavone) exhibits a wide spectrum of biological benefits, including anti-inflammatory, anti-oxidative, anti-carcinogenic, anti-allergenic, vasoprotective, and neuroprotective effects, that may be attributed to the presence of diverse chemical entities [13,14,15,16]. In in vitro and in vivo models of ischemic-induced cell injury, luteolin suppresses the secretion of tumor necrosis factor (TNF)-α, interleukin (IL)-6, and inducible nitric oxide synthase (iNOS) in lipopolysaccharide (LPS)-activated macrophages [17,18]. Luteolin also inhibits the neutrophil extracellular traps (NETs) in activated human neutrophils, reduces oxidative stress, and enhances immune defense by inhibiting the production of reactive oxygen species (ROS) [13]. In addition to its radical scavenging capacity, luteolin exerts great potential against multiple malignancies, activating cell-death pathways and cell cycle arrest, blocking angiogenesis and influencing tumor development by mediating insulin-like growth factor (IGF), platelet-derived growth factor (PDGF), and fibroblast growth factor (FGF) [19,20]. Interestingly, luteolin also contributes to anti-diabetic action, owing to its anti-oxidative capacity, as it targets signature cascades of AMP-activated protein kinase (AMPK), growth factors, cytokines, and p53-generated ROS and superoxide dismutase 1 (SOD1) [21,22,23,24].
Thus, luteolin is a promising candidate for ameliorating oxidative stress and inflammation. However, the capacity of luteolin to promote cutaneous wound closure and its interaction with crucial factors involved in delayed wound healing under hyperglycemic conditions has not been clarified. In the present study, we proposed that luteolin restores the cellular redox status and suppresses the inflammatory cascade to exert healing-promoting effects and further explored the detailed mechanistic pathways.

Eighteen 8-week-old male Wistar rats weighing 250–300 g each were purchased from BioLASCO Taiwan Co., Ltd. (Taipei, Taiwan). Rats were housed in a controlled environment (23 ± 2 ℃, relative humidity 60%, 12 light/dark cycles) at the Experimental Animal Center of Chung Shan Medical University. The rats were acclimated for 7 days while being fed a laboratory chow diet and receiving water ad libitum. Subsequently, the experimental rats were randomly assigned to three groups: (a) non-DM (NDM) group, (b) DM group, and (c) DM with 100 mg/kg body weight luteolin administered intraperitoneally (DML) group (Santa Cruz, sc-203119C). For induction of diabetes, rats were fasted overnight and injected intraperitoneally with streptozotocin (STZ) (80 mg/kg) (Sigma-Aldrich, St. Louis, MO, USA) freshly dissolved in citrate buffer (pH 4.5). After the rats were fasted for 12 h (from 9 pm to 9 am), the blood collected from the tail vein was recorded to determine the fasting blood glucose on days 1, 5, 7, 10, and 14 of the experiment. After the 14-day treatment period, the animals were fasted overnight, then anesthetized with an overdose of inhaled carbon dioxide. The experimental procedures were approved by the Institutional Animal Care and Use Committee of Chung Shan Medical University on 07-Apr-2020 (IACUC Approval No 2310) and performed according to the ethical guidelines for animal experiments.

After the fast overnight, the rats were injected intraperitoneally with STZ (80 mg/kg) at 9 am. Two days after the successful induction of hyperglycemia (above 250 mg/dL), wound surgery was performed. The rats were anesthetized with isofluance administered via precision vaporizer. A 15 × 15 mm2 incision was made surgically in the skin on the dorsal thorax. For the treatment every day, the uncovered wound was rinsed with normal saline at 9 am before the rats were injected intraperitoneally with Luteolin (100 mg/kg). The wound diameter was determined with a digital caliper over 14 days. In addition, excisional biopsies of the wound were taken for histological and immunohistochemical examination. For mechanistic cascade analysis, tissue samples from the wound area were harvested on day 14 and stored at −80℃ until use. The rate of closure within the wound margins was evaluated on macroscopic images using Image J software.

To explore the in vivo anti-hyperglycemic effects of systemic luteolin administration, STZ-induced diabetic rats were supplemented with luteolin for 14 days. As shown in Figure 1, blood glucose levels were elevated, as incidence of hyperglycemia in DM and DML groups on day 1. We observed persistent hyperglycemia in the DM group, while blood glucose level significantly decreased in the DML group, compared to the DM group, on day 5. The results of this preliminary in vivo evaluation demonstrate the anti-diabetic activity of luteolin in STZ-induced diabetes.

To explore whether systemic luteolin administration improves wound healing in diabetic rats, a 15 × 15 mm2 wound was created and wound diameter was evaluated periodically during the experimental period. On day 14, the wound in the NDM group had completely healed. In the DM group, there remained a small incompletely healed wound. The wound surface significantly decreased following luteolin supplementation (DML group) in comparison with the DM group (Figure 2A). Moreover, continuous wound contraction was delayed in the DM group. Systemic luteolin administration improved delayed wound healing over 14 days (Figure 2B). On day 14, wound tissue was sampled and assessed for histological change. Microscopic evaluation with H&E staining showed that on day 14, there were large numbers of fibroblasts in the wounds of the NDM and DML groups with good re-epithelialization. However, the fibers in the DM group were in a disordered arrangement with poor re-epithelialization (Figure 3A). Masson staining showed deposition of collagen fibers at the wound site. The wounds in the DM group showed severely disordered collagen fiber arrangement and massive infiltration of inflammatory cells (black arrow). Wounds in the NDM and DML groups showed better and denser collagen fiber arrangement (Figure 3B). Compared with the DM group, NDM and DML groups showed fewer inflammatory cells (Figure 3C).

The cells infiltration of the observed wound is a typical sign of inflammation. Therefore, we explored whether accelerated wound healing in diabetic rats systemically administered with luteolin may be due to modulation of the inflammatory response. As shown in Figure 4, the histological analysis of STZ-induced diabetic rats systemically administrated with luteolin demonstrates a significant decrease in inflammatory cell infiltration when compared with the DM group. Compared with NDM group, immunoblotting results revealed high levels of inflammatory markers, including TNF-α, IL-6, and IL1-β, as well as MMPs (MMP-9), with activation of transcription factor NF-κB in the DM group which was attenuated by luteolin supplementation (Figure 4). Similarly, histological evaluation (Figure 3A) of skin wounds over 14 days confirmed full healing with low levels of TNF-α, IL1-β, and MMP-9 through downregulation of NF-κB in the NDM and DML groups, in contrast to the DM group (Figure 5). As impaired wound healing also induces oxidative stress, we further explored whether luteolin supplementation in STZ-induced diabetic rats modulates oxidative stress response. As shown in Figure 6, immunoblotting analysis showed that luteolin reversed the effects of reduced SOD1 and GSH-Px expressions, as well as Nrf2 phosphorylation in the DML group.

To corroborate the acceleration of the healing process in diabetic rats systemically administered with luteolin, we examined angiogenesis capacity and nerve regeneration in skin wound biopsy samples. The protein expression of VEGF was considerably higher in the DM group than in the NDM group, whereas systemic luteolin administration resulted in marked decreases in VEGF expression (Figure 7A). Immunofluorescence analysis with an antibody to the neuron cell specific marker UCH-L1 revealed higher UCH-L1-positive structure presenting within the section of skin wound biopsy in the DML group than in the DM group (Figure 7D). Similar effects were observed on immunoblotting analysis (Figure 7B,C).

The present investigation was the first to characterize the effect of systemic luteolin administration in diabetes-impaired cutaneous healing in STZ-induced diabetic rats, and further explored the associated regulatory mechanism. The improvement in the delayed wound healing process may be related to the anti-hyperglycemic, anti-inflammatory, and anti-oxidative effects of luteolin in rats with diabetes. Our findings also provide a new insight into the mechanisms of luteolin that are involved in improving wound repair. Luteolin appears to downregulate inflammatory mediators by inhibiting NF-κB expression, while upregulating antioxidant enzymes through activation of Nrf-2 phosphorylation (Figure 8). Moreover, we also provided biomarker of angiogenesis and neuronal regeneration for indicate recovery status in diabetic wound healing. Thus, luteolin is a promising candidate for treating diabetic wound injury.

This study is supported by the research grants CSH-2021-C-054 to H.-C.L. from the Department of Nutrition, Chung Shan Medical University Hospital, Taichung, Taiwan.

The experimental procedures were approved by the Institutional Animal Care and Use Committee of Chung Shan Medical University on 07-Apr-2020 (IACUC Approval No 2310). 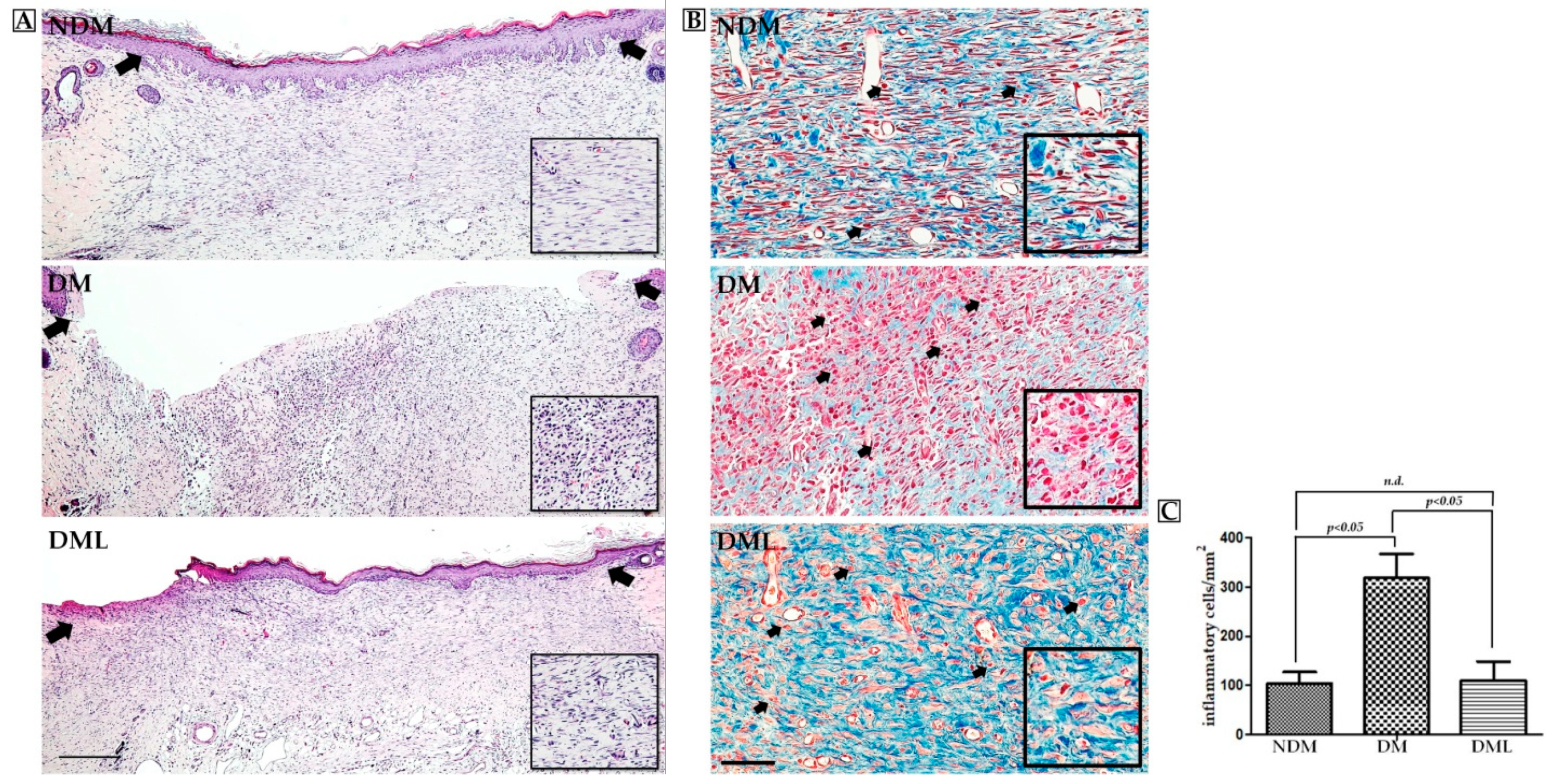 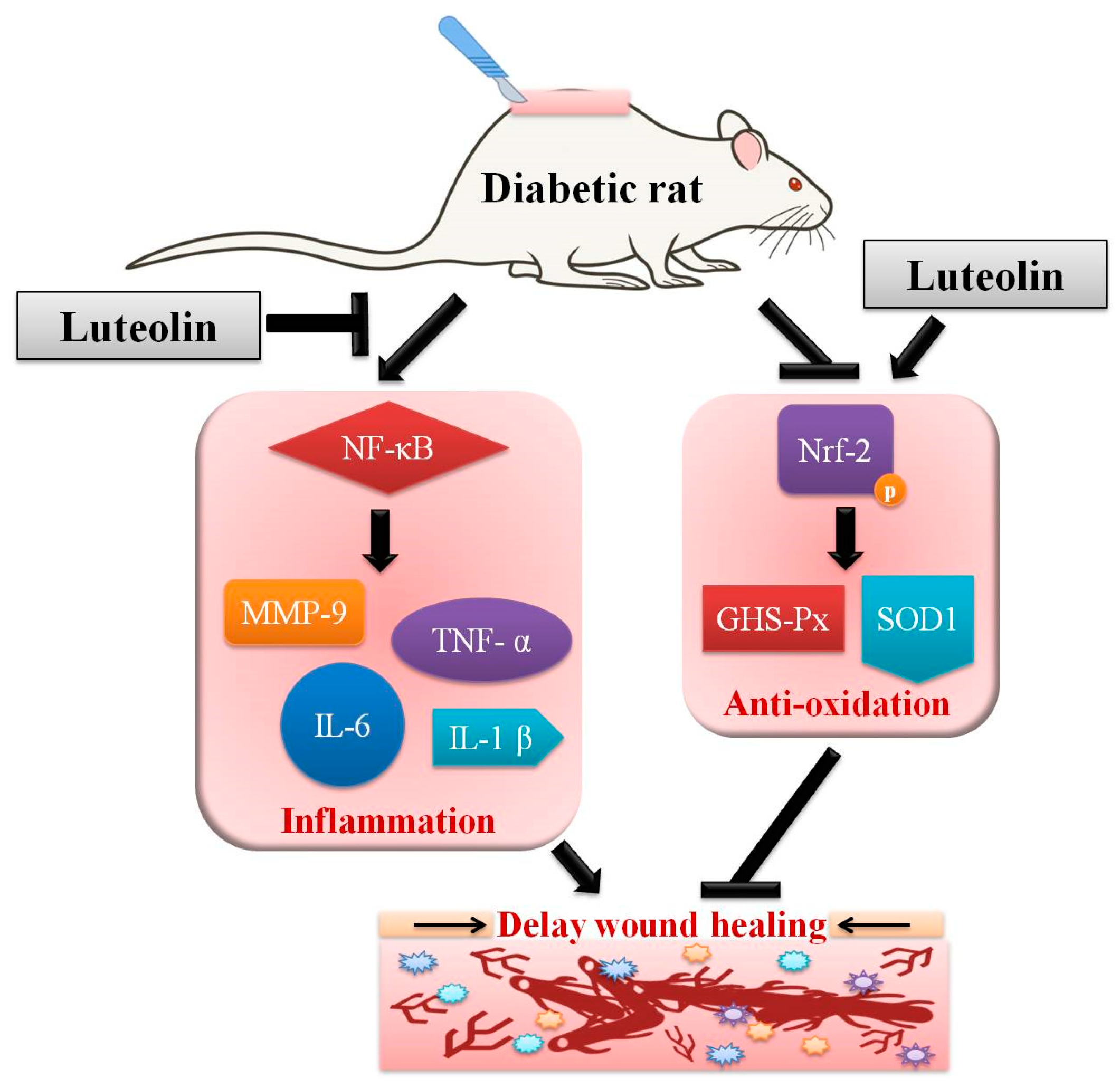