ME/CFS: Past, Present and Future
Previous Article in Special Issue

Middle-aged women experience menopausal symptoms, such as anxiety, depression, and insomnia, due to changes in hormone secretion. The risks of cardiovascular disease and lifestyle-related diseases, such as obesity, high blood pressure, and diabetes, are also increased [1,2]. Overproduction of reactive oxygen species (ROS) promotes age-related diseases, increasing the burden of psychological and physiological changes in postmenopausal women [3]. Malondialdehyde (MDA), a representative indicator of ROS, is a lipid peroxide that can damage cell membranes and macromolecules [4]. In contrast, to prevent excessive damage to cells due to ROS, antioxidant enzymes act as a defense system by reducing ROS to hydrogen peroxide and water through the generation of superoxide dismutase (SOD) and glutathione peroxidase (GPx) within cells [5]. Although the production of ROS and activities of the antioxidant enzymes are balanced in a healthy state, various stimuli can induce overproduction of ROS, leading to a reduction in antioxidant production. This in turn results in an imbalance in the oxidation–antioxidant system, otherwise referred to as oxidative stress [6]. This oxidative stress may induce an increased level of inflammatory markers including interleukin-6 (IL-6) and tumor necrosis factor α (TNF-α). As oxidative stress is closely related to the onset of disease, reduction in oxidative stress is important [7].
Regular physical exercise of moderate intensity is known to reduce oxidative stress-induced diseases by stimulating antioxidant defense systems, such as SOD and GPx [8]. Moreover, light to moderate intensity physical activity significantly increases GPx activity and decreases plasma oxidative stress in active compared to sedentary postmenopausal women [9]. In a study that analyzed the relationship between oxidative stress biomarkers and physical exercise in middle-aged men and women without cardiovascular disease, walking, dancing, and yoga showed decreased MDA levels, while walking and dancing were seen to be associated with increased SOD activity [10]. In addition, the level of oxidative stress markers improves as the frequency of exercise increases [10]. Thus, regular exercise helps improve the health of postmenopausal women by positively regulating the levels of their oxidative stress.
Taekwondo is a traditional Korean martial art which has been adopted as an official Olympic sport. To date, 207 countries have joined the World Taekwondo Federation [11]. Traditional forms of Taekwondo training are typically divided into poomsae and gyeorugi styles. While poomsae is a style that can be performed on the basis of pre-determined patterns and movements, gyeorugi, the official style performed in the Olympics, is the sparring form [12]. Various studies have shown that traditional Taekwondo training improves the health index of middle-aged adults. Chronic Taekwondo training has been shown to improve balance control in middle-aged adults aged >40 years [13]. In another study, a 16-week Taekwondo training program improved cognitive function in women aged >65 years [14]. In addition, Taekwondo training positively improved blood pressure levels and arterial stiffness in post-menopausal women with hypertension [15]. Thus, Taekwondo training has been proven to have a positive physiological effect on postmenopausal women.
In recent years, Kukkiwon has been striving to popularize new types of training methods such as Taekwondo gymnastics and Taekwondo self-defense, in addition to Taekwondo poomsae and gyeorugi. Moreover, as violent crimes increase in modern society, protecting oneself is becoming increasingly important. Despite the need for self-defense training, such training studies are scarce, and most have focused on the physical and psychological effects [16]. Our hypothesis was that Taekwondo self-defense training has additional effects on physiological changes in postmenopausal women, such as those related to oxidative stress and inflammation. Therefore, this study aimed to investigate the effect of a 12-week of regular Taekwondo self-defense training on oxidative stress and inflammation in postmenopausal women.

Twenty healthy menopausal women aged >45 years with no medical conditions participated in this study. Using the G*Power test (G* Power 3.1.9.7, Heinrich-Heine-University, Düsseldorf, Germany), the number of subjects required was calculated to be 14 (effect size (ES) = 0.40, α value = 0.05, and desired statistical power (1-β) = 0.80). The subjects were randomly classified into the control group (CG, n = 10) or the Taekwondo self-defense training group (TSDG, n = 10).
The eligibility criteria included (1) age > 45 years, (2) diagnosis of menopause through blood test, (3) no ongoing hormone replacement therapy, (4) no current participation in any regular exercise program, and (5) no history of musculoskeletal or cardiovascular disorders. The exclusion criteria were (1) failure to meet the criteria for participation in exercise intervention (less than 90% attendance) and (2) inability to continue exercise due to musculoskeletal disorders.
Eight individuals in each group were included in the final analyses, following exclusion of four individuals who had low training participation (n = 2) or who developed problems with their health (n = 2). Prior to the start of the study, participants were informed about the purpose, method, and procedure of this study, and all provided written informed consent to participate. This study was approved by the Institutional Review Board of Dong-A University (IRB No. 2-1040709-AB-N-01-201911-BR-017-06) All procedures were conducted in accordance with the 1975 Declaration of Helsinki. The specific experimental design is presented in Figure 1, and the characteristics of the study subjects are listed in Table 1.

The physical fitness test was conducted before and after the 12 weeks of Taekwondo training intervention. The specific measurements of physical fitness that were measured using a body composition analyzer before and after the 12 week training intervention were as follows: Body composition parameters such as height (cm), weight (kg), fat mass (kg), percent fat (%), and lean body mass (kg). Body mass index (BMI) was calculated using the formula weight/height (kg/m2).
Lower back strength, side-step, trunk flexion, and Sargent jump were performed twice in correct postures after full explanation of the accurate measurement methods. Exercises conducted in incorrect postures were not included in the results. Measurements were performed in reference to a previous study [17], and an improved record was used as a result. Briefly, lower back strength was measured to evaluate muscular strength with 0.1 kg accuracy. A side-step test was performed to evaluate agility, and the test was carried out for 20 s on a mat measuring 120 cm from the left and right around the centerline. Trunk flexion was conducted to evaluate flexibility with a 0.1 accuracy. The Sargent jump was conducted to evaluate power with an accuracy of 0.1. The measuring equipment for each physical fitness component is presented in Table 2.

After an 8 h fast, subjects were stabilized for 30 min after arrival at the laboratory, and then 10 mL of blood was drawn from the anterior vein. This was undertaken twice, before and after the 12-week Taekwondo training. The collected blood was centrifuged at 3000 rpm for 15 min to separate plasma and serum components.
ROS and antioxidant enzymes were analyzed for plasma MDA, SOD, and GPX, and inflammatory factors were evaluated for IL-6 and TNF-α. SOD activity was analyzed using a colorimetric assay using a commercial kit (706002, Cayman Chemicals, Ann Arbor, MI, USA) as previously described [19]. The serum was diluted 1:5 with a sample buffer, and 10 μL of standard and diluted samples were added to individual wells of a microtiter plate containing 200 μL of the radical detector. Thereafter, 20 μL of diluted xanthine oxidase was added into each well and mixed for a few seconds. The plate was covered with adhesive strips, and placed on a microplate shaker for 30 min at 37 °C. Finally, absorbance was measured at 450 nm using a spectrophotometer (Tecan Sunrise, TECAN GmbH, Salzburg, Austria). Plasma MDA (MBS263626, MyBioSource, San Diego, CA, USA), GPX (CSB-EL009866HU, CUSABIO, Wuhan, China), IL-6 (DY206-05, R&D Systems, Minneapolis, MN, USA), and TNF-α (DY210, R&D Systems, Minneapolis, MN, USA) levels were analyzed using a sandwich enzyme-linked immunosorbent assay as previously described [19]. Briefly, 100 µL of standards and samples were added to a microplate coated with a specific antibody and incubated for 2 h at 37 °C. Following incubation, the plate was washed three times, and 100 µL of the detection antibody was then added to each well and incubated further for 2 h at 37 °C. After washing three times, 100 µL of avidin conjugated horseradish peroxidase (HRP) was added and incubated for 2 h at 37 °C in darkness. Thereafter, washing was repeated three times, and 100 µL of substrate solution was added and incubated for 20 min at 37 °C in darkness. Finally, 50 µL stop solution was added to each well, and absorbance was read at 450 nm using a spectrophotometer.

The means and standard deviations of all data were calculated using SPSS (version 22.0; IBM Corp., New York, NY, USA). Normal distribution of all data was performed using the Shapiro–Wilk test, and an independent t-test was used to analyze differences in the characteristics of the study subjects. A two-way repeated analysis of variance (ANOVA) was undertaken to verify the differences in times and groups for each variable. Independent and paired t-tests were employed to determine significant differences. All statistical significance levels were set at α = 0.05.

3.1. Changes in Physical Fitness after 12 Weeks of Taekwondo Training Intervention

3.2. Changes in Oxidative Stress after 12 Weeks of Taekwondo Training Intervention

The levels of chronic inflammatory markers before and after the 12-week Taekwondo training intervention are depicted in Table 7. Inflammatory markers showed a significant difference across time by group interaction for TNF-α (F = 15.473, p = 0.001). Based on the post-hoc test, TNF-α was observed to be significantly lower after the intervention than before in the TSDG (p < 0.05). After the intervention, TNF-α levels in the TSDG were significantly lower than those in the CG (p < 0.05). However, IL-6 levels did not significantly differ across time by group interactions.

This work was supported by the Dong-A University research fund.

Prior to the start of the study, participants were informed about the purpose, method, and procedure of this study, and all subjects provided their informed consent to participate.

Data generated and analyzed during this study are included in this article. Additional data are available from the corresponding author on request. 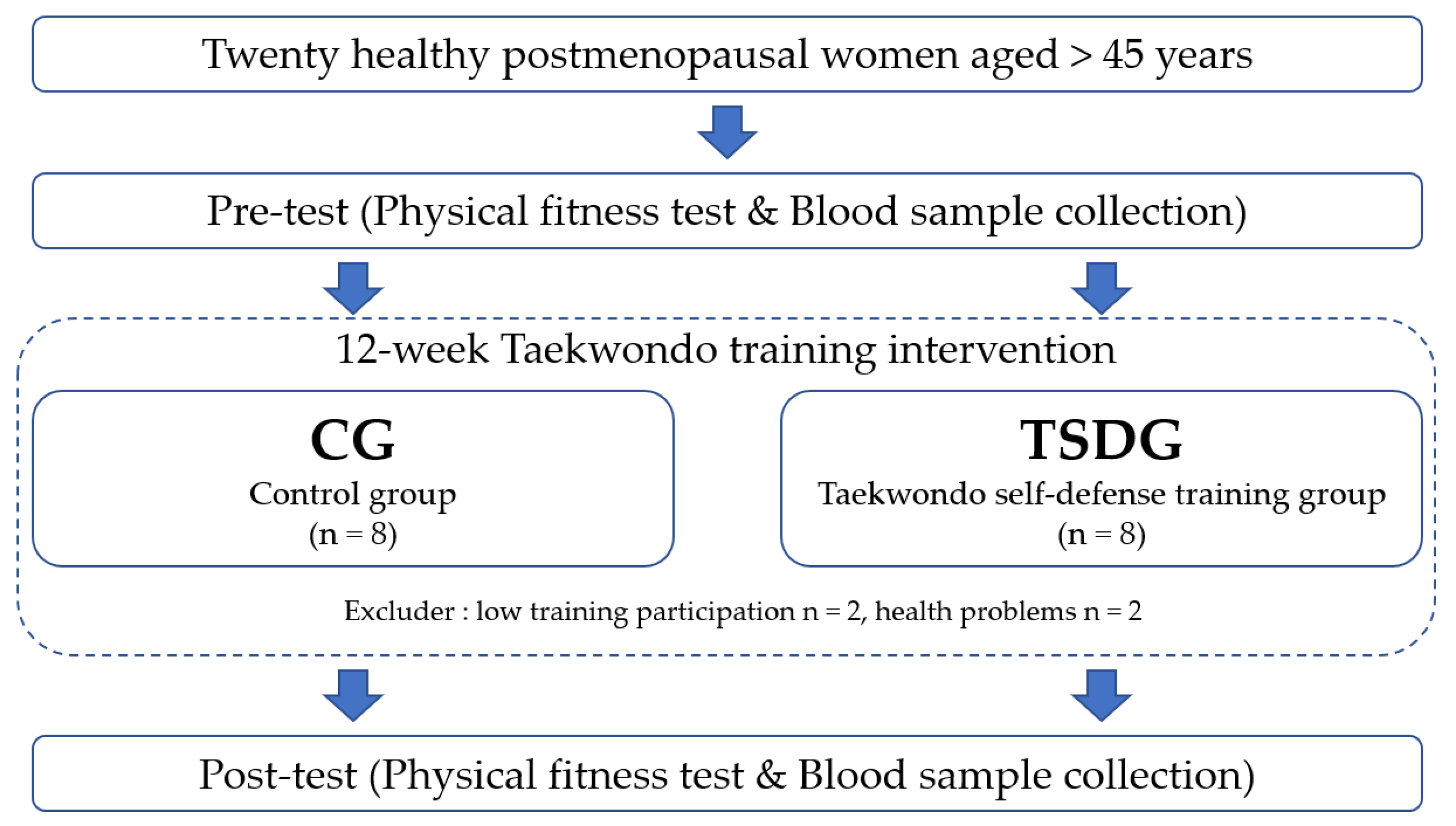