Falls are the main cause of susceptibility to severe injuries in many humans, especially for older adults aged 65 and over. Typically, falls are being unnoticed and interpreted as a mere inevitable accident. Various wearable fall warning devices have been created recently for older people. However, most of these devices are dependent on local data processing. Various algorithms are used in wearable sensors to track a real-time fall effectively, which focuses on fall detection via fuzzy-as-a-service based on IEEE 1855–2016, Java Fuzzy Markup Language (FML) and service-oriented architecture. Moreover, several approaches are used to detect a fall using machine learning techniques via human movement positional data to avert any accidents. For fuzzy logic web services, analysis is performed using wearable accelerometer and gyroscope sensors, whereas in machine learning techniques, k-NN, decision tree, random forest and extreme gradient boost are used to differentiate between a fall and non-fall. This study aims to carry out a comparative analysis of real-time fall detection using fuzzy logic web services and machine learning techniques and aims to determine which one is better for real-time fall detection. Research findings exhibit that the proposed fuzzy-as-a-service could easily differentiate between fall and non-fall occurrences in a real-time environment with an accuracy, sensitivity and specificity of 90%, 88.89% and 91.67%, respectively, while the random forest algorithm of machine learning achieved 99.19%, 98.53% and 99.63%, respectively. View Full-Text
Keywords: fall detection; fuzzy logic; machine learning; web services; real time; older adults fall detection; fuzzy logic; machine learning; web services; real time; older adults
►▼ Show Figures 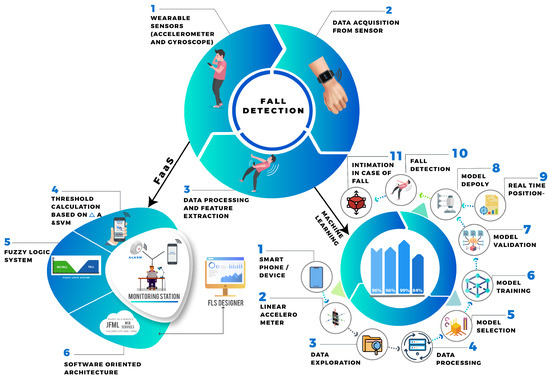